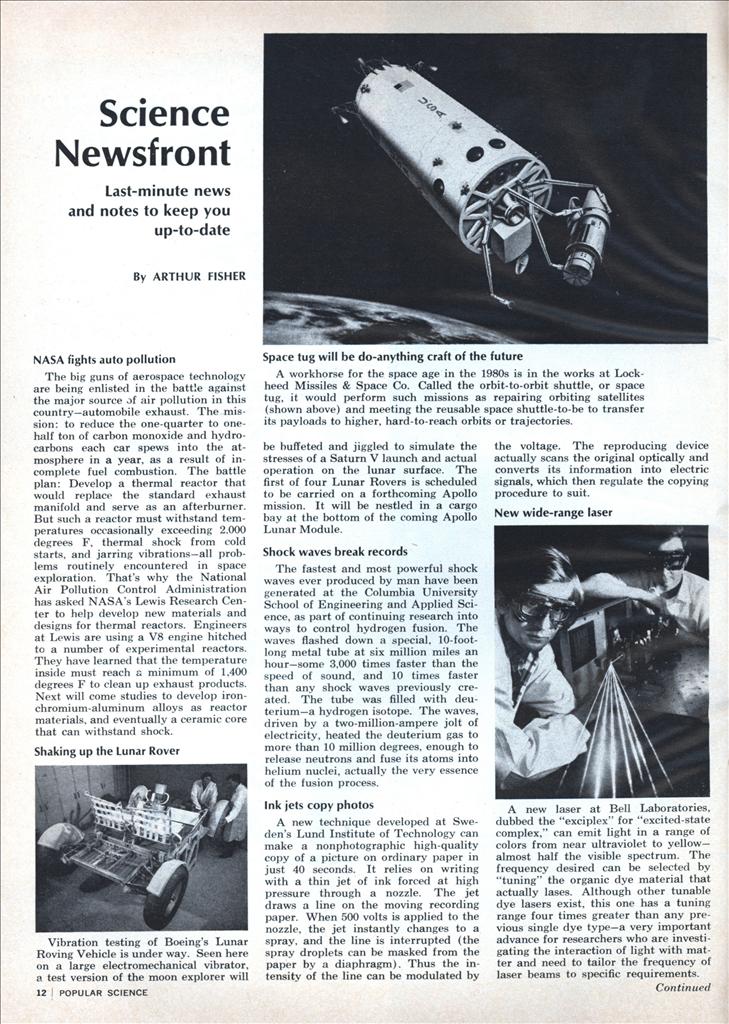 Last-minute news and notes to keep you up-to-date

The big guns of aerospace technology are being enlisted in the battle against the major source of air pollution in this countryâ€”automobile exhaust. The mission: to reduce the one-quarter to one-half ton of carbon monoxide and hydrocarbons each car spews into the atmosphere in a year, as a result of incomplete fuel combustion. The battle plan: Develop a thermal reactor that would replace the standard exhaust manifold and serve as an afterburner. But such a reactor must withstand temperatures occasionally exceeding 2,000 degrees F, thermal shock from cold starts, and jarring vibrationsâ€”all problems routinely encountered in space exploration. That’s why the National Air Pollution Control Administration has asked NASA’s Lewis Research Center to help develop new materials and designs for thermal reactors. Engineers at Lewis are using a V8 engine hitched to a number of experimental reactors. They have learned that the temperature inside must reach a minimum of 1,400 degrees F to clean up exhaust products. Next will come studies to develop iron-chromium-aluminum alloys as reactor materials, and eventually a ceramic core that can withstand shock.

Shaking up the Lunar Rover

The fastest and most powerful shock waves ever produced by man have been generated at the Columbia University School of Engineering and Applied Science, as part of continuing research into ways to control hydrogen fusion. The waves flashed down a special, 10-foot-long metal tube at six million miles an hourâ€”some 3,000 times faster than the speed of sound, and 10 times faster than any shock waves previously created. The tube was filled with deuteriumâ€”a hydrogen isotope. The waves, driven by a two-million-ampere jolt of electricity, heated the deuterium gas to more than 10 million degrees, enough to release neutrons and fuse its atoms into helium nuclei, actually the very essence of the fusion process.

A new technique developed at Sweden’s Lund Institute of Technology can make a nonphotographic high-quality copy of a picture on ordinary paper in just 40 seconds. It relies on writing with a thin jet of ink forced at high pressure through a nozzle. The jet draws a line on the moving recording paper. When 500 volts is applied to the nozzle, the jet instantly changes to a spray, and the line is interrupted (the spray droplets can be masked from the paper by a diaphragm). Thus the intensity of the line can be modulated by the voltage. The reproducing device actually scans the original optically and converts its information into electric signals, which then regulate the copying procedure to suit.

A new laser at Bell Laboratories, dubbed the “exciplex” for “excited-state complex,” can emit light in a range of colors from near ultraviolet to yellow-almost half the visible spectrum. The frequency desired can be selected by “tuning” the organic dye material that actually lases. Although other tunable dye lasers exist, this one has a tuning range four times greater than any previous single dye typeâ€”a very important advance for researchers who are investigating the interaction of light with matter and need to tailor the frequency of laser beams to specific requirements.

The rectangular chip you see almost lost on the face of a penny is a fullblown, infrared, continuous laserâ€”the first of its kind. Made from a crystal of semiconductor materials, it can operate from a dry-cell battery at room temperatures, and needs no cooling. Thus a whole unit with power supply might take up no more room than a pocket flashlight. Scientists at Bell Laboratories, where the mini-laser was developed, say it will run for years and will cost mere dollars to produce. This laser, or one like it, will probably see duty in the not-too-distant future in communications systems. A single laser beam can carry many thousands of electronic signals, including phone, radio, and TV communications.

Salting the oceans with gold

The U.S. Government is dumping gold into the oceans. No, it’s not a gigantic boondoggle, but a joint effort of the AEC and the Army Corps of Engineers to study the effects of ocean currents on coastline erosion and sediment flow. The researchers dump sand tagged with minute amounts of radioactive isotopes of gold in coastal waters a short distance offshore. Then underwater radiation detectors can trace its movement out to sea up to 1,500 feet and parallel to the coastline more than 8,000 feet. Only a quart of the glittery sand is needed to investigate an area of more than 500,000 square feet of water-borne sediments. The dispersal can be monitored for a week before dilution and the radioactive decay make the gold undetectable.

Fort to get honorable discharge The Departments of Defense and Health, Education and Welfare are reported to be planning to convert the super-secret Ft. Detrick, Md., facility into a civil labâ€”possibly for critical medical and environmental research. Ft. Detrick has been a center for research in chemical and biological warfare.