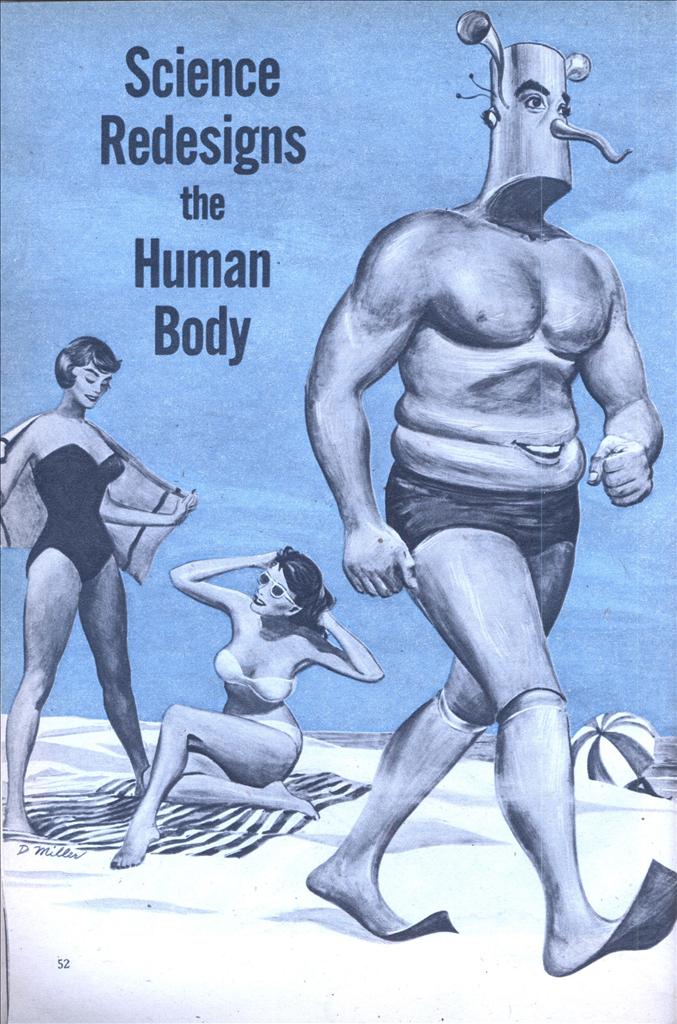 Some scientists, engineers and designers gripe about Nature’s masterpiece and suggest a few improvements.

ON A golf course last Fall, a New York accountant took a healthy swing at the ball, fell to the groundâ€” and couldn’t get up. He spent the next nine weeks in a hospital. Slipped spinal disc.

A mailman in Philadelphia was forced to turn in his resignation when fallen arches made walking unbearable.

In Chicago, an office worker running for a bus suddenly crumpled to the ground. He hobbled to a stoop and sat until help arrived. Dislocated knee, the doctor said.

Multiply each of these instances by several million and you will get a rough idea of the number of bad backs, sore feet and trick knees which abound in this country alone. It all adds up to the fact that, while the human body has never been equalled from the standpoint of all-around master engineering, a number of glaring weaknesses do exist in man’s basic equipment.

Listen to Dr. Wilton M. Krogman, professor of physical anthropology at the Graduate School of Medicine, University of Pennsylvania: “It has been said that man is ‘fearfully and wonderfully made.’ I am inclined to agree with that statement especially the ‘fearfully’ part of it. As a piece of machinery we are such a hodgepodge and makeshift that the real wonder is we get along as we do.”

How would scientists go about redesigning the human creature in order to get the most efficiency out of him?

MI tossed the intriguing problem into the laps of anthropologists, physiologists, engineers and industrial designers.

We got some fascinating answers!

“From the standpoint of load-bearing over a long period of time,” he asserted, “a basic weakness exists in man’s spine.” Many doctors and anthropologists agree, pointing out that man’s spine was fine when he was getting along on all fours a million or so years ago, but the upright posture puts an undue weight on it. “The result,” Mr. Rowland stated, “is that the spine now curves and sags and frequently gets out of kilter. From a designer’s point of view, I see no reason for a disjointed spinal column. Why not encase the spine in a tube of semi-flexible cartilege? Thus man’s spine would be a solid column, with a greatly increased load-carrying capacity. In addition, the vital nerves in the spine would be more fully protected against injury. Man would not be able to twist and turn as he does now but the semi-flexibility of the cylinder would allow enough bending for every ordinary purpose.

“And why,” asked Mr. Rowland, “couldn’t the brain be situated in the chest cavity, near the heart? Nearness to fuel supply is a fundamental principle in industry, so why not here?” There is another factorâ€”if the brain were in the chest, it would be far less vulnerable to injury.”

Man’s shape, then, would be altered rather drastically: The head would be a mere conning tower, probably be cylindrical, and the chest would have to be bigger. While redesigning the thorax Mr. Rowland brought forth another fairly radical suggestion: “Why is it necessary to have individual ribs? Why can’t man’s internal organs be protected with a device resembling a giant clamshell which can be opened easily for surgical purposes, be flexible enough to permit breathing and which would protect the vital organs a good deal better than the present lattice-work arrangement?”

Robert M. Wolff, an engineer and vice president of the Wolff Appliance Corp. of New York came out for an extra set of eyes in the back of the head.

“At present,” he said, “a human being’s range of vision is at most 180 degrees and it’s often much less than that. Why shouldn’t man’s vision be increased to a full 360 degrees?”

Ben Fromkin, a designer with the Burdick-Rowland firm, points out that man has trouble picking up small sounds emanating from the rear. Thus footpads, automobiles and falling objects may strike from behind without warning.

Why, asks Mr. Fromkin, couldn’t antennae be concealed in the head? These could pick up sound waves, lights and shadows, and relay them to the brain. The suggestion is not plucked from the blueâ€”grasshoppers and other insects have them.

Professor John L. Landgraf of the New York University anthropology department would like to see additional muscle strength across the lower abdomen to support the weight of the internal organs. This, he declares, might result in a thicker waistline, a fact which might dismay the girls, but it wouldn’t be too thick, and there would be no more pot bellies.

Another anthropology professor would widen the pelvis considerably, creating an anatomical construction something like the bustle of the last century. Powers models wouldn’t care for it, but the wider base would eliminate the present strain and the risk of hernia. And childbearing would be immeasurably easier, he asserts.

How about teeth? Declares British biologist Haldane: “Our teeth suffer from overcrowding, and that is one reason why they so often decay.” Haldane points out that man is probably evolving toward fewer teeth. “A good many people,” he says, “never cut their wisdom teeth and perhaps none of our descendants will.” Dentists consulted by MI agreed that 20 teeth would be an improvement over the present 32.

How about hair? Dr. Marion B. Sulzberger, one of the world’s foremost dermatologists, wrote recently that the “cost of upkeep of a nation’s hair may perhaps rival that of a nation’s army.” Some scientists believe that man is gradually evolving toward baldness anyway, as indicated by the gradual disappearance of hair on the rest of the body. Therefore, they say, why not get rid of the useless stuff now?

How about feet? Much too weak to support the rest of the body. Mr. Contini of N. Y. U. says the human arch could stand redesigning for added strength and durability. Mr. Rowland doesn’t see any need for the little toe and even for toenails. Originally they were claws, he says, but now they serve no purpose and often cause trouble.

How about knees? Doctors assert that something should be done about the knee’s habit of slipping out of whack, but anthropologists said there was no simple solution. Several suggested additional, stronger muscles. Most agreed that tampering with the knee joint might give it greater strength but would restrict its present freedom of movement.

In addition to these suggestions, the interviews resulted in a wild assortment of other ideas, many meant frankly for fun: Why not wings to enable man to get around (or over) the miserable traffic situation ? Why not protective covering for the eye, containing substances which would screen out harsh ultra violet rays? Why not built-in pockets, such as kangaroos have? Why not a small food storage compartment like the camel’s? Why not design the neck so that a human being can turn his head completely around?

From Raymond Loewy, the world-famous industrial designer: Not long ago, Mr. Loewy recalls, comedian Tom Ewell launched in a series of beefs about the body’s inadequacies. He suggested certain improvements, such as an eye on the end of the finger for looking over the heads of crowds. Mr. Ewell thereupon challenged Mr. Loewy to add other features and the designer and his staff took up the gauntlet. Reports Mr. Loewy: “We put hooks on heads for straphangers on subways who wanted to read the papers and we tried an extra pair of hands coming out of ears to hold hats in high winds.”

From an architect: “Man’s nose is a weak point. Air going into the lungs must make a hairpin turn in the nostrils; the results are several kinds of sinus troubles and what-have-you. So why not a long snout to help do away with this awkward turn and the resultant ills?

From a radio engineer: why not folding ears something like the old-fashioned ear trumpet to catch low-pitched sounds? We called a halt to the investigation when one famed designer came up with this: “Why not detachable arms so that you can sleep in comfort, a spare, smaller-sized head in case your hat shrinks and a small hand in your back so that you can scratch hard-to-reach itches?”