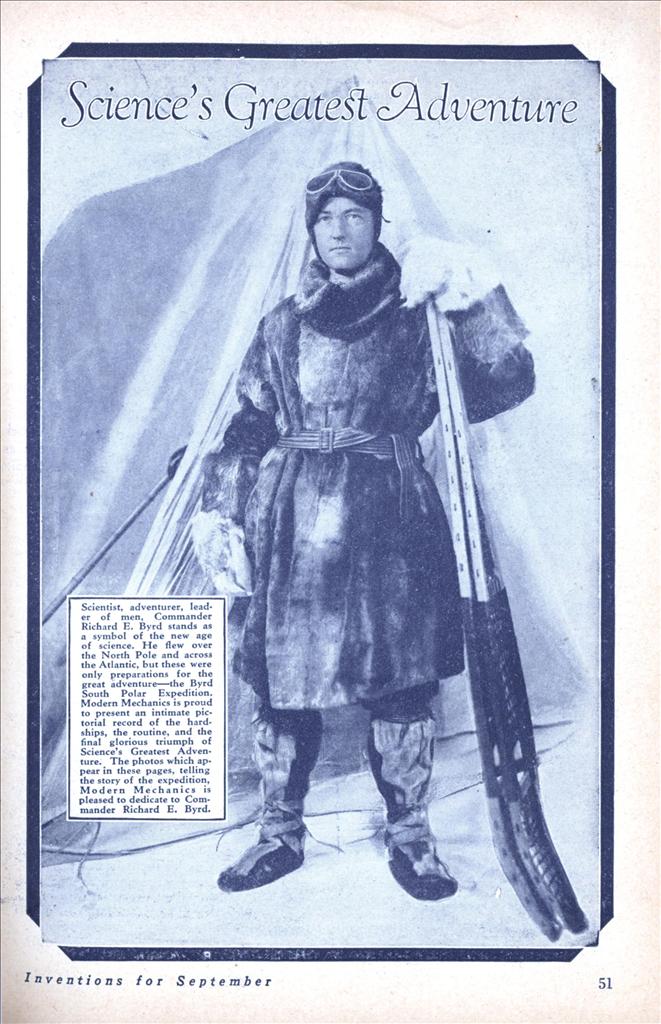 To Richard E. Byrd and his hardy companions of the South Pole Expedition, this section of Modern Mechanics is dedicated. The photos reproduced herewith tell a graphic story of the South Polar Adventure.

WITH the return of Commander Richard E. Byrd and his crew of 80 men from the Antarctic, one of the most dramatic chapters in all history is brought to a close. That the Expedition, which for 20 months ferreted out the ice-locked secrets of the South Polar lands with airplanes, dog teams, and all the instruments of modern science, was an adventure which in its various phases of hardship and discovery ranks with the achievements of Magellan, Columbus, Hudson, and other great explorers, no one will seriously deny.

Yet therein lies the danger that the drama of it all may have overshadowed the solid scientific basis on which much of the Expedition’s fame will rest. For Dick Byrd is always the scientist as well as the adventurer.

Well, you ask, just what did Byrd achieve that made the expenditure of a million dollars justifiable? If such justification were necessary—which no scientist, and certainly no adventurer, will admit—it can be pointed out that: Byrd has claimed in the name of the United States 125,000 square miles of land which he discovered. There is every possibility that there are enormous coal deposits in this land, for the Antarctic was once tropical in climate, as proved by carboniferous deposits secured by Dr. L. M. Gould, geologist of the party, from a 5000-foot mountain top.

Three mountain ranges which had never been seen before were mapped and many details added, all through the use of aerial photography. Carmen Land, reported by the Norwegian explorer Amundsen, was proved to be illusory. The Rockefeller mountain range was found to be among the oldest mountains in the world. The expedition discovered the range.

Biologically, many interesting examples of Antarctic vegetable life were brought back for study. Of course, such vegetables were of an exceedingly primitive type. In oceanography numerous soundings charted the bottom of the Polar seas for the first time. In taking these soundings a special instrument known as the sonic depth meter was used. In principle, it consists of a device which records the time necessary for sound waves to travel to the bottom of the sea and back again, knowing which it is a simple matter to chart the depth.

Ice is superimposed on land to a depth of 1500 feet, it was discovered. The volume of water locked in this immense ice cap is almost inconceivable. It has been estimated that if the Antarctic ice should suddenly melt, the released waters would add an additional two feet of depth to all the oceans of the world. Meteorological observations made will prove especially important, in the opinion of Commander Byrd, who has pointed out that more bad weather develops from the glacial planes of the Antarctic than from the Arctic Circle. Strategically located stations, therefore, would be able to predict weather conditions for Europe and America by observations taken at the birthplace of storms.

A notable fact about the expedition, and one which tells in itself a complete story of the thoroughness of Commander Byrd in equipping his expedition for all possible contingencies, is that every man in the expedition returned home in better health than when he left.