Scientific Hoaxes that Have Fooled the World (Dec, 1931) 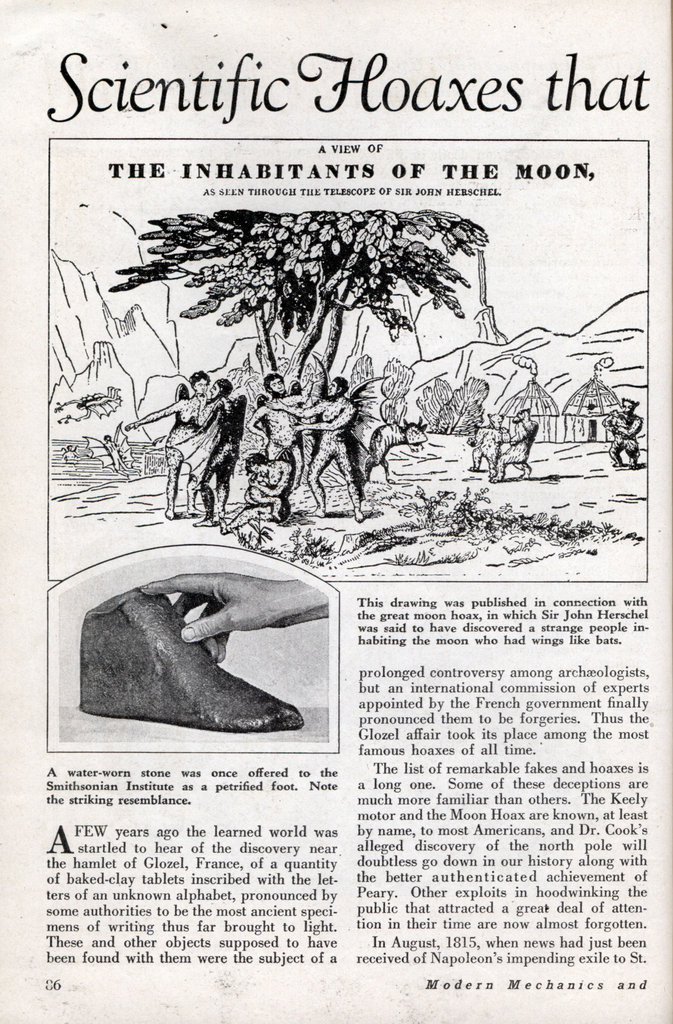 Scientific Hoaxes that Have Fooled the World

A FEW years ago the learned world was startled to hear of the discovery near the hamlet of Glozel, France, of a quantity of baked-clay tablets inscribed with the letters of an unknown alphabet, pronounced by some authorities to be the most ancient specimens of writing thus far brought to light.

These and other objects supposed to have been found with them were the subject of a prolonged controversy among archaeologists, but an international commission of experts appointed by the French government finally pronounced them to be forgeries. Thus the Glozel affair took its place among the most famous hoaxes of all time.

The list of remarkable fakes and hoaxes is a long one. Some of these deceptions are much more familiar than others. The Keely motor and the Moon Hoax are known, at least by name, to most Americans, and Dr. Cook’s alleged discovery of the north pole will doubtless go down in our history along with the better authenticated achievement of Peary. Other exploits in hoodwinking the public that attracted a great deal of attention in their time are now almost forgotten.

In August, 1815, when news had just been received of Napoleon’s impending exile to St. Helena, some wag conceived the idea of distributing handbills in the English town of Chester, stating that the island chosen for the ex-emperor’s retreat was dreadfully infested with rats, and that the government had decided to clean them out. The advertisement offered liberal prices for cats and kittens to be used for this purpose. These were to be delivered at a specified address, which turned out to be a vacant house, and to which more than three thousand felines were brought on the appointed day.

A much more sensational hoax was one perpetrated on November 9, 1874, when the New York Herald published a full-page article, under a “scare head”, describing the escape on the previous afternoon, a Sunday, of most of the wild animals in the Central Park Zoo. Hundreds of people were said to have been killed or mangled by lions, tigers, and was subsequently exhibited in several eastern cities, to the great profit of the exhibitors. It was a huge stone figure of human shape, alleged to be either a petrified man or an ancient monumental statue. Most scientists were skeptical about it and it was proved to be a fraud by Professor Marsh, of Yale University. This hoax was planned as a money-making scheme by one George Hull, of Binghamton, N. Y. The block of stone was quarried in Iowa, carved by a German mason in Chicago, stained and pitted to give it an appearance of great age, and buried at Cardiff a year before it was “discovered”.

In 1894 an alleged mummified Indian giant, supposed to have been discovered by a party of prospectors in a cave near San Diego, Calif., was exhibited in various parts of the United States, but failed to achieve the financial success of the Cardiff Giant and ended its tour in a southern pawnshop. It eventually passed into the possession of Dr. F. A. Lucas, later director of the American Museum of Natural History, who found that it was composed mainly of gunny-sacking and scrap iron.

Another money-making fraud was the Keely Motor, which, according to its promoter, J. E. W. Keely, was destined to revolutionize the mechanical arts by providing unlimited power at a very cheap rate. It was said to operate by “etheric force” but after Keely’s death in 1898 it was found to have been run by a concealed compressed air apparatus. The promoter of this scheme was backed by a large stock company, organized in 1874 to enable him to perfect the device, and he managed to deceive the stockholders for a quarter of a century.

A celebrated imposter of more recent times was Louis de Rougemont, who came into prominence in 1898. He claimed to have spent 30 years among the aborigines of Australia and he was hailed as a modern Robinson Crusoe. He lectured before the Royal Geographical Society in London, and nobody seems to have questioned his veracity until he made one fatal slip. He referred to flocks of “flying wombats”. As the wombat always sticks to terra firma, questions began to be asked, and De Rougemont was unmasked as one of the cleverest fakers in history.

In the Journal of the New York Botanical Garden for September, 1919, J. H. Barnhart published an expose of numerous fake biographies, which had, in some unexplained way, crept into an otherwise accurate and authoritative work, Appleton’s “Cyclopedia of American Biography”. These sketches of purely fictitious botanists were accompanied by lists of their equally imaginary works, of which Barnhart quotes 69 titles.

Many years ago there flourished at Reading, Pa., a self-styled weather prophet of purely local renown named Elias Hartz. One day he entered the office of the Reading Eagle, and exhibited a “goosebone”, as proof that the following winter would be a hard one. A member of the newspaper staff, Albert N. Burkholder, saw good “copy” in Hartz and his goosebone and proceeded to write him up. The initial article was followed by many more, published in New York and Philadelphia papers and reprinted all over the United States, setting forth the utterances put into the mouth of the rustic sage by his clever press agent.

Hartz, who would never have been heard of outside of his own neighborhood but for Burkholder, became a national celebrity. At the same time the superstitious notions about the goosebone, as a means of predicting weather, previously almost peculiar to the Pennsylvania Germans, became so familiar all over the United States that the word “goosebone” has become proverbialâ€”though it has not yet found its way into the dictionaries.

Encouraged by the success of this enterprise, Burkholder later invented a numerous company of weather prophets, whose predictions were supposed to be based upon the rich weather folklore current among the Teutonic inhabitants of Reading and the surrounding Berks County. These worthies were alleged to hold annual “conventions” in the autumn, when the outlook for winter weather was discussed and a vote was taken on the question of whether the season was going to be mild or severe.

Burkholder’s amusing reports of these mythical gatherings were published in leading American newspapers down to the year 1913, and were probably taken seriously by millions of people. They were finally discontinued at the request of the Weather Bureau.