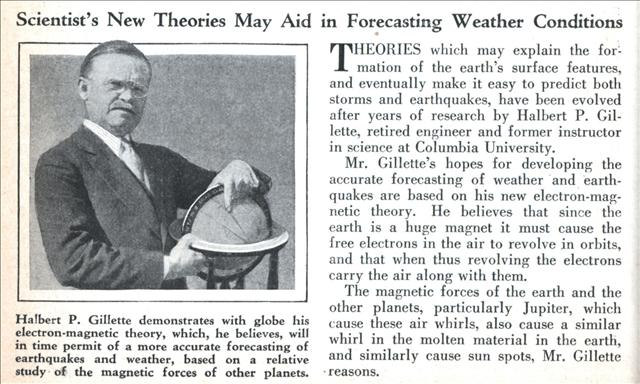 THEORIES which may explain the formation of the earth’s surface features, and eventually make it easy to predict both storms and earthquakes, have been evolved after years of research by Halbert P. Gillette, retired engineer and former instructor in science at Columbia University.

Mr. Gillette’s hopes for developing the accurate forecasting of weather and earthquakes are based on his new electron-magnetic theory. He believes that since the earth is a huge magnet it must cause the free electrons in the air to revolve in orbits, and that when thus revolving the electrons carry the air along with them.

The magnetic forces of the earth and the other planets, particularly Jupiter, which cause these air whirls, also cause a similar whirl in the molten material in the earth, and similarly cause sun spots, Mr. Gillette reasons.