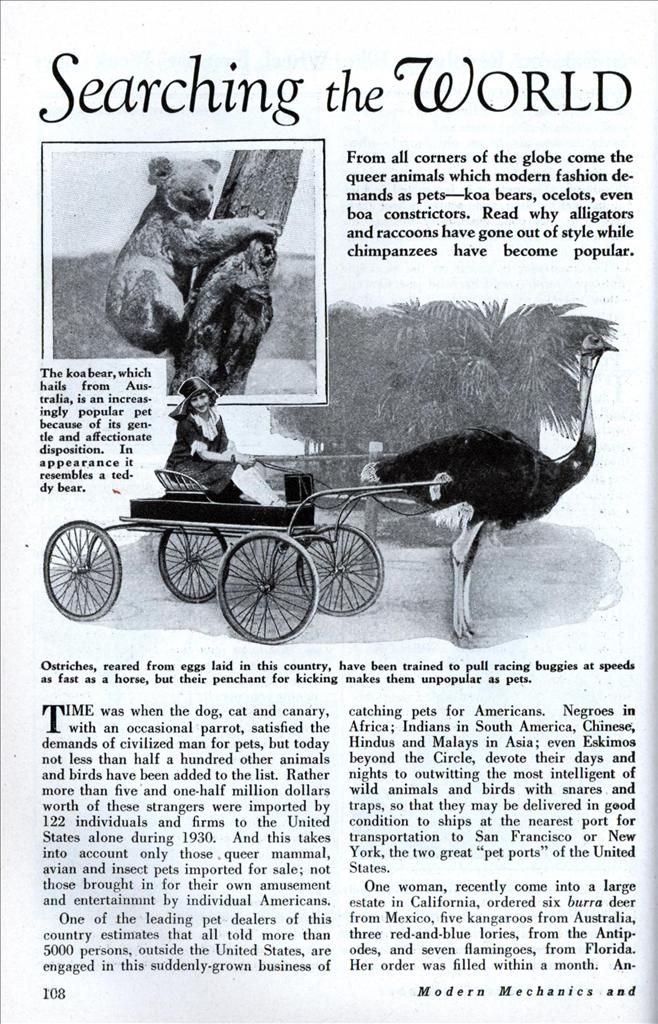 Searching the WORLD for Queer Pets

From all corners of the globe come the queer animals which modern fashion demands as pets—koa bears, ocelots, even boa constrictors. Read why alligators and raccoons have gone out of style while chimpanzees have become popular.

TIME was when the dog, cat and canary, with an occasional parrot, satisfied the demands of civilized man for pets, but today not less than half a hundred other animals and birds have been added to the list. Rather more than five and one-half million dollars worth of these strangers were imported by 122 individuals and firms to the United States alone during 1930. And this takes into account only those queer mammal, avian and insect pets imported for sale; not those brought in for their own amusement and entertainmnt by individual Americans.

One of the leading pet dealers of this country estimates that all told more than 5000 persons, outside the United States, are engaged in this suddenly-grown business of catching pets for Americans. Negroes in Africa; Indians in South America, Chinese, Hindus and Malays in Asia; even Eskimos beyond the Circle, devote their days and nights to outwitting the most intelligent of wild animals and birds with snares and traps, so that they may be delivered in good condition to ships at the nearest port for transportation to San Francisco or New York, the two great “pet ports” of the United States.

One woman, recently come into a large estate in California, ordered six burra deer from Mexico, five kangaroos from Australia, three red-and-blue lories, from the Antipodes, and seven flamingoes, from Florida. Her order was filled within a month. An- other wanted a pair of macaws—large, multicolored parrots—each of which spoke English, Spanish and French. She got them in six months and they cost her $1,000 each. A man who owns a large fenced acreage of eastern Oregon mountains, sought and obtained—for $20,000—seven snow-white, black-horned mountain goats from the snow-covered ranges of Alaska, so far “domesticated” that they could be approached without stampeding.

This man, C. J, Ullom, prowls the mountains of the West in the spring, seeking the dens of wild cats. From these he takes the kittens, or cubs, rears them on milk fed through an ordinary nursing bottle, and literally lives among the savage little animals until they have become well accustomed to man’s presence, and to look upon him as the source of their food and comfort. He has found it impossible to tame or train a wild cat if it is caught at an age of more than two months.

Rearing Lion Cubs as a Business Along similar lines, F. V. Hogue, of Texas, rears mountain lion cubs to adult size with the aid of bottles of milk and gentle hands. In addition to his lions, which may be led about with collars and leashes, like dogs, Hogue has produced on demand several jaguars, the leopard-like animals of Mexico and Central and South America.

Possibly the most unusual order ever received by a pet-hunter is for a white elephant, one of the albino pachyderms so valued in Siam and Indochina. This came from an actress in Hollywood, and has not yet been filled, though Joe Fields, of Bangkok, has written his San Francisco correspondent that the animal will be on its way to the pavements of Hollywood this summer. Aside from elephants, the largest pel on record is a 5,000 pound elephant seal, more commonly known as sea elephant, which, with three others, all smaller, was brought to the San Diego zoological garden. This huge bull, twice the size of any one of his companions, became tractable almost at once, taking his daily fifteen pounds of fish from the keeper’s hand, and permitting the latter to scratch his head and even to get on his back as the two and one-half ton animal lay on the sand pile near the tank. Snakes have come into great vogue as pets, all the way from the two-foot king snakes and the five-foot gopher snakes, to great sixteen to twenty-foot boas and pythons only slightly smaller. There is a man in Los Angeles who will supply you with a “domesticated snake” on telephone call, of any variety or size you may desire. With each snake he will send instructions as to whether the reptile is-to be fed on live white mice and rats, or dead hamburger.

Snakes Are Popular Pets He has venomous snakes, too, for sale to laboratories and zoological gardens, but his largest trade is the sale of “tame” non-venomous reptiles for pets. He keeps a stock of 75 to 100 large, harmless snakes on hand all the time, and makes at least one trip a year into the tropics to bring out boas and pythons. The boas are in greatest demand as pets, and bring from $100 to $300 each, depending on size and “smartness”, which, in snake-collector terminology, means liveliness and activity. Some of his boas are sixteen to eighteen feet long and weigh in the neighborhood of 100 pounds, yet their fair and proud owners—for women most frequently choose snakes for pets—will wear them draped around necks and waists.

“Snakes are just like men and women, some have good dispositions and some bad,” says Paxson C. Hayes, the snake-pet man. “But most of the non-poisonous varieties are dependable and intelligent. They are tame from the time they are picked up, and may be made good pets at any age.”

Hayes catches his non-poisonous snakes with his bare hands, though one twenty-foot boa cracked three ribs for him with one lightning loop around his body, down in Mexico. That boa is now the pride of the Hayes snake farm. Three men were required to subdue this 110-pound reptile and bring him back to become some American girl’s pet Few birds are more wild and wary than the herons and similar marsh-loving waders. Yet on Avery Island, in Louisiana, Edward A. Mcllhenny has made friends with hundreds of pairs of them, even to the rare white egret of the beautiful plumes, once so valued for decorations on women’s hats. More than this, he has saved these egrets from extinction, at the hands of the plume hunters. They make their nests and rear their broods in the trees around the Mcllhenny plantation, and are so tame that the visitor may make all the “close-ups” he desires with any small hand camera.

There are fashions in pets, just as there are in gowns and jewelry. Alligators, for example, which five years ago were in wide demand as yard companions for those who wanted the latest, are now almost out of the picture, though there are alligator farms from Los Angeles to Palm Beach, wherever the saurians thrive. Young lions, and even tigers and leopards, no longer find the market they did five years ago. Today, a chimpanzee which can eat with knife and fork, and walk down the street hand-in-hand with its owner, is worth as much as two lions or tigers. The smaller and less-intelligent monkeys, except the delicate little marmosets, can be bought for less than half their cost ten years ago.

Brown and black bears, and especially the tiny gray Koa bears, with their tree-climbing abilities and their gentle dispositions, are in demand, with prospects of a stiffening market, so if you want a good-natured pet, yet one which may startle your friends, invest in a bear. Bears are bottle-reared, also, like little mountain lions and wild cats. Many a full-grown wild bear in the Yosemite Valley owes its life to the ability of a forest ranger to find canned milk and a nursing bottle, for the adult bears will wander from the protection of the park, and, meeting some hunter, fail to return to their cubs.

The United States Marines are noted for “having been everywhere and done everything,” but one of them started a new fad in pets by bringing out of the Nicaraguan jungles a tame ocelot. Now, an ocelot is a wild cat, about twice as large as a well-grown house-cat. It is spotted like its larger relative, the jaguar, except that it has even more beautiful markings. It is unlike the wild cat of the United States in that the ocelot has a long tail, and lacks the tiny tufts of hair on the tips of the ears which mark the lynx. Ever since the days of the Maya and Aztec empires, ten to twenty centuries ago, these little spotted cats have been domesticated for the peoples of southern Mexico, Central America and South America.

When the Marine brought his ocelot to the United States, it had become so tame that it could be released, like a domestic cat, around the house and yard, even following its master down the street and through his home town like a well-trained dog. Contrary to the usual habit of the cat tribe, this ocelot loved water. The sound of a running hose or a hissing lawn-sprinkler would send it leaping to play in the spray. The combination of Marine and long-tailed, spotted, gold and black wild cat conquered the pet owners who saw them, and the demand for ocelots is far beyond the supply.

Coyotes Are Untamable Even wolves have been tamed and trained as pets, but their smaller relative, the coyote of the western plains, remains an Ishmaelite among the four-feet. Occasionally, a Coco-pah, a Yuma, a Chimahuevi, or a member of some other western tribe of Indians will tame a coyote, but so far as the writer knows, no white person ever has made a pet of one of these swift-footed, sharp-toothed little marauders, though they are still common in many of the western states.

Of all the pets, fish are the most difficult to maintain. Bert Day, who spends most of his time cruising around the Philippines and the Hawaiian Islands in search of gorgeously-colored and curiously-shaped fish for public and private aquariums, tells me that nearly 40 per cent of the catches, no matter how carefully made, is lost before the fish can be delivered to the tanks wherein they are to add to the enjoyment and education of man. The Japanese early realized the obstacles to this form of pet-hunting, and established goldfish “farms”, where more than one thousand varieties are produced under the same conditions they will encounter when distributed to their future owners. This goldfish farming is an extensive pet-producing industry, worth, it is estimated, more than half a million dollars annually to the goldfish farmers of California alone.

Birds as pets range from ostriches which have been trained to pull light buggies at speeds almost equal to that of a good horse, to tiny multi-colored finches from Asia, and form what is known as the “main stock” of the dealer. Golden eagles have been taken from California to England, in a revival of the ancient sport of falconry, and were so successful that trials were made with duck-hawks, pigeon-hawks, sparrow-hawks and even the rough-legged hawk in this country. All these birds were tamed to a degree and taught to return to the leather-covered hand of their owner at his whistled call. None of them ever equaled the great peregrine falcon used for hawking in the days of chivalry, though the golden eagles still are popular among British sportsmen.

Out of this industry of providing queer pets from all the countries of the world has grown another—that of collecting and preparing suitable foods for all of them. From selected, dried and medicated hay for elephants white mice and rats for snakes to condensed diets for chimpanzees and shredded shrimp for rainbow-fish, the pet owner now can buy everything for his queer companions except water. Booklets, based on the climate in which the pet-owner lives, instruct him in the housing and general care of mammals, birds,.and reptiles, while a Japanese in San Francisco is endeavoring to introduce the singing and fighting crickets of Nippon as pets in the United States.