This article is supposedly about German secret weapons, but really is a propaganda piece expounding on the superiority of American arms and engineering. My favorite quote is: “So far the Germans haven’t come through with anything approaching the new British-American jet-driven plane, which is already in production.”

As far as I know the Germans already had Me-262‘s in the field at this point. The the only American jet to be deployed in the war was the P-80 and by the end of hostilities in Europe, a grand total of 4 had made it to Europe. 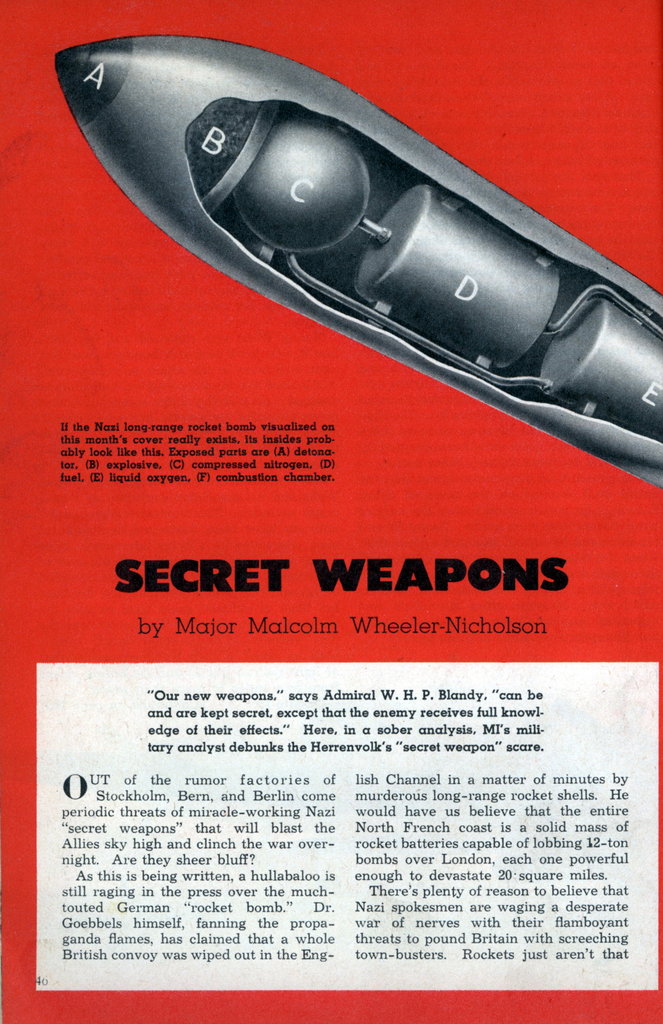 “Our new weapons,” says Admiral W. H. P. Blandy, “can be and are kept secret, except that the enemy receives hill knowledge of their effects.” Here, in a sober analysis. Mi’s military analyst debunks the Herrenvolk’s “secret weapon” scare.

OUT of the rumor factories of Stockholm, Bern, and Berlin come periodic threats of miracle-working Nazi “secret weapons” that will blast the Allies sky high and clinch the war overnight. Are they sheer bluff?

As this is being written, a hullabaloo is still raging in the press over the much-touted German “rocket bomb.” Dr. Goebbels himself, fanning the propaganda flames, has claimed that a whole British convoy was wiped out in the English Channel in a matter of minutes by murderous long-range rocket shells. He would have us believe that the entire North French coast is a solid mass of rocket batteries capable of lobbing 12-ton bombs over London, each one powerful enough to devastate 20 square miles.

There’s plenty of reason to believe that Nazi spokesmen are waging a desperate war of nerves with their flamboyant threats to pound Britain with screeching town-busters. Rockets just aren’t that good. For one thing, they’re far less accurate than missiles from rifles or even smoothbore guns. What’s more, they would have to carry so much fuel on long-distance flights that their explosive load wouldn’t be greater than that of an Allied blockbuster. The Germans may very well have some surprise up their sleeves. But the high-powered rocket scare certainly means that Hitler’s General Staff has abandoned all hope of renewing its aerial blitz or landing troops on Dover Beach.

As against scare headlines, Allied military experts can set up some reassuring facts.

Previous German efforts to profit by secret devices of warfare usually proved to be dismal duds. In addition there is the undeniable circumstance that secret weapons sometimes influence local decisions but never win wars. From the burning glasses of Archimedes, which set fire to Roman galleys in ancient Sicily, to the Nazi acoustic torpedos which attempt to track down not-so-helpless Allied merchantmen in the Atlantic, secret weapons have been tactical and local in their effect rather than strategic and general. Further, the combined Allied scientific staffs, in number and ability of scientists and amount of research facilities, outweigh by far their German equivalents. The best of the German scientists have been exiled or sent to concentration camps. And Allied, especially American, production facilities are so flexible and can so quickly be geared up for the mass production of counter weapons, that any new enemy weapon would have shortlived success. We’ve heard this kind of extravagant talk before. There seems to be some enormous blind spot in the square Teutonic head that makes Jerry a sucker for war predictions partaking of fantasy. The German wants fervently to believe that some mechanical miracle will turn up momentarily to retrieve his strategical and psychological errors.

In the last war, the Germans let loose with U-boat wolf packs, poison gas, Big Berthas to shell Paris. But they still lost the war. One Allied “secret weapon”â€”the tank, which ploughed down barbed wire entanglements, trenches, and machine gun nestsâ€”did more damage than all the German tricks put together. “It was not the genius of Marshal Foch that defeated us,” wrote German General von Zwehl in 1921, “but that of General Tank.”

It is worth remembering that Allied scientists are not exactly idle in this war. We may not do as much lung work as Goebbels and his cohorts, but our laboratories are working overtime, and we’ve already sprung a few surprises in the ordnance field that set the Germans back on their heels. Vice Admiral Thomas Curteis, senior officer of the British Navy in the Western Atlantic, said recently that “The Germans may have something very violent up their sleeves but I think I can safely say that whatever they produce, it won’t make the slightest difference to the war: we’ll get over it.” In short: our scientists have enough know-how to cope with any emergency.

Admiral Ingram C. Sowell of the U. S. Navy, speaking in the same vein, announced not long ago that “Secret Allied weapons have been responsible for our lop-sided victory over the Japanese in the Pacific.” Among the “ordnance sensations” disclosed by him and other military spokesmen in answer to Nazi threats were: tremendous improvements in fire control on certain types of guns, making it necessary only to sight on a moving target to get perfect aim through mechanical computations; a device for jumping the top speed of fighter planes by pumping water directly into their engine cylinders along with gasoline. And now the Allies have their “piat projector,” a one-man tank-buster whose vicious projectile will blast through four inches of the finest armor plate.

“Our new weapons,” says Admiral W. H. P. Blandy, “can be and are kept secret, except that the enemy receives full knowledge of their effects.”

The list of Allied secret weapons in this war â€”just those few that have so far come to light â€”puts to shame everything the Germans have been able to offer. The first surprise that Hitler sprang was not a mechanical contrivance but startling innovations in tactical formationsâ€”the tank-airplane team and lightning panzer divisions being the most notable. After reeling under initial blows, the Allies came back by developing strategical air power, outstripping Luftwaffe leaders who conceived of aviation only in the role of ground-troop support. Today the Allies dominate the skies, however stiff the opposition.

The Germans made much of their triple-purpose 88 mm. gun, which could be used for either anti-aircraft, anti-tank, or field artillery fire. Having smashed the “impregnable” Maginot Line with this effective weapon, whose projectile can pierce nearly three inches of armor at a distance of two miles, they turned it loose on the British Eighth Army in Africa, driving Montgomery back almost to Egypt. But the far superior, more mobile American 90 mm. smashed Rommel’s 88’s and drove him from El Alamein into the Tunisian sea. The Guerlich tapered-bore, high velocity, anti-tank gun proved no more decisive, since the Allies adopted counter measures long before there were enough of these guns in the field to count.

The Germans have no anti-tank weapon to match our bazookaâ€”the absurdly simple one-man rocket gun that enables our soldiers to hold their ground against any enemy tank. The bazooka has already seen action with invasion troops, knocking out beach pillboxes and blowing up barbed wire obstacles. The German tanks, which spearheaded the attacks of their crack panzer divisions, were good. But, after some initial fumbling, Allied assembly lines poured forth a mounting stream of General Shermans, Priests, and a whole variety of self-propelled guns that have no peers anywhere. We have the Sperry gun sightâ€”a mechanical brain which does rapid-fire calculations and points a plane’s machine gun with vicious accuracy at moving targets. Today these electric precision sights are placed in Vickers electro-hydraulic power turrets which control a gun’s tendency to align itself with the windstream.

The Germans have nothing as good in the way of aerial armament controls. And only the Allies have the gyro flux gate compassâ€”the second new compass in more than 4,500 years, a direction indicator, controlled by the earth’s magnetic field, which never oscillates, lags, or overshoots and gives automatically corrected readings.

The U. S. Army has learned how to hoist a 75 mm. cannon into the skies in the lethal nose of a B-25â€”a plane weapon so potent that it already has sunk a Japanese destroyer singlehanded. A special mechanism renders quite harmless the cannon’s kickback, which would ordinarily tear a plane to bits. German scientists have labelled this whole development impossible.

So far the Germans haven’t come through with anything approaching the new British-American jet-driven plane, which is already in production. They can’t duplicate the gyroscopic mounts for our tank guns, which permit greatly improved firing accuracy during travel over the roughest terrain. Their turbosuperchargers, which permit fighting planes to soar into the thin air of the stratosphere with undiminished power, don’t measure up to ours.

What, actually, have the Germans produced in the way of secret weapons, besides sensational rumors? There was the “iron crab,” a movable, two-man, ventilated, steel pillbox containing machine guns and range finders, which can’t stand up under our bazooka and heavy artillery fire. There was the anti-tank torpedo, a kind of small tank operated by remote control which the Russians squashed by cutting its control cables. There were the teller anti-tank mines and “bouncing betty” anti-personnel mines, which no longer take a significant toll now that the Allies have well-trained sapper units to smell them out.

The Germans gave a big play to their aerial rocket guns mounted on fighter planes, which were to sweep the skies clean of Allied craft. These were effective weapons against the American bomber attack on Schweinfurt, costing us 60 ships, but they have already been countered. Similarly, the German magnetic mine caused considerable damage to our shipping until the degaussing belt, perfected on the double, rendered it harmless.

Today the Berlin rumor experts are talking big about the “bumblebee” gun, supposedly a sort of “super-surface torpedo” releaser whose projectiles hum over the water like giant bees. This is evidently a weapon devised to damage sea-born invasion forces. The German press claims that this and other types of rocket missiles have tremendous penetrating force, and are loaded with a new explosive of unequaled destructive power.

At this moment we have no way of separating fact from fiction in all these reports. But we would do well to recall that our own scientists are not exactly slouches when it comes to rocket warfare. The Russians demoralized German troops and sent them into precipitate flight from Stalingrad with dense rocket salvos; Russian Stormovik ground fighter planes accelerate their bombs with rockets; and we have the now famous bazooka. We can rest assured that our experts will be able to duplicate whatever the Germans produce, and go them one better.

In 1942 one of General Electric’s factories received from the Army’s Ordnance Department a handmade model of the bazooka gun. Within 30 days several thousand bazookas had been delivered to the armed forces.

There is the Allied answer to any secret weapon Hitler can dream up.