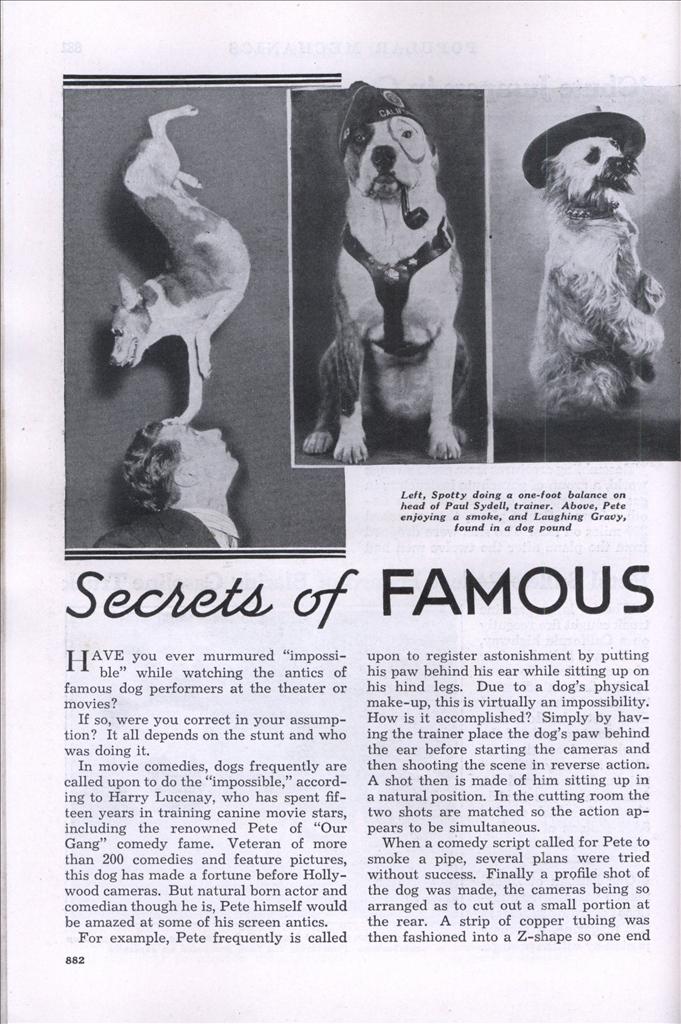 HAVE you ever murmured “impossible” while watching the antics of famous dog performers at the theater or movies?

If so, were you correct in your assumption? It all depends on the stunt and who was doing it.

In movie comedies, dogs frequently are called upon to do the “impossible,” according to Harry Lucenay, who has spent fifteen years in training canine movie stars, including the renowned Pete of “Our Gang” comedy fame. Veteran of more than 200 comedies and feature pictures, this dog has made a fortune before Hollywood cameras. But natural born actor and comedian though he is, Pete himself would be amazed at some of his screen antics.

For example, Pete frequently is called upon to register astonishment by putting his paw behind his ear while sitting up on his hind legs. Due to a dog’s physical make-up, this is virtually an impossibility. How is it accomplished? Simply by having the trainer place the dog’s paw behind the ear before starting the cameras and then shooting the scene in reverse action. A shot then is made of him sitting up in a natural position. In the cutting room the two shots are matched so the action appears to be simultaneous.

When a comedy script called for Pete to smoke a pipe, several plans were tried without success. Finally a profile shot of the dog was made, the cameras being so arranged as to cut out a small portion at the rear. A strip of copper tubing was then fashioned into a Z-shape so one end could be placed between the dog’s teeth, and the other on the outside of his jaw on the side hidden from the camera. To this end was attached a rubber hose that ran along the hidden side to the trainer beyond the camera lines. A pipe was then placed in the dog’s mouth and his trainer, blowing smoke through the tube, supplied realistic puffs. Inasmuch as the rear of the dog was not in camera range, the rubber hose could not be seen.

In another comedy, a young married woman, while making a cake, accidentally put a pan of chicken feathers into the ingredients. The laugh came when Pete was given a piece of cake and started spitting out the feathers. Lucenay experienced little difficulty in getting this effect. After the preliminary shots of the dog munching on cake were taken, the trainer rolled up some feathers in a compact ball and placed them in Pete’s mouth. Cameras started grinding and Pete was told to bark. When he did, the feathers shot out of his mouth.

In another picture, a college weakling became the campus hero when, while being chased by a dog, he succeeded in winning a cross-country race. Here the problem was in keeping the dog at varying distance behind the runner. When the athlete showed signs of slowing up, Pete was to move up within biting distance. Attaching a long piece of piano wire to the dog’s collar so he could govern the dog’s speed from the rear without detection, Lucenay placed Pete’s play ball in the runner’s back pocket. When the actor started to run, the dog was after him to get the ball.

The methods he has used in training movie dogs can be used successfully in the education of house pets, Lucenay says. A dog to be trained must have love and confidence in his master, he warns. Too, he must be taught to respond immediately to commands.

“The reason many dog owners fail at training,” he explains, “is because they lack patience. They attempt to teach everything in a few weeks, when actually, months, and even years, are required to do the job properly.”

The early stages of training should be masked as play, says the Hollywood trainer. Thus, knowledge is instilled without making it a hardship. A hard rubber ball is the best pencil and slate for the canine kindergarten. If the puppy fails to register enthusiasm when the ball first is rolled, tie a string to the ball and draw it along in front of him. After he has been allowed to catch the ball a few times, he will be enthusiastic.

After a time, a newspaper rolled up and tied with a string should be substituted. This in turn can be supplanted by an old basket, or something else light and bulky. By degrees the weight can be increased. Then, holding the puppy by the collar, the object should be thrown and the dog commanded to retrieve it. “If the pup brings the object back,” says Luce-nay, “he should be petted and praised. Walk several steps before removing the object from the dog’s mouth. If he doesn’t bring it back, roll it around in front of him until he picks it up. When he has mastered this stunt, he is ready to carry a parcel or bring in the evening paper in addition to retrieving.”

To teach a pup to sit down, says Lucenay, place your left hand under his lower jaw and gently press his haunches downward at the same time telling him to “Sit down.” To teach him to come when called, a light cord several yards long should be fastened to his collar. After placing him in a sitting position walk away and then give the command, “Come here.” If he disregards the order, a gentle tug will serve as a reminder. When the gentle tug fails, pull the dog slowly toward you, making certain to encourage and pet him when he is within reach.

To teach a pup to lie down in an indicated spot and stay there, Pete’s master gives these suggestions: “Call the pup by name, point to the spot where you wish him to lie, and then in low, even voice tell him to ‘Lie down.’ Naturally, at first, he won’t understand, so after telling him to sit down, pull his front paws slowly forward until he is on his stomach. Place his head on his paws and hold it there for a short time. Loosen your hold and, if he attempts to get up, place him in the original position with the order ‘Stay there.’ Repeat this several times daily for a week or so. At the outset, it’s a good idea to stand over him for a short time to see that he obeys. Then start to walk away and if the dog gets up to follow, place him in the original position with the order, ‘Stay there.’ “Get farther and farther away, walking around him in one direction and then in the other. Then go to another room where the pup can’t see you, but you can watch him. If he starts to get up, command him to ‘Lie down.’ Never allow him to get up until you give him the command, ‘Come on.’ With a good foundation in these points, the dog can be taught many simple tricks.”

It is not hard to train a dog to jump through a hoop or over a stick, Lucenay says. He should be started with a piece of board held edgewise on the ground because if he is used to a stick, he may try to crawl under it. By lifting one paw gently and then the other, a pup can be taught to shake hands. At the same time repeat “Right hand” and “Left hand,” always taking the one demanded and refusing the other. Your hand should be extended to the side of the paw asked for so the other paw cannot reach it.

Another trainer who believes in starting to train puppies early is Paul Sydell, owner of Spotty and Kiki, two of the greatest dog performers in the world. Not long ago, Sydell introduced another member into his troupe. Her name is Roberta and she was just four days old. At her debut, the little pup stood perfectly balanced on its two front feet in the center of the trainer’s hand!

All dogs are not cut out for performers, Sydell says. Many with the ability to perform don’t care about it and are as useless as those that cannot be taught.

“I’ve spent weeks trying to teach some dogs a trick that a natural born performer can pick up in a few minutes,” he says. “If you find a dog is a show-off it’s a pretty safe bet he has good possibilities.”