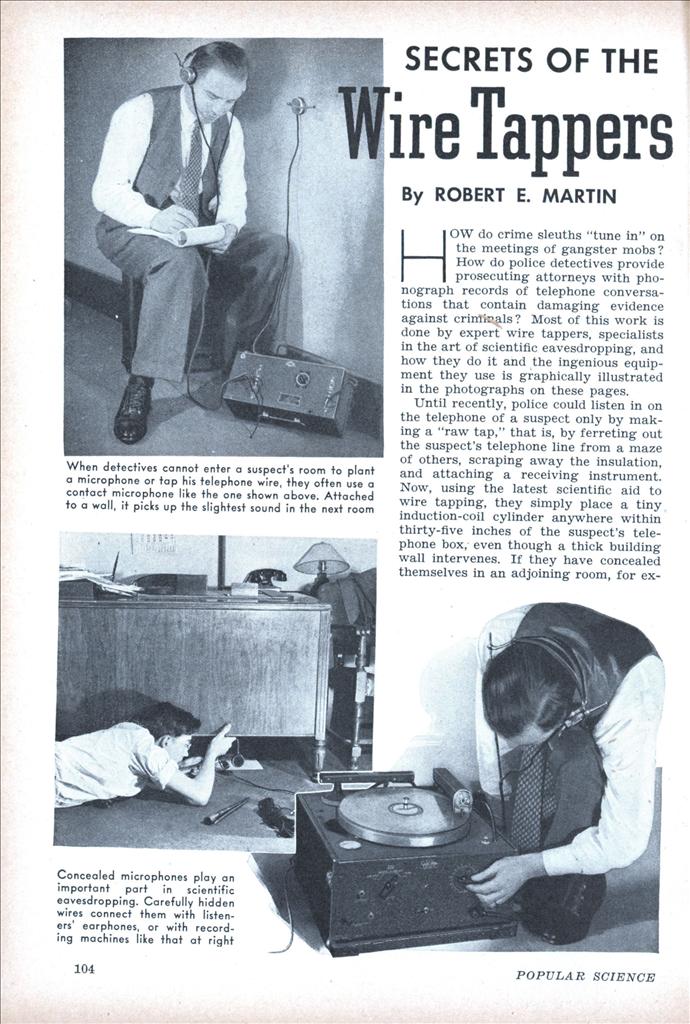 SECRETS OF THE Wire Tappers

HOW do crime sleuths “tune in” on the meetings of gangster mobs? How do police detectives provide prosecuting attorneys with phonograph records of telephone conversations that contain damaging evidence against criminals? Most of this work is done by expert wire tappers, specialists in the art of scientific eavesdropping, and how they do it and the ingenious equipment they use is graphically illustrated in the photographs on these pages.

Until recently, police could listen in on the telephone of a suspect only by making a “raw tap,” that is, by ferreting out the suspect’s telephone line from a maze of others, scraping away the insulation, and attaching a receiving instrument. Now, using the latest scientific aid to wire tapping, they simply place a tiny induction-coil cylinder anywhere within thirty-five inches of the suspect’s telephone box, even though a thick building wall intervenes. If they have concealed themselves in an adjoining room, for ex- ample, they hold this phantom wire tapper against the opposite side of the wall to which the suspect’s box is attached. Or, if the phone is near an outside wall, they carefully lower the coil along the exterior of the building from the roof or from an upper room. Electrical impulses radiating from the telephone box are picked up by the coil, wired to a powerful amplifying unit, and reproduced either through a loudspeaker or through headphones.

Occasionally, direct electrical contact with a criminal’s telephone wire is necessary. Detectives now use a pair of specially designed clips fitted with sharp metal needles that penetrate the insulation and contact the copper wire, but leave no telltale marks when removed. Telephone tapping, however, is not the only stratagem in the eavesdroppers’ bag of tricks. When detectives can slip into a suspect’s room while he is absent, they plant a tiny, supersensitive microphone under a desk, behind a curtain, or even within the earpiece of his telephone. With the latter arrangement, the concealed wire carries two-way telephone conversations, as well as sounds made in the room, to police.

If it is impossible to plant a “mike,” wire-tapping experts still have an ace-in-the-hole in an ingenious contact microphone which can be attached to the wall between the suspect’s and an adjacent room. Through any wall of ordinary thickness, the contact mike will pick up the slightest sound.

Evidence gained by any of these forms of electrical sleuthing are preserved in permanent form by the use of a portable sound recorder. Records of the damaging evidence can then be played back in court to help convict the unsuspecting criminal.