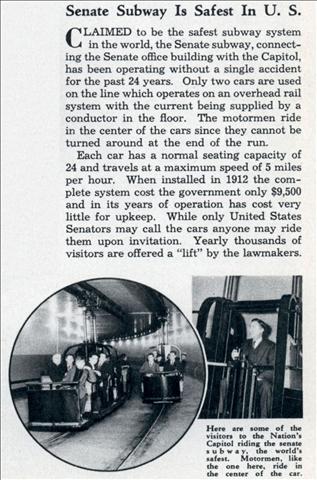 Senate Subway Is Safest In U. S.

CLAIMED to be the safest subway system in the world, the Senate subway, connecting the Senate office building with the Capitol, has been operating without a single accident for the past 24 years. Only two cars are used on the line which operates on an overhead rail system with the current being supplied by a conductor in the floor. The motormen ride in the center of the cars since they cannot be turned around at the end of the run.

Each car has a normal seating capacity of 24 and travels at a maximum speed of 5 miles per hour. When installed in 1912 the complete system cost the government only $9,500 and in its years of operation has cost very little for upkeep. While only United States Senators may call the cars anyone may ride them upon invitation. Yearly thousands of visitors are offered a “lift” by the lawmakers.