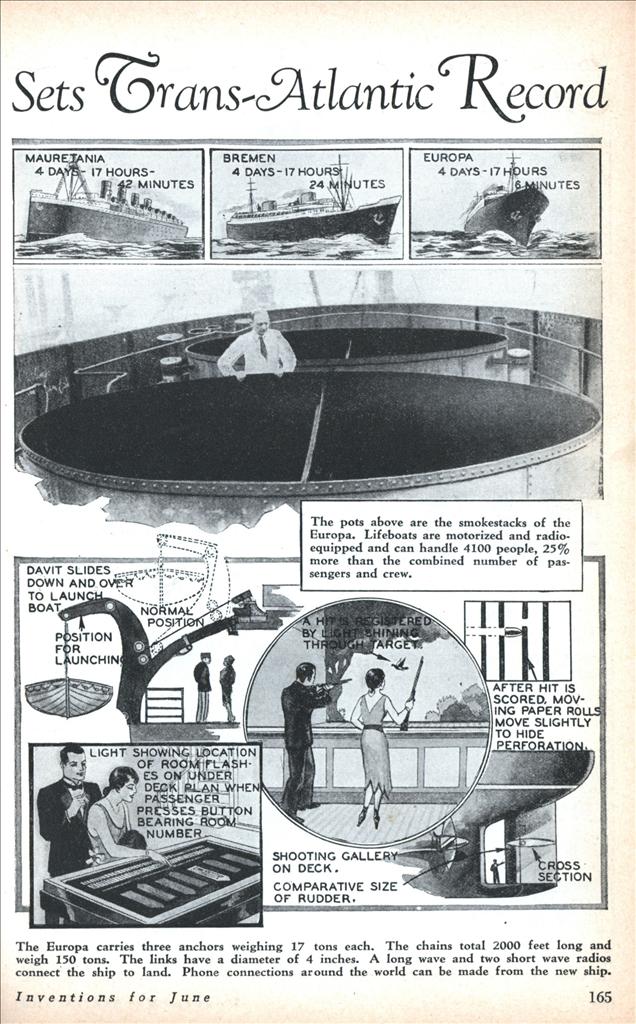 Europa’s Maiden Crossing WHEN the giant North German Lloyd liner S.S. Europa steamed past Ambrose Light in New York Harbor a new record for speedy trans-Atlantic crossings was established. The Europa cut 18 minutes from the mark of 4 days, 17 hours and 24 minutes set by her sister ship, the Bremen, last October.

The Europa, like the Bremen, has the bulbous bow, a device which creates “dead water” at the propellers, giving to them a push which they could not get if the water were rushing by. Her exterior appearance, except for minor details, is identical with that of her sister ship. Her engines are high pressure steam turbines, the latest development in construction of high-speed vessels.

An unusual feature is her name in electric lights on starboard and port sides amidships. The letters are 6 feet high, illuminated by 1,200 bulbs which flash alternately. Flags also can be illuminated.

There are seven compartments for boiler and engine plants. The auxiliary machinery as well as generators and dynamos are located aft the main engine room. The main plant consists of two sets of turbines forward and two aft, each set, consisting of high, intermediate and low pressure turbines, being connected with one of the screws through single reduction gears which reduce the turbine speed of 2,100 r.p.m, to 210 r.p.m, of the propellers. The turbines are completely insulated against loss of teeth.