Modern Mechanix
Issue: Jan, 1929
Posted in: Nautical, Sign of the Times
No Comments on Shackleton the Pioneer (Jan, 1929) 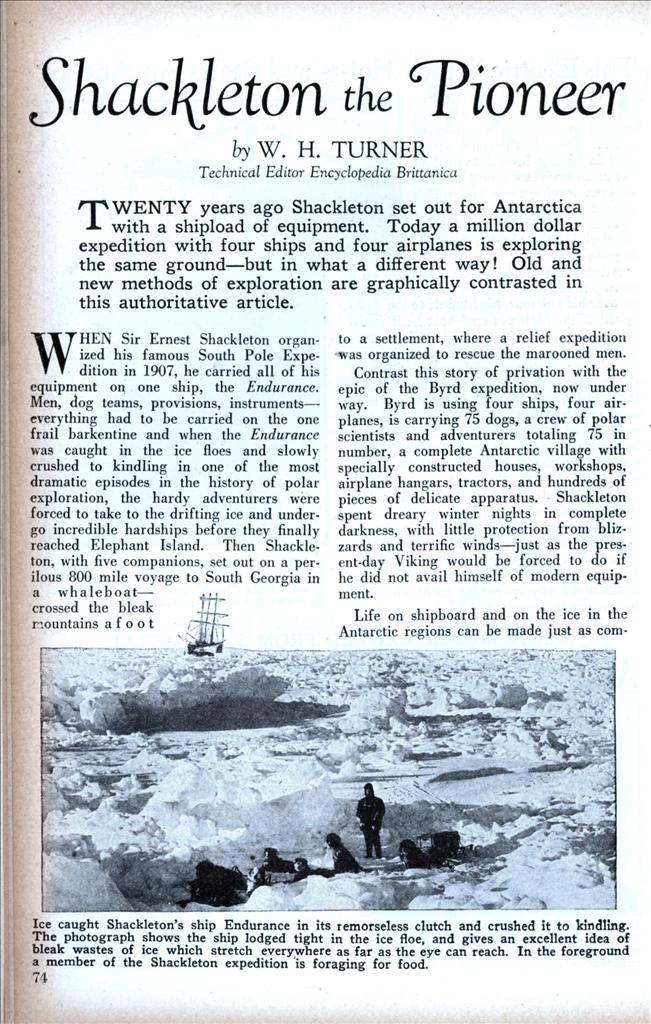 TWENTY years ago Shackleton set out for Antarctica with a shipload of equipment. Today a million dollar expedition with four ships and four airplanes is exploring the same ground—but in what a different way! Old and new methods of exploration are graphically contrasted in this authoritative article.

WHEN Sir Ernest Shackleton organized his famous South Pole Expedition in 1907, he carried all of his equipment on one ship, the Endurance. Men, dog teams, provisions, instruments— everything had to be carried on the one frail barkentine and when the Endurance was caught in the ice floes and slowly crushed to kindling in one of the most dramatic episodes in the history of polar exploration, the hardy adventurers were forced to take to the drifting ice and undergo incredible hardships before they finally reached Elephant Island. Then Shackleton, with five companions, set out on a perilous 800 mile voyage to South Georgia in a whaleboat— crossed the bleak mountains afoot to a settlement, where a relief expedition was organized to rescue the marooned men.

Contrast this story of privation with the epic of the Byrd expedition, now under way. Byrd is using four ships, four airplanes, is carrying 75 dogs, a crew of polar scientists and adventurers totaling 75 in number, a complete Antarctic village with specially constructed houses, workshops, airplane hangars, tractors, and hundreds of pieces of delicate apparatus. Shackleton spent dreary winter nights in complete darkness, with little protection from blizzards and terrific winds—just as the present-day Viking would be forced to do if he did not avail himself of modern equipment.

Life on shipboard and on the ice in the Antarctic regions can be made just as comfortable as if civilization were just around the corner, rather than thousands of miles away.

To understand the sheer daring of those steel hearted pioneers who first staked their all in reaching the South Pole, it must be realized that the Antarctic continent is as large as the United States and Canada combined.

Imagine Canada and the United States covered with ice and snow. A thousand miles in the uninhabited interior, near Chicago, lies a place called the South Pole. A few men—with Scott and Amundsen—have walked and struggled on foot through blizzards and gales, often falling into crevasses, from this New York to Chicago. But to say that these men walked this distance with sledges is not enough. This mythical Chicago lies on a plateau nearly 10,000 feet high.

Toiling up mountains, from the sides of which creep the mightiest glaciers on earth, was an additional undertaking calling for tremendous exertion. Further imagine Canada and the United States surrounded by a belt of impenetrable ice. Very little of the coast line is known. New York harbor has been discovered and a few islands off the coast on all sides. This, in a measure, represents the circumstances that the Antarctic pioneer must prepare to face.

Heretofore there have been three chief means of locomotion for the exploration of the polar regions: Sailing in a ship, sledge traveling with or without dogs, and drift with the ice. The use of the first method is limited by the impenetrable ice preventing the movement of the ship.

Today we have acquired two new and important means of locomotion—the aeroplane and the dirigible. Not only have they become a necessity for exploration, but they are the best means of clearing the mystery that surrounds the frozen continent, Huge ice cakes, sometimes twenty feet high, make foot travel extremely difficult, but do not bother airplanes.

The Antarctic village to be set up by Byrd will be the largest settlement ever raised in an expedition in the southern seas. It will consist of five main buildings and a number of provision caches and instrument houses.

Beams supporting the building and tying it together are held by bolts which do not go to the outside, so that they will not transmit cold.

The largest and most important building will be the executive headquarters, which will house the radio apparatus, the scientists, the doctor’s quarters, Commander Byrd’s own quarters and an office. In a part of this room will be complete photographic apparatus so that pictures taken during flights can be immediately developed as an aid to mapping the country traversed. In another wing will be the radio rooms, where the short and long wave apparatus and the direction finder for use in keeping track of the plane during flights will be installed.

Joining the executive building is to be the mess hall and kitchen. It will contain a piano, and this hall will probably be used to show motion pictures of the expedition long before they are shown in America.

Four Planes Carried On either side of the mess hall, and close to it so that communication may be maintained by tunnels through the snow, will be the bunk houses. The machine shop will be stocked with all machinery necessary for making repairs to airplanes, tractors, motors, etc. Heating will be by oil stoves.

Four airplanes are carried, a Ford plane, the Floyd Bennett; a Fokker, the Stars and Stripes; a Fairchild, the Virginia; and a General Airplane Corporation plane.

Most of the exploration work will be done in the Ford plane which is large enough to carry a sledge, dogs and other emergency equipment. The smaller planes will be used for scouting and mapping.

The pole lies 800 miles from the proposed site of the base and this will mean a non-stop flight of 1,600 miles when the dash is attempted.

Such a trek on foot was almost certain death after weeks of exhaustive travel. With modern equipment, it is a matter of a few hours in relative safety.

A half million cigarettes are carried, along with a ton of tobacco and a barrel of pipes. A made to order, ultraviolet ray, will be available. This device will be of tremendous importance as a substitute for sunlight during the long night. It is a lamp similar to that seen in many city homes, consisting of a vacuum tube of pure quartz, in which mercury is turned to vapor by an electric current.

The million dollar expedition has two ships that will stay in the vicinity of the South Pole two or three years. The City of New York will serve as the base-ship within the ice barrier. The Eleanor Boling will remain outside the ice barrier and act as a relief vessel.

Two other ships will transport supplies and equipment to the nearest civilization, a thousand miles away in New Zealand.

This vast expedition can live and carry on its work without contact with the world for as long a time as will be necessary for the attainment of their scientific ends. Shackle-ton, Scott, and Amundsen, and other pioneers could exist for only a few months without relief from the world beyond the ice barrier, and their data gathering facilities were extremely limited. The modern explorer collects and studies the results at his base.