Yet another ridiculous debate we seem to be having verbatim almost 50 years later. 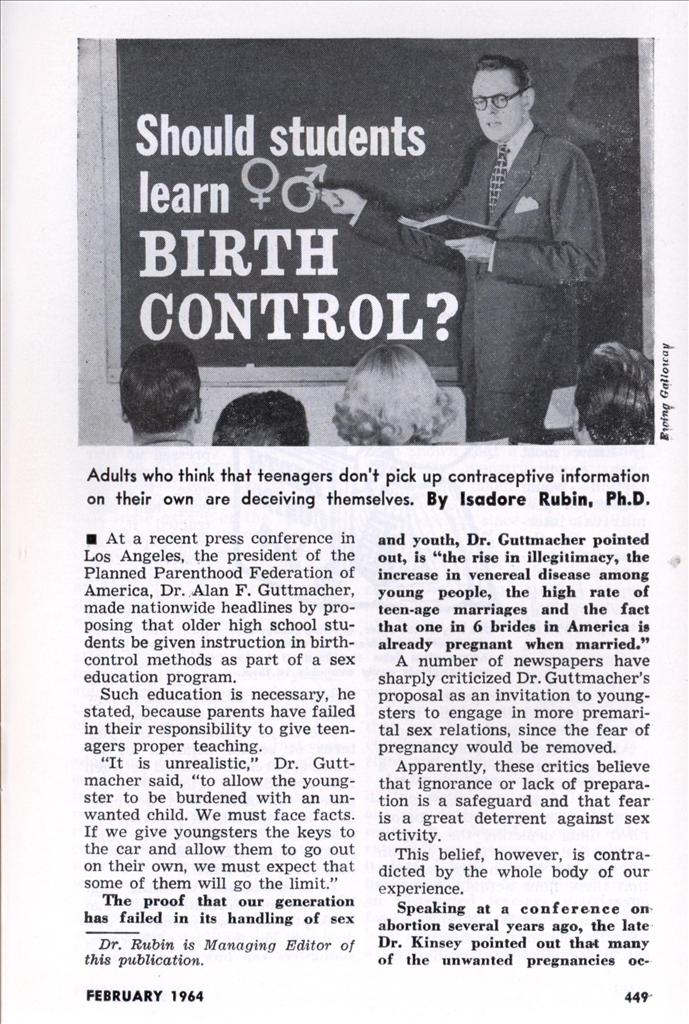 Adults who think that teenagers don’t pick up contraceptive information on their own are deceiving themselves. By Isadore Rubin, Ph.D.

At a recent press conference in Los Angeles, the president of the Planned Parenthood Federation of America, Dr. Alan F. Guttmacher, made nationwide headlines by proposing that older high school students be given instruction in birth-control methods as part of a sex education program.

Such education is necessary, he stated, because parents have failed in their responsibility to give teenagers proper teaching.

“It is unrealistic,” Dr. Guttmacher said, “to allow the youngster to be burdened with an unwanted child. We must face facts. If we give youngsters the keys to the car and allow them to go out on their own, we must expect that some of them will go the limit.”

The proof that our generation has failed in its handling of sex and youth, Dr. Guttmacher pointed out, is “the rise in illegitimacy, the increase in venereal disease among young people, the high rate of teen-age marriages and the fact that one in 6 brides in America is already pregnant when married.”

A number of newspapers have sharply criticized Dr. Guttmacher’s proposal as an invitation to youngsters to engage in more premarital sex relations, since the fear of pregnancy would be removed.

Apparently, these critics believe that ignorance or lack of preparation is a safeguard and that fear is a great deterrent against sex activity.

This belief, however, is contradicted by the whole body of our experience.

Speaking at a conference on abortion several years ago, the late Dr. Kinsey pointed out that many of the unwanted pregnancies oc- curred among the religiously devout who set out on a date with the determination that they were not going to be sinful and engage in intercourse.

With such a conviction in mind, they did not carry contraceptives. They ended up by having coitus, Kinsey remarked, and “thus we see in some of the most devout . . . extramarital pregnancies, leading ultimately to abortion or to forced marriage.”

If knowledge about contraception were a major factor in encouraging sex relations, one would expect college students — who obviously know most about contraception — would engage in premarital intercourse in the greatest numbers, The fact is, however, as every survey has shown, a much smaller proportion of college students engage in sex relations than do those who never go beyond the elementary school.

All evidence, also, points to the fact that fear has never been a major deterrent, as any army doctor can show. Although some soldiers fainted at the horror-filled films depicting the dangers of venereal disease, the figures on V.D. do not furnish any evidence that these films actually had any effect.

At the recent World Forum on Syphilis, one of the members of the Kinsey Institute for Sex Re- search, Dr. John Gagnon, presented convincing documentation to show that fear had been of minimum effectiveness in keeping persons from engaging in sexual intercourse.

For example, he pointed out, when venereal disease was a really-dread disease and its cure was neither swift nor sure, fear did not keep males from engaging in sexual contact.

Gagnon reported that, as part of their study of the sex offender, they had collected premarital histories of nondelinquent males. They found that of those who expressed no fear of venereal disease, 15.4 per cent had contracted it. Of those expressing moderate fear, the percentages rose to 20.8 per cent, while 15.3 per cent of those with strong fear had gotten venereal disease. These figures indicate clearly how small a role is played by fear.

The major changes in the patterns of sexual behavior of females apparently occurred between 1916 and 1930, 17 years before the general introduction of penicillin into the treatment of venereal disease and long before the campaigns popularizing birth control had borne any fruit.

It is unrealistic to think that birth control information today can be kept from any youngster who desires it. For the price of 50 cents, youngsters can buy on newsstands a number of paperback books which go into complete detail about birth-control techniques. It makes sense to provide students with a thorough knowledge about birth control, to counter the dangers of any smattering of incomplete or incorrect knowledge which they may pick up.

Some parents are afraid that, if they teach the adolescent directly how contraceptives are used, this might very well be interpreted by youngsters as encouragement to engage in premarital sex. This is a legitimate fear.

But the most effective kind of teaching by the parent need not be at all direct. They need not talk at their youngsters. In fact, at this age particularly indirect education may be far more effective.

There are many teachable moments in the home when a discussion about birth control can be initiated. Each day the papers discuss some aspect of the “population explosion” or the various campaigns to publicize birth control. Very often, an occasion will arise in connection with an abortion they have heard about or a friend who has gotten pregnant.

Parents can discuss these situations among themselves or with friends in the presence of youngsters. They may be sure that what they say will be listened to avidly by youngsters.

But it is in our schools that such education can be most effectively conducted. Here youngsters can learn scientifically about birth control as part of preparation for marriage. Certainly, under the proper conditions, youngsters will not consider such instruction an invitation to engage in sexual activities.

There are also a number of important trends taking place which make the early giving of information desirable.

One of the astonishing occurrences in human biology is the ever earlier maturation. It has been shown that a decline in the age of first menstruation, for example, has taken place at the “staggering” rate of 2 to 3 months every decade since the mid-19th century!

In addition, boys and girls are beginning their dating relationships and “going steady” at a much earlier age — factors which are bound to result in earlier sexual experience.

All major studies have shown that is is not fear and ignorance which result in desirable behavior, but the moral and ethical beliefs that one has been taught since childhood — a sense of what is right and wrong about sex.

As Dr. Guttmacher has well put it, “no matter how much I or any one else deplores premarital intercourse, it is bound to occur with extraordinary frequency, and when it does, i hope the young people involved will not be pressured into an ill-assorted teen-age marriage, faced with the necessity of an illegal abortion or forced to create a tragic, innocent illegitimate baby.”