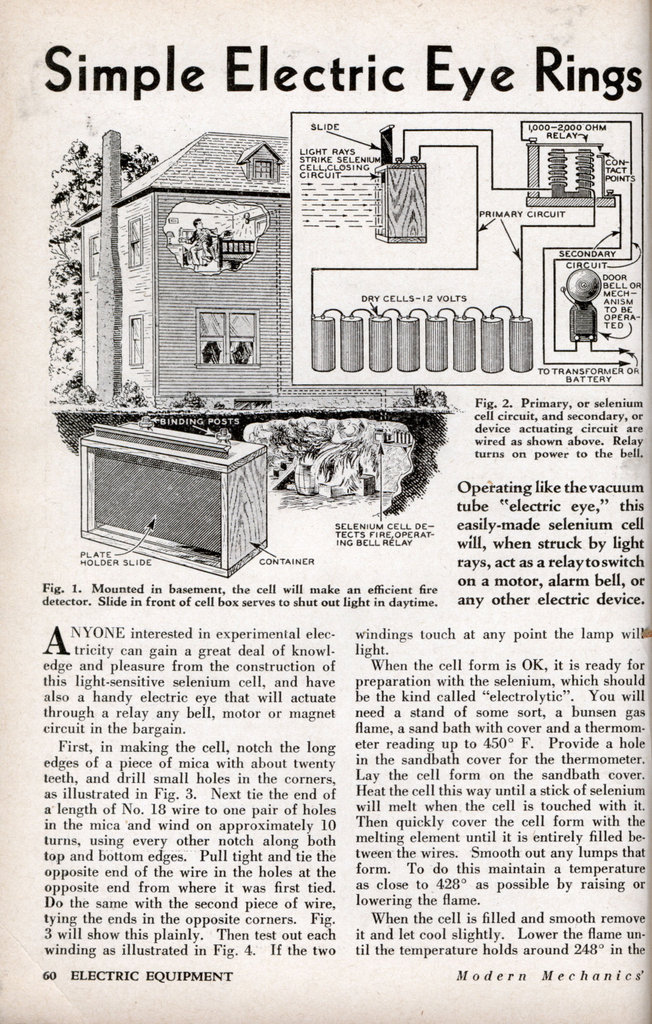 ANYONE interested in experimental electricity can gain a great deal of knowledge and pleasure from the construction of this light-sensitive selenium cell, and have also a handy electric eye that will actuate through a relay any bell, motor or magnet circuit in the bargain.

First, in making the cell, notch the long edges of a piece of mica with about twenty teeth, and drill small holes in the corners, as illustrated in Fig. 3. Next tie the end of a length of No. 18 wire to one pair of holes in the mica and wind on approximately 10 turns, using every other notch along both top and bottom edges. Pull tight and tie the opposite end of the wire in the holes at the opposite end from where it was first tied. Do the same with the second piece of wire, tying the ends in the opposite corners. Fig. 3 will show this plainly. Then test out each winding as illustrated in Fig. 4. If the two windings touch at any point the lamp will light.

When the cell form is OK, it is ready for preparation with the selenium, which should be the kind called “electrolytic”. You will need a stand of some sort, a bunsen gas flame, a sand bath with cover and a thermometer reading up to 450Â° F. Provide a hole in the sandbath cover for the thermometer. Lay the cell form on the sandbath cover. Heat the cell this way until a stick of selenium will melt when the cell is touched with it. Then quickly cover the cell form with the melting element until it is entirely filled between the wires. Smooth out any lumps that form. To do this maintain a temperature as close to 428Â° as possible by raising or lowering the flame.

When the cell is filled and smooth remove it and let cool slightly. Lower the flame until the temperature holds around 248Â° in the sandbath and then replace the cell on the cover and allow it to heat up slowly. This will crystallize the selenium and it will turn gray. Increase the temperature carefully and watch for the first sign of melting. This is shown by the edges of the selenium turning black. At the first indication remove the cell quickly, turn down the flame slightly and replace the cell. Repeat this until the heat is maintained just under the melting point. Then cover the cell with a hollow glass cover such as small glass butter dish or the like and allow it to season under this heat for three hours. When this period is up turn down the flame gradually for the next hour, then put it out altogether. Cover the affair with a heavy cloth or asbestos pad and allow it to become cold.

Now test the cell again for electrical shorts. If found perfect it is ready for mounting. Make a small wooden box into which the cell will just fit and mount it as illustrated in Figs. 1 and 3.

Close the front of the box with a slide, which can be made from an old photographic plate holder.

The hookup is shown in detail in Fig. 2. The cell, magnets of the relay and eight dry cells are wired in series. Use only a high resistance relay, preferably one of from 1000 to 2000 ohms resistance. The device actuating circuit is operated through the contact points of the relay. The relay points should be adjusted so the current will not quite close when the slide is closed. When light is admitted, the points should close sharply. Finally adjust the current flow for best action by means of a rheostat or removal of batteries.

The secondary circuit can be actuated by any available means of power from one cell up to the current of the lighting mains. Its uses are many, as suggested in the accompanying diagrams, and need only be limited by the needs of the user.

For heavy currents you may have to immerse the relay points in oil or shunt them with a suitable condenser to prevent sparking or burning of points.