Simple Experiment Shows How the Universe Was Formed (Jul, 1936)

Yes, all you need to recreate the universe is a hand-drill, a thumb tack and some oil. Amazing! 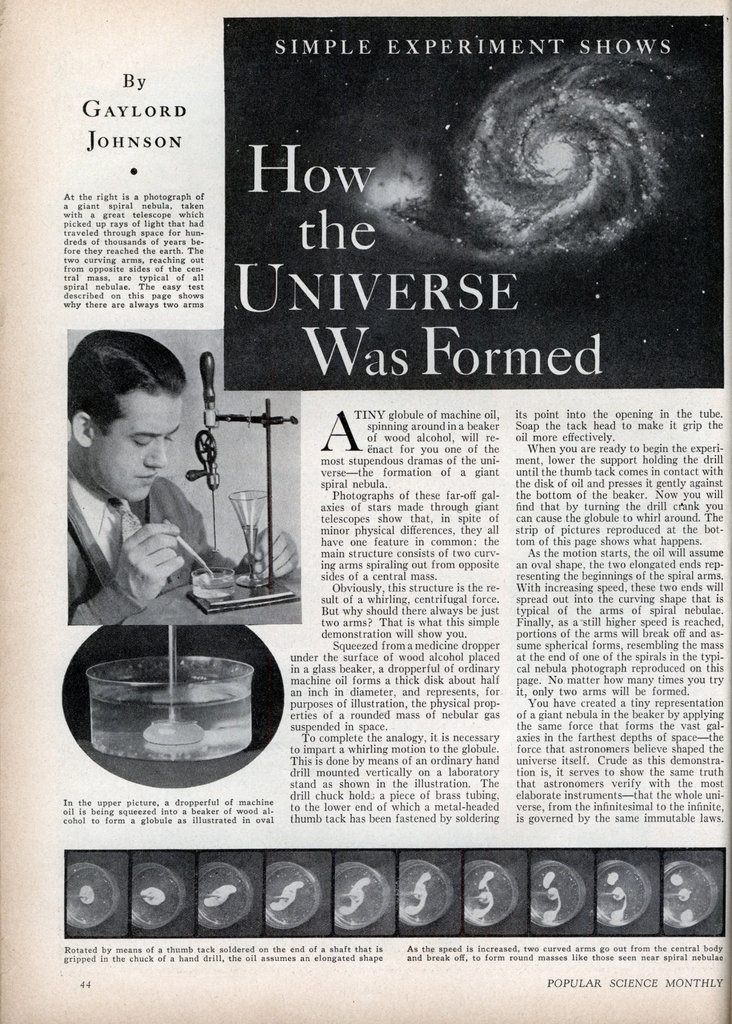 Simple Experiment Shows How the Universe Was Formed

A TINY globule of machine oil, spinning around in a beaker of wood alcohol, will reenact for you one of the most stupendous dramas of the universeâ€”the formation of a giant spiral nebula.

Photographs of these far-off galaxies of stars made through giant telescopes show that, in spite of minor physical differences, they all have one feature in common: the main structure consists of two curving arms spiraling out from opposite sides of a central mass.

Obviously, this structure is the result of a whirling, centrifugal force. But why should there always be just two arms? That is what this simple demonstration will show you.

Squeezed from a medicine dropper under the surface of wood alcohol placed in a glass beaker, a dropperful of ordinary machine oil forms a thick disk about half an inch in diameter, and represents, for purposes of illustration, the physical properties of a rounded mass of nebular gas suspended in space.

To complete the analogy, it is necessary to impart a whirling motion to the globule. This is done by means of an ordinary hand drill mounted vertically on a laboratory stand as shown in the illustration. The drill chuck holdj a piece of brass tubing, to the lower end of which a metal-headed thumb tack has been fastened by soldering its point into the opening in the tube. Soap the tack head to make it grip the oil more effectively.

When you are ready to begin the experiment, lower the support holding the drill until the thumb tack comes in contact with the disk of oil and presses it gently against the bottom of the beaker. Now you will find that by turning the drill crank you can cause the globule to whirl around. The strip of pictures reproduced at the bottom of this page shows what happens.

As the motion starts, the oil will assume an oval shape, the two elongated ends representing the beginnings of the spiral arms. With increasing speed, these two ends will spread out into the curving shape that is typical of the arms of spiral nebulae. Finally, as a still higher speed is reached, portions of the arms will break off and assume spherical forms, resembling the mass at the end of one of the spirals in the typical nebula photograph reproduced on this page. No matter how many times you try it, only two arms will be formed.

You have created a tiny representation of a giant nebula in the beaker by applying the same force that forms the vast galaxies in the farthest depths of spaceâ€”the force that astronomers believe shaped the universe itself. Crude as this demonstration is, it serves to show the same truth that astronomers verify with the most elaborate instrumentsâ€”that the whole universe, from the infinitesimal to the infinite, is governed by the same immutable laws.