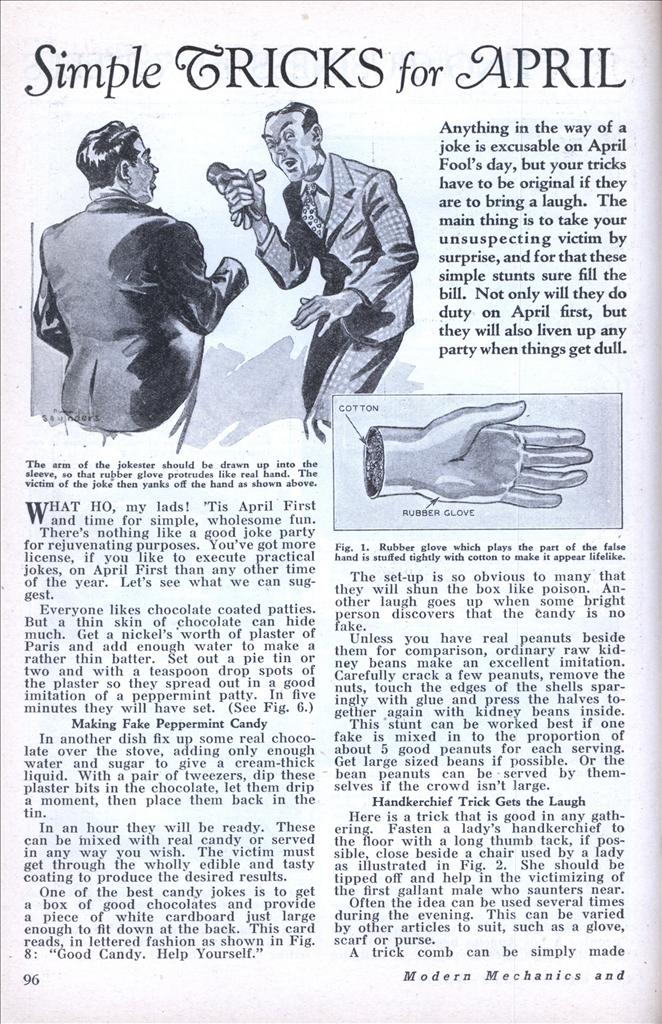 Anything in the way of a joke is excusable on April Fool’s day, but your tricks have to be original if they are to bring a laugh. The main thing is to take your unsuspecting victim by surprise, and for that these simple stunts sure fill the bill. Not only will they do duty on April first, but they will also liven up any party when things get dull.

WHAT HO, my lads! ‘Tis April First and time for simple, wholesome fun.

There’s nothing like a good joke party for rejuvenating purposes. You’ve got more license, if you like to execute practical jokes, on April First than any other time of the year. Let’s see what we can suggest.

Everyone likes chocolate coated patties. But a thin skin of chocolate can hide much. Get a nickel’s worth of plaster of Paris and add enough water to make a rather thin batter. Set out a pie tin or two and with a teaspoon drop spots of the plaster so they spread out in a good imitation of a peppermint patty. In five minutes they will have set. (See Fig. 6.) Making Fake Peppermint Candy In another dish fix up some real chocolate over the stove, adding only enough water and sugar to give a cream-thick liquid. With a pair of tweezers, dip these plaster bits in the chocolate, let them drip a moment, then place them back in the tin.

In an hour they will be ready. These can be mixed with real candy or served in any way you wish. The victim must get through the wholly edible and tasty coating to produce the desired results.

One of the best candy jokes is to get a box of good chocolates and provide a piece of white cardboard just large enough to fit down at the back. This card reads, in lettered fashion as shown in Fig. 8: “Good Candy. Help Yourself.”

The set-up is so obvious to many that they will shun the box like poison. Another laugh goes up when some bright person discovers that the candy is no fake.

Unless you have real peanuts beside them for comparison, ordinary raw kidney beans make an excellent imitation. Carefully crack a few peanuts, remove the nuts, touch the edges of the shells sparingly with glue and press the halves together again with kidney beans inside.

This stunt can be worked best if one fake is mixed in to the proportion of about 5 good peanuts for each serving. Get large sized beans if possible. Or the bean peanuts can be served by themselves if the crowd isn’t large.

Handkerchief Trick Gets the Laugh Here is a trick that is good in any gathering. Fasten a lady’s handkerchief to the floor with a long thumb tack, if possible, close beside a chair used by a lady as illustrated in Fig. 2. She should be tipped off and help in the victimizing of the first gallant male who saunters near.

Often the idea can be used several times during the evening. This can be varied by other articles to suit, such as a glove, scarf or purse.

A trick comb can be simply made which is good for any occasion for weeks afterward. Take an ordinary vest pocket comb and dip it in varnish or lacquer (clear) and let the covering harden in warm air.

Two coats will be best. The result is a comb which appears genuine but which will not comb hair! The comb can also be obtained from many novelty houses for . 10 cents.

Non-lathering Soap Bewilders Victim Put a fake bar of soap in the bath room for guests. This can be made at home in the following way. (See Figs. 9 and 10.) Get some sheet gelatin at the drug store and melt it down over a slow fire. Add a spoonful or two of water.

Set a celluloid or aluminum soap box out handy, and when ready pour the gelatin in this for a form. Then set away to cool.

The inside of the box should be greased slightly to facilitate the removal of the “soap.” It may be necessary to trim the edges slightly. You can give it a realistic look by actually using it a bit as you would soap, thus smoothing off all edges.

A small amount of some analine dye and also a couple of drops of perfume, will be worthwhile touches. What results when this soap is used, is no lather to begin with, and a thin film of the gelatin coats the hands which, if allowed to dry, gives a peculiar sensation. It can be washed off easily.

Victim Yanks Off False Hand The loose hand trick is always good. It may need a bit of rehearsing, but is not difficult. The host or hostess greets the guests at the door. He wears kid or thin cloth gloves. As the guest enters he shakes hands, but to the momentary horror of the victim his hand comes off in the guest’s.

The right glove is stuffed with cotton and the right hand is drawn back slightly into the loose-fitting coat sleeve, as demonstrated in Fig. 2. The hand actually fits into the wrist of the glove and grasps the cotton firmly enough to make the glove appear natural. The stunt can be used over and over during the evening. The Exploding Cigar Box Cigars are quite in keeping with the progress of any party. So no suspicions are aroused when you pass the exploding cigar box, shown in Figs. 3 and 4.

Get an empty box which looks as if it had just been opened. Fasten a mouse trap, with the straight wire and staple removed, to the center in the manner shown in the photo, using small nails.

Whittle a small stick, sharpened to a point at one end and with a notch in the other.

One-half inch from the inside edge of the cover, midway between the ends, make a small hole half way through the lid, with the point of your knife. Now move the jaw of the trap to “set” position, place the notched end of the stick over this and fit the point into the hole in the cover as you close it.

Mouse Trap Does the Trick Raise the lid in the usual way. If things are working properly, the mouse trap will snap.

With everything in readiness, place a pistol cap at the edge of the strap so the jaw will strike it and fasten it there with a small brad. Or you can put the brad through from underneath and thus impale the caps upon this in firing position as needed. The unsuspecting victim will take the box and get the shock of his life.

This same trick is available at many trick and novelty houses in the form of a book which has a simple cap-firing mechanism in the back.

Another cap suggestion is to fasten several caps to the under edges of a chair rocker with bits of gummed paper. Sooner or later as the victim rocks back and forth, a concussion or two will break the moment’s hilarity.

Here is one more good trick that can be used on the street. An imitation gold watch was wired to the iron grating in a sidewalk on a busy street about noon one April First. To prevent the tie from showing, the wire was soldered to the under side of the case and the wires twisted beneath one of the grating bars.

About every five minutes the setting was good for a laugh. Some passerby spied the watch and stooped to pick it up. A burst of guffaws from across the street was his cue to go away from there. An average of 1 out of five pedestrians fell for the hoax.

Besides these home-made contrivances for April First fun, you will find no end of amusing devices at low cost on the market. A large group of manufacturers and jobbers make a specialty of trick contraptions which will produce the results desired when wanted.

It is suggested that you intersperse the stunts mentioned above with a few of these more complicated articles, to add to the fun. One trick spoon on the market gets a laugh when the victim finds that the bowl falls, spilling the contents over the front of his shirt and vest.