Nothing says “vacation” like lugging a fifteen pound tape recorder and pile of adapters around with you. 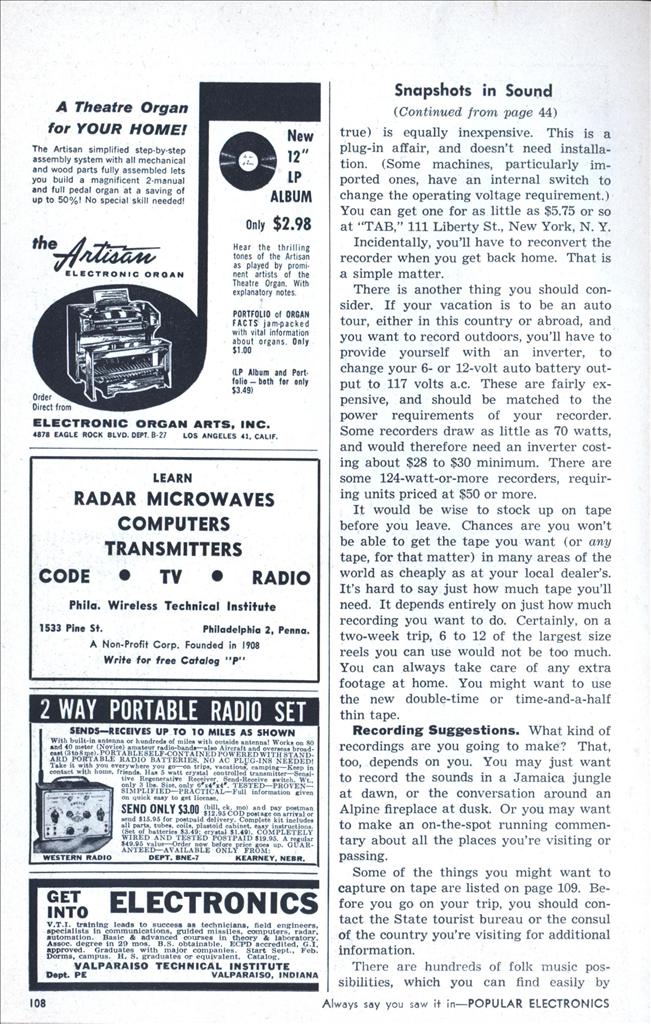 Relive your summer vacation with a record on tape

YOU’RE ALL PACKED and ready for that summer vacation you’ve planned for a whole year. You make a last-minute check. Got the bathing suits? Travelers checks? Suntan oil, guide book, maps, camera, film . . . ?

Didn’t you forget something? You took a camera, maybe even a movie camera, too, to make a permanent record of fun in the sun. But did you ever think of making a sound record of your vacation?

The results, if you do it properly, may be every bit as enjoyable as the reels of color film you’ll run during the long winter evenings . . . perhaps more so, if you can supplement some careful planning with a little bit of luck.

Recordings of just little, simple things can evoke wonderful memories of surf at the beach, the gang singing in the moonlight, talk around the campfire at that dude ranch, the thunder of the falls at Niagara, the hoot of a ferryboat passing the Statue of Liberty, or the roar of traffic at Times Square.

Narration or your description of the scenes can be put on the tape right away and intermingled with vacation sounds. If you don’t have the time to do this in detail while on vacation, it can be done later at home and spliced in at the proper point.

Another facet of your vacation recording would be to capture the scene on tape as you film it! For instance, you might take a black-and-white or color movie at the same time you record the sound effects and your thoughts.

What Kind of Recorder? In effect, you are limited only by your imagination this summer, but you should keep the following tips in mind.

For convenience, the best machine would be one of two types: the recorder whose amplifier and motor are powered by batteries, or the one whose amplifier is battery-powered but whose motor is driven by winding a spring. Be sure you take along enough batteries, or check to make certain replacements are available wherever you go.

Prices for models which have a frequency response of 50 to 6000 or 7500 cps (best for music recording) range from about $250 to $500. You can get these in speeds of 3-3/4 and 7-1/2 ips, and here you’ll have to decide which is best. For higher fidelity, pick the higher speed, but you’ll have to sacrifice playing time. For most purposes, the slower speed will do, and you’ll get a lot more recording.

If you take the standard 60-cps recorder, you will have little trouble in this country since most United States lines are 117 volts a.c., 60 cps. Small areas in a few cities may have 25 cps. Check with the utility company when you arrive.

You can send to the Superintendent of Documents, U. S. Government Printing Office, Washington, D. C., for a copy of “Electric Current Abroad,” available for 25 cents. It will give you data for every area in the world that has a generator.

Most foreign countries use 50-cycle current, with voltages varying all over the lot from 100 volts in Japan to 13,000 in Harbel, Liberia (a rubber plantation). Mostly, however, you can bank on about 220 to 240 volts.

As a general rule, power-line voltages in Canada and the West Indies seem to run about the same as the United States, although there are exceptions. Countries in Europe favor 50 cycles at 220 volts, but there are many variations even within one country.

Converting Your Machine. To record at 50 cps and have the playback at the correct speed when you get home, you’ll have to get the recorder converted. This is usually a rather simple affair, necessitating only the change of a bushing or drive wheel. Conversion kits are available for many machines at a nominal sum—the bushing will cost perhaps $4 or $5, and the labor $3 or $4.

A step-down transformer (if the voltage is higher than your machine operates on) or a step-up transformer (if the reverse is true) is equally inexpensive. This is a plug-in affair, and doesn’t need installation. (Some machines, particularly imported ones, have an internal switch to change the operating voltage requirement.) You can get one for as little as $5.75 or so at “TAB,” 111 Liberty St., New York, N.Y.

Incidentally, you’ll have to reconvert the recorder when you get back home. That is a simple matter.

There is another thing you should consider. If your vacation is to be an auto tour, either in this country or abroad, and you want to record outdoors, you’ll have to provide yourself with an inverter, to change your 6- or 12-volt auto battery output to 117 volts a.c. These are fairly expensive, and should be matched to the power requirements of your recorder. Some recorders draw as little as 70 watts, and would therefore need an inverter costing about $28 to $30 minimum. There are some 124-watt-or-more recorders, requiring units priced at $50 or more.

It would be wise to stock up on tape before you leave. Chances are you won’t be able to get the tape you want (or any tape, for that matter) in many areas of the world as cheaply as at your local dealer’s. It’s hard to say just how much tape you’ll need. It depends entirely on just how much recording you want to do. Certainly, on a two-week trip, 6 to 12 of the largest size reels you can use would not be too much. You can always take care of any extra footage at home. You might want to use the new double-time or time-and-a-half thin tape.

Recording Suggestions. What kind of recordings are you going to make? That, too, depends on you. You may just want to record the sounds in a Jamaica jungle at dawn, or the conversation around an Alpine fireplace at dusk. Or you may want to make an on-the-spot running commentary about all the places you’re visiting or passing.

Some of the things you might want to capture on tape are listed on page 109. Before you go on your trip, you should contact the State tourist bureau or the consul of the country you’re visiting for additional information.

There are hundreds of folk music possibilities, which you can find easily by checking the folk music section of any record catalog. In addition, you will discover others on your trip. You will have to keep your eyes open, ears tuned and—most important—stay in the background. There is nothing so disquieting to a native singer or instrumentalist as to have a microphone poked at him, especially by a foreigner.

Try to make arrangements in advance— it may take a few cents in American money to the person in charge—but it will be worth it when you get back home and spin those reels. It will be just as if you were on that vacation again.