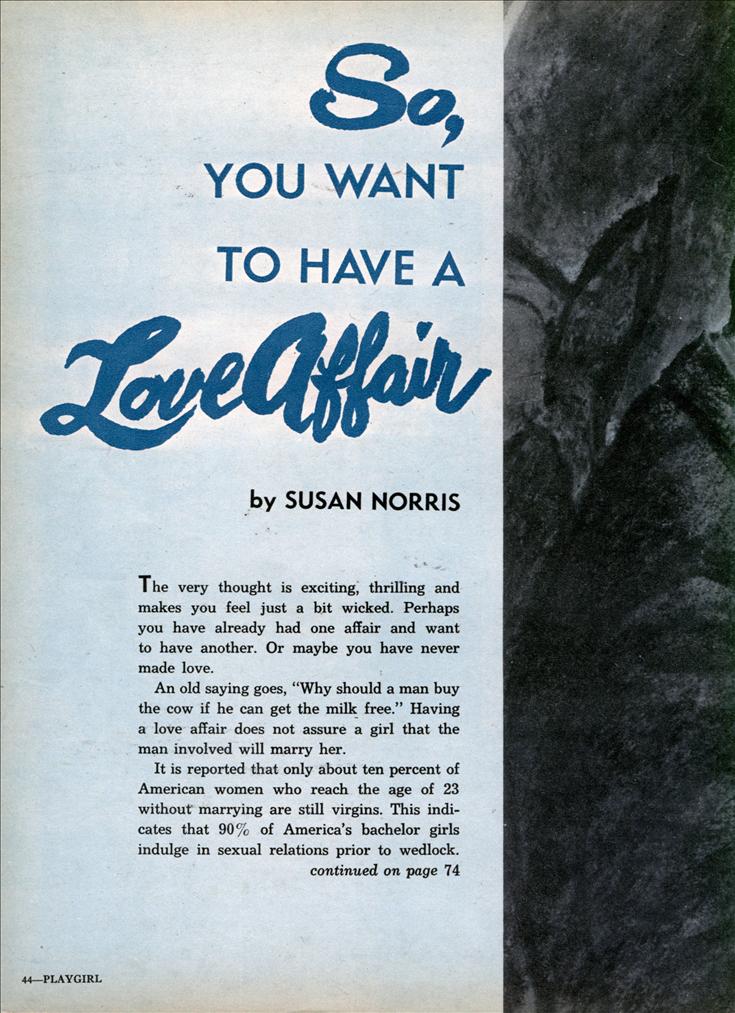 So YOU WANT TO HAVE A Love Affair

The very thought is exciting, thrilling and makes you feel just a bit wicked. Perhaps you have already had one affair and want to have another. Or maybe you have never made love.

An old saying goes, “Why should a man buy the cow if he can get the milk free.” Having a love affair does not assure a girl that the man involved will marry her.

It is reported that only about ten percent of American women who reach the age of 23 without marrying are still virgins. This indicates that 90% of America’s bachelor girls indulge in sexual relations prior to wedlock.

Having a love affair is taking chances in several directions. Outside of the fact that sexual relations can, and often do, produce children, there are other facts involved. Will the affair lead to a broken heart? Will the young man leave the girl after the union has been completed?

Most young women go to their bridal beds with at least the experience of petting, if not the complete act as part of their experience. Statistics do not re- veal how many of these girls wish they had waited until their wedding nights before going all the way.

Until recently young Americans abided by a double standard, allowing single men to enter into illicit relations, but forbidding women from doing so. This standard appears to be equalizing, however, as more and more women achieve equal status with men. During the last century the word “secretary” was assumed to mean a man. Today that meaning has changed, and a male secretary is an oddity in the business world. As women take new places in life, it is understandable” that the old standards, including those of morality, would become more up to date. But is it wise for men and women to indulge in premarital sexual relationships?

Medical science says yes, provided the relationship is entered with full understanding of what could result if precautionary measures are not taken regarding conceiving children. Science admits that a sexually satisfied person, both male and female, leads a more balanced life than a person who is sexually frustrated. Moodiness, depression, even bad skin and nervousness, can be alleviated by satisfying nature’s sexual urge which belongs on the scale of human needs along with breathing, sleeping, and eating.

The sexual urge is neither sinful nor lusty, but is normal and healthy. Only when people pervert it or use it greedily does it become tainted.

On the other hand. Theologians teach that humanity’s highest expression comes from the spiritual or mental side of man. and thus sexual expression is linked with the lowly, animal side of life. It is believed to be God’s way of joining man and woman in holy matrimony, for the purpose of bringing forth children.

If you are thinking seriously of having a love affair, there is another chance you must consider, possibly the greatest factor involved. Will you be able to live with yourself afterward? No matter how fulfilling and ecstatic the moment of making love is, will you be able to face yourself in the mirror the next morning?

Most psychiatrist’s offices are filled with people who suffer from the curse that accompanies advancing civilization and sophisticated living, that of guilt. From guilt numerous complexes and neuroses can spring.

If your conscience whispers that you would suffer agony, regret and guilt over having a love affair, it would be unwise to enter the relationship no matter how much you desire it. On the other hand, if your heart cries to make love, only you can make the decision and face the consequences, if there are any, afterward.

A mother once said to her teenage daughter, “Sex is like a banana. You can’t know its flavor until you’ve tasted it, but after the first bite you will probably enjoy the fruit and want more.” One love affair can lead to another. On the other hand, it might lead to a well-rounded marriage. Nobody knows what the outcome will be when she is only at the onset.

Not all love affairs produce offspring, but they all produce memories and feelings, sometimes sunny happiness and sometimes only cloudy bitterness and disappointment. For those who don’t know whether to have a love affair or not, it might be appropriate to think of the popular song which says, “Love and marriage, love and marriage, go together like a horse and carriage.,,