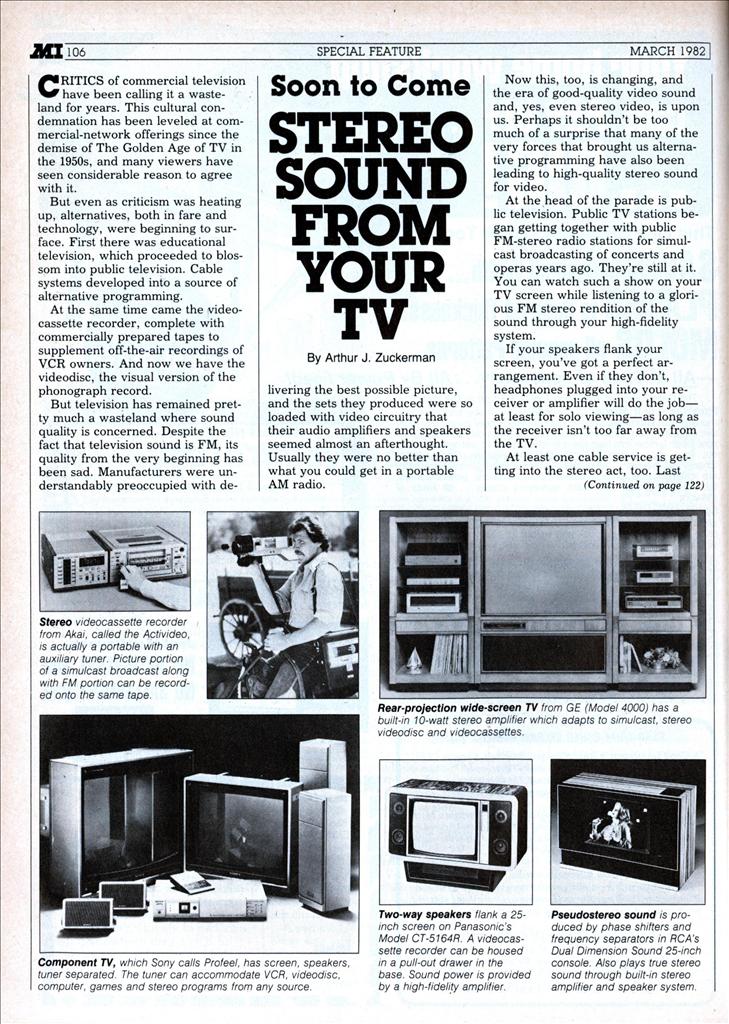 Soon to Come STEREO SOUND FROM YOUR TV

CRITICS of commercial television have been calling it a wasteland for years. This cultural condemnation has been leveled at commercial-network offerings since the demise of The Golden Age of TV in the 1950s, and many viewers have seen considerable reason to agree with it.

But even as criticism was heating up, alternatives, both in fare and technology, were beginning to surface. First there was educational television, which proceeded to blossom into public television. Cable systems developed into a source of alternative programming.

At the same time came the video-cassette recorder, complete with commercially prepared tapes to supplement off-the-air recordings of VCR owners. And now we have the videodisc, the visual version of the phonograph record.

But television has remained pretty much a wasteland where sound quality is concerned. Despite the fact that television sound is FM, its quality from the very beginning has been sad. Manufacturers were understandably preoccupied with de- livering the best possible picture, and the sets they produced were so loaded with video circuitry that their audio amplifiers and speakers seemed almost an afterthought. Usually they were no better than what you could get in a portable AM radio.

Now this, too, is changing, and the era of good-quality video sound and, yes, even stereo video, is upon us. Perhaps it shouldn’t be too much of a surprise that many of the very forces that brought us alternative programming have also been leading to high-quality stereo sound for video.

At the head of the parade is public television. Public TV stations began getting together with public FM-stereo radio stations for simulcast broadcasting of concerts and operas years ago. They’re still at it. You can watch such a show on your TV screen while listening to a glorious FM stereo rendition of the sound through your high-fidelity system.

If your speakers flank your screen, you’ve got a perfect arrangement. Even if they don’t, headphones plugged into your receiver or amplifier will do the job— at least for solo viewing—as long as the receiver isn’t too far away from the TV.

At least one cable service is getting into the stereo act, too. Last summer Warner/Amex inaugurated Music Television (MTV), a 24-hour rock-TV music network that transmits its sound in Dolby stereo via an FM multiplex signal. The stereo can be received by using an inexpensive signal splitter to attach the cable to both a television receiver and an FM tuner’s antenna terminals.

Another boost to stereo video has come from the Philips videodisc sys- tem, now being marketed as Magnavox Magnavision and Pioneer LaserDisc. These systems carry their program information in the form of pits on the reflective surface of a disc. The length and spacing of the pits carry the encoded information, which is scanned by a laser optical system. This system has enough capacity to carry stereo sound, and most of the programs being offered on disc do have such stereo sound tracks. The players have audio output jacks that permit hookup to your regular home stereo receiver.

The most recent booster of stereo video has been the appearance of stereo in videocassette recorders. Last summer Akai introduced a portable VCR with stereo sound-recording capability. It can record the picture portion of a simulcast from a companion tuner-timer unit and the sound portion from an FM stereo receiver.

Like most home VCRs, the Akai recorder has a frequency range limited to 10,000 Hz, substantially short of the 15,000-Hz top limit of FM broadcasting. But it does offer Dolby noise reduction for the cleanest possible sound and most of the content of the average musical performance falls within the 10,000-Hz range.

Actually, a number of videocassette recorders with stereo sound are available today in Japan. This isn’t too surprising because Japan also has enjoyed television broadcasting with stereo sound for several years. Two audio channels are provided by Japanese telecasters in much the same way that we receive FM stereo in the United States. The second channel is encoded on a subcarrier which modulates the main audio carrier. This piggyback arrangement is called a multiplex system.

The two resulting audio channels are used by the Japanese in two different ways. Music programs are usually broadcast in stereo. But Japanese telecasters also offer dual-language programming, with Japanese on one channel and English on the other. (English is a mandatory subject in Japanese schools.) Home viewers can select the language they want to hear by using a switch on their receivers.

Last fall, broadcasters in West Germany also began to offer stereo telecasts. The German approach to stereo TV is simpler than the Japanese. Because their video band-widths are relatively broad, the Germans simply employ two discrete audio channels with each of their video channels.

During the past year many domestic and foreign television manufacturers finally have begun to pay attention to sound quality in their offerings for the American market, at least in their higher-priced models. If you’re in the market for a new, better-quality color set, a number of approaches to better audio are now available to you.

One is simply improved amplifiers and speakers, including two-way speaker systems. Another is pseudo stereo, employing electronic trickery to give the illusion of two-channel sound. There are also nongimmicked, monophonic television receivers that have their own stereo sound systems and inputs for playing material fed from external stereo sources.

This approach is becoming tied into the growing trend to projection television with its large screen, for which stereo sound is particularly effective. Typical are General Electric’s rear-projection Widescreen 4000, which has a 10-watt-per-chan-nel stereo amplifier driving a pair of speakers with 2-inch tweeters and 8-inch woofers. Magnavox’s 50-inch rear-projection offering is similar. It has an 8-watt-per-channel amplifier, and its speakers have 3-inch tweeters and 8-inch woofers. These projection units can accept stereo sound from simulcasts, videodiscs or videotapes.

Mitsubishi Electric has gone a step further to make simulcast stereo oven easier to enjoy. Its Model 2582 television receiver actually has an FM stereo tuner built in, and it provides for simultaneous reception of an FM broadcast with a telecast.

Although Panasonic has not yet joined the stereo television ranks in its American market, it does offer a couple of receivers with dual, two-way speaker systems for richer monophonic sound. One is a 25-inch console with two sets of woofers and tweeters flanking the screen. Another is a 45-inch rear-projection system with a similar audio arrangement.

True stereo from external sources is provided for by RCA in its front-projection TV offering. Its built-in speaker system consists of a pair of 2-inch tweeters and two 5-inch woofers. There is also provision for driving external speakers from the set’s stereo amplifier.

But RCA’s most innovative offering is its Dual Dimension Sound, which employs phase shifting and the separation of certain frequencies within the tonal spectrum to give the illusion of true stereo sound. Consoles with this feature have dual speaker systems and stereo amplifiers that also accept true stereo from external sources. Several table models, which are equipped with only one speaker, have stereo outputs through which they can feed Dual Dimension Sound to an externally-located stereo system.

One of the newest developments in video lends itself particularly well to stereo sound—component television. This concept is being pursued by Sony with its Profeel line. Sony offers Profeel monitors with either 19-inch or 25-inch screens. A separate tuner has auxiliary audio and video inputs that accept signals from videotape recorders, videodisc players, home computers, video games or other sources. Also offered is a choice of two speaker systems, both two-way. A small model is designed to mount on the sides of either Profeel screen; the other consists of much larger, freestanding units. Sony says its Profeel components can be adapted to receive stereo and multichannel telecasts when they become available in the United States.

Such broadcasting may become reality here sooner than you might think. The Electronic Industries Association has recently conducted a series of stereo tests over Chicago’s WTTW-TV after regular broadcast hours. Under study were three systems. One of these is a modified version of the Japanese system, as represented by Sony on behalf of the Electronic Industries Association of Japan.

The other two systems tested are entries by Telesonics Inc. and by Zenith.

The Electronic Industries Association has set considerably more stringent requirements than are asked of broadcasters in Japan. Instead of stereo or bilingual service, EIA wants stereo and bilingual service. Naturally, the stereo service must be compatible with monophonic telecasting, and the bilingual service cannot create any interference by leaking into the English service. EIA also wants an administrative channel for sending technical instructions through a network.

But EIA can only offer its results and make recommendations to the Federal Communications Commission. It is this federal agency that has the last word, making the rules by which American broadcasters must operate.

But when EIA’s work has been carefully reviewed by the people in Washington, we may find that the era of stereo television broadcasting in the United States won’t be far off.