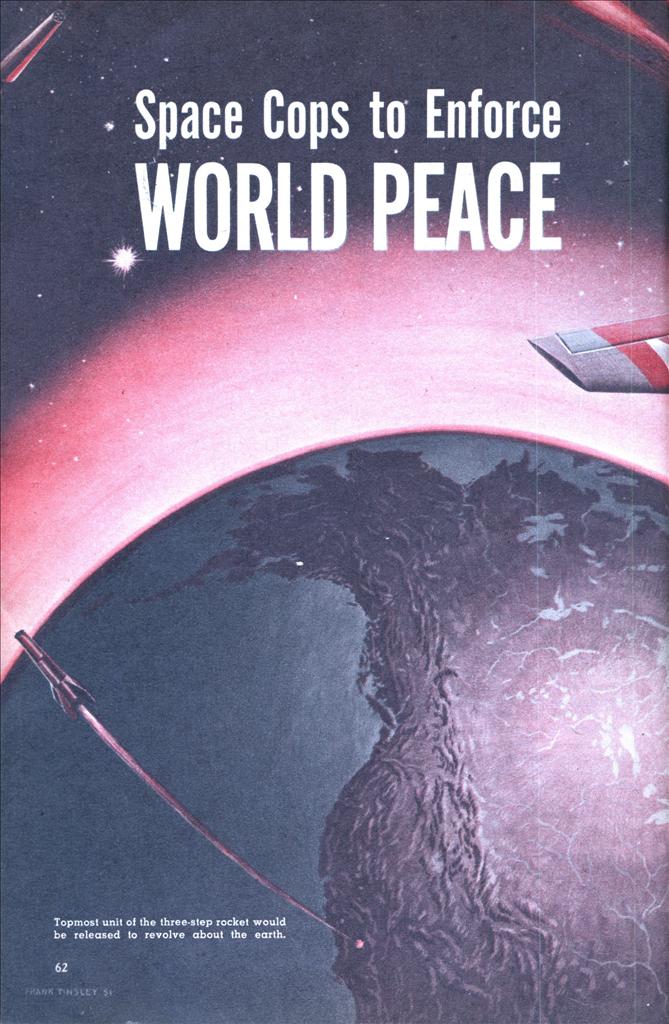 Man-made satellite rocketships may soon revolve in endless orbits around the earth, policing our civilization.

NATIONS of the world are racing to send the first man-made satellite revolving in an endless orbit around the earth. In the hands of an agressor, such a machine might mean slavery for all mankind, but as a police unit of the United Nations, it holds a promise of world peace.

Back in the closing days of 1948, when Secretary of Defense James Forrestal disclosed the existence of an “earth satellite vehicle program,” the press and public reacted with a gasp of incredulous amazement. For the first time, responsible officials had dared to admit that they were seriously investigating the fantastic dreams of Sunday-supplement screwballs!

To those in the know, however, the news was no surprise. The snowballing mass of scientific data on the space around us was no great secret. The problems involved in space travel â€”physical, engineering and human â€”were being methodically tackled and licked. Rocket designers’ slip-sticks were getting hot. Astronomers were calculating take-off ellipses and orbits. Physicists were feeding figures into vast mechanical brains and medical specialists were busy with the human angle.

Then, under the pressure of political crises, the furor was forgotten. No further news was forthcoming and, space wise, John Q. Public went back to sleep.

However, it was a short nap. During the past year, John Q. awoke again to a realization that this space stuff was more than mere entertainment. He heard solid technical men like William B. Bergen, vice president and chief engineer of the Glen L. Martin aircraft company, predict earth satellites in ten years.

Early in September, too, Space Medicine, a book edited by Prof. John P. Marbarger, Director of Research in the Aeromedical and Physical Environment Laboratory, was published. This book on the medical aspects of space travel is a symposium by eminent specialists in the field, including the Surgeon General of the Air Force. It covers the physical hazards of interplanetary travel, the effects of rapid acceleration and loss of gravity, bioclimatology and the possibility of life on other planets in a scientific manner that leaves no doubt of the book’s seriousness.

Then there was the meeting in London of the International Congress on Astronautics sponsored by the British Interplanetary Society. Gathered there were the world’s leading rocket engineers, physicists, astronomers and space scientists. The consensus of opinion of the Congress was that a 50-ton earth satellite vehicle would be boring through space about 300 . miles above the earth at a speed of 18,000 mph within a decade. In 25 years, they believe, flights to the moon may be possible.

A paper on practical interplanetary rocket design by Dr. Wernher von Braun was even more specific. Technical director of Germany’s wartime rocket research station at Peenemunde, Dr. Braun is the designer of the famous V-2 and now heads Uncle Sam’s secret rocket center at Fort Bliss, Tex. He believes that all the basic engineering know-how to build a chemical fuel satellite is now at hand. Given sufficient money, it could be ready to go in five years! What’s more, he has a preliminary design on paper right now, in the form of a huge, three-step rocket.

This multiple-step rocket builds up, by successive increments, sufficient speed to break the grip of the earth’s gravitational pull. This escape velocity is roughly 23,000 feet per second. The theory is simple enough. A three-stepper is three rockets in one, nesting atop each other. The topmost unitâ€”the satellite vehicleâ€”-carries the crew, instruments, etc. The lower two are simply booster rockets to build up speed.

Having reached escape velocity outside the earth’s atmosphere, the power is then cut off and the satellite coasts through space in a long curve. There is no loss of speed as the ship is now operating in a vacuum with no friction to slow it down. When the curve of its trajectory equals the curvature of the globe and the outward pull of its weight exactly counterbalances the inward pull of terrestial gravity, the ship revolves endlessly around the earthâ€”a man-made moon.

A satellite rocket of this type is shown in the accompanying illustrations. It differs from von Braun’s concept in that provision is made for the satellite unit’s return to earth when its air supply approaches exhaustion. For this purpose, it is fitted with wings and stabilizers mounted in canard (tail-first) form. As in the recently unveiled X-5 supersonic plane, these have an adjustable degree of sweep-back, ranging from 40 degrees for rocket take-off to 10 degrees for landing as an airplane.

In the extended position, considerably more wing area is exposed, permitting a slower landing. The wing loading is further decreased by dropping the satellite’s fuel tanks and rocket engines just prior to landing. Records, films, and three of the four man crew are also parachuted to safety leaving only the pilot to bring her in.

A jet engine with separate fuel tanks, centrally mounted beneath the passenger cabin, is uncovered when the encircling rocket engine ring is dropped. This gives the pilot complete control during the final approach. The main landing wheels are also uncovered. Unfolded, they form a conventional tricycle gear with the nose wheel mounted in the lower tip of the vertical stabilizer.

Air, food, clothing and living equipment are being worked out by the Air Force’s Space Medicine Labs. Correct angles of ascent, orbits and braking ellipses through the atmosphere for slowing down the satellite on her return journey are probably already winking through the maze of tubes in mechanical brains. For there is still much to be done before the Columbus of space is outward bound.

But, given the go-ahead, it can be done and in a reasonable amount of time. Meanwhile, John Q. Public can only sit tight and hope that the first permanent space-buggy is a benign one, set whirling by the United Nations and carrying space cops to enforce peace on earth instead of war.