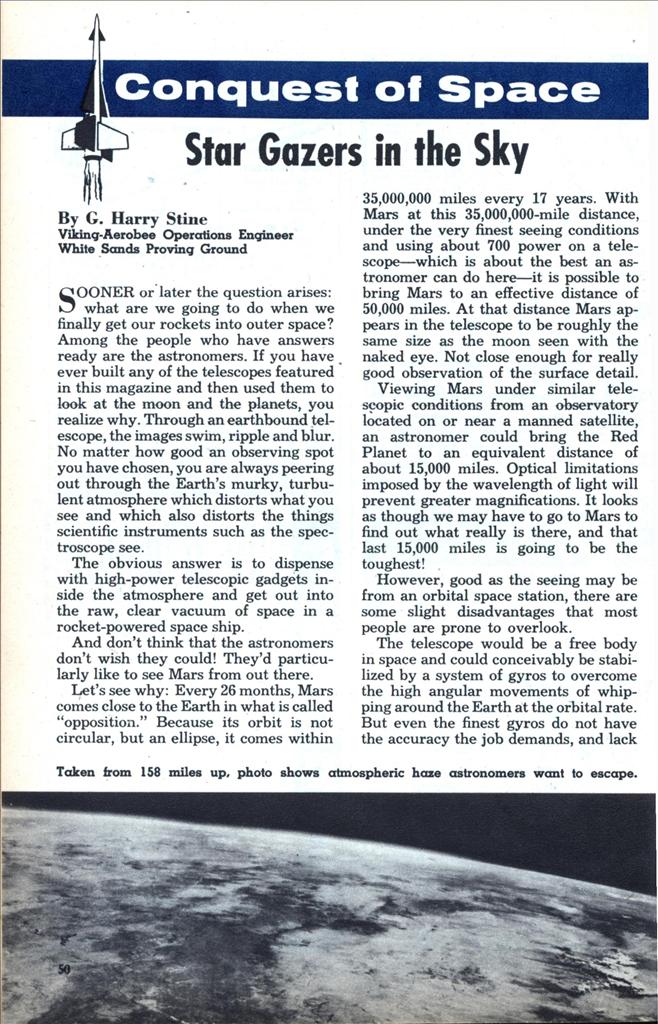 Star Gazers in the Sky

SOONER or later the question arises: what are we going to do when we finally get our rockets into outer space? Among the people who have answers ready are the astronomers. If you have ever built any of the telescopes featured in this magazine and then used them to look at the moon and the planets, you realize why. Through an earthbound telescope, the images swim, ripple and blur. No matter how good an observing spot you have chosen, you are always peering out through the Earth’s murky, turbulent atmosphere which distorts what you see and which also distorts the things scientific instruments such as the spectroscope see.

The obvious answer is to dispense with high-power telescopic gadgets inside the atmosphere and get out into the raw, clear vacuum of space in a rocket-powered space ship.

And don’t think that the astronomers don’t wish they could! They’d particularly like to see Mars from out there.

Let’s see why: Every 26 months, Mars comes close to the Earth in what is called “opposition.” Because its orbit is not circular, but an ellipse, it comes within 35,000,000 miles every 17 years. With Mars at this 35,000,000-mile distance, under the very finest seeing conditions and using about 700 power on a telescope—which is about the best an astronomer can do here—it is possible to bring Mars to an effective distance of 50,000 miles. At that distance Mars appears in the telescope to be roughly the same size as the moon seen with the naked eye. Not close enough for really good observation of the surface detail.

Viewing Mars under similar telescopic conditions from an observatory located on or near a manned satellite, an astronomer could bring the Red Planet to an equivalent distance of about 15,000 miles. Optical limitations imposed by the wavelength of light will prevent greater magnifications. It looks as though we may have to go to Mars to find out what really is there, and that last 15,000 miles is going to be the toughest!

However, good as the seeing may be from an orbital space station, there are some slight disadvantages that most people are prone to overlook.

The telescope would be a free body in space and could conceivably be stabilized by a system of gyros to overcome the high angular movements of whipping around the Earth at the orbital rate. But even the finest gyros do not have the accuracy the job demands, and lack the stability of good old terra firma. Remember now that Mars is a small object in the sky, only 25 seconds of arc across at its best. Since most observations will be made photographically—or by television if enough definition can be developed in a TV system—the telescope will have to be pointed very accurately by the gyros over a long period of time. And gyros just don’t behave that well.

On top of that, every motion made by the operator if he remains in the telescope cage will tend to throw the scope off. If the operator leaves the cage during exposure and returns afterward, the scope may still be displaced by the change in mass.

Professor Clyde W. Tombaugh, Arthur C. Clarke, and others have a better idea. It is still possible to keep a telescope in pure vacuum and anchor it to something big and solid at the same time. Take it to the moon! From there it would be possible to carry out extensive and prolonged studies not only of the planets, but of the stars and the distant spiral galaxies with a definition and clarity only dreamed of today.

It has been estimated that a 24-inch reflecting telescope on the surface of the moon in the absence of a turbulent atmosphere could produce the same results as the Palomar 200-inch telescope on Earth!

There are several astronomers who would like to tackle a stop-gap measure to provide some data before the space ships are ready. They would like to lift a telescope to 100,000 feet under one of the Air Force polyethylene balloons. That gets them up to the point where about 98 percent of the atmosphere is below them, and that is a help! But they still have to fight the sky glow caused by excited oxygen and nitrogen atoms in the ionosphere.

Astronomers are standing on the threshold of a new era. Centuries ago they had no telescopes and had to depend on their eyes; even so, they did a fine job of charting the stars and plotting the motions of the planets. Galileo’s telescope opened new vistas for them and changed their ideas of the universe tremendously. Now, we are about to journey into the realms the astronomers have watched for so long, and the astronomers will go along. Undoubtedly, what they will find will change our ideas of the universe as radically as the use of the telescope did. •