I presume this article is talking about a neutron star, the idea of which was only about two years old at this point. Neutrons had only been discovered four years previously, in 1932.

However, since the first neutron star wasn’t discovered until 1965, it would seem that Kuiper was wrong. And yes, he is the person the Kuiper Belt is named after.

Update: As Jari points out in the comments, he was probably talking about a white dwarf star, not a neutron star. You’d think after listening to 200+ episodes of Astronomy Cast I’d have known better. It does, however, give me a chance to plug my favorite podcast, so that’s a plus. 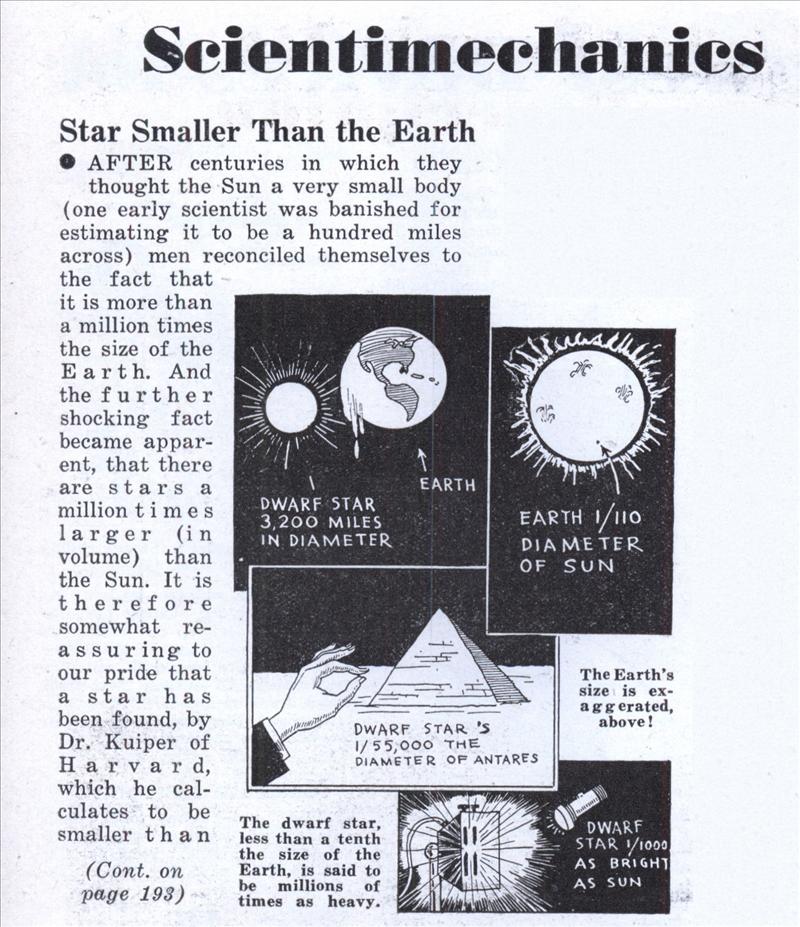 Star Smaller Than the Earth

AFTER centuries in which they thought the Sun a very small body (one early scientist was banished for estimating it to be a hundred miles across) men reconciled themselves to the fact that it is more than a million times the size of the Earth. And the further shocking fact became apparent, that there are stars a million times larger (in volume) than the Sun. It is therefore somewhat reassuring to our pride that a star has been found, by Dr. Kuiper of Harvard, which he calculates to be smaller than

the Earth and, in fact, only about the size of the smallest planet, Mercury. However, since stars, however small or dim, or large and bright, are believed to have masses somewhere in the order of that of the Sun, the conclusion is that this little star must be composed of matter millions of times heavier than that in the Earth—that is, a cubic inch of it would contain a million times more atoms than a cubic inch of platinum. And, since the pull of gravity at the star’s surface would be millions of times as great on each atom, a cubic mile of it would weigh more than the whole Earth!

Assuming the figures to be correct, we find that the diameter of our Sun is about 270 times that of the dwarf star. And recent figures indicate that the giant red star Antares, which we see in the southern summer sky, is 200,000,000 miles in diameter, or 233 times the diameter of the Sun. Between the largest and smallest stars, therefore, there is a ratio of diameters of 63,000 to 1; and, in bulk, of 25,000,000,000,000 to 1; or that of the Great Pyramid to a grain of sand. However, the discrepancy in mass is less; as explained by astronomers, a star cannot shine if it is too light or too heavy. Antares is almost a vacuum; the Sun has little more than the mass of an equal bulk of water; while the dwarf star, if it should hit our Sun, would probably go through it like a bullet through a pumpkin. (Some such a collision may have produced the Earth and the other planets.)

However, such a collision is not apt to happen and, if it does, there will be plenty of warning. The distance of his dwarf is estimated by Dr. Kuiper at 50 “light-years”*; if it were traveling with the highest velocity among stars in this system, directly toward us, it would not arrive for 50,000 years. Its brightness is what astronomers call magnitude 13-1/2; that is, it would have to be 800 times as bright, or 28 times as close, to be seen with the naked eye. From this, its brilliancy is about 1/1000 that of the Sun; but, since it presents only 1/72,900 of the sun’s surface, it must shine 73 times as brightly per square inch of surface. This is confirmed by the fact that its light is very much bluer than the Sun’s, indicating a much higher temperature. In addition, such stars are so heavy that light itself has difficulty in escaping from their gravitation—for the explanation of which you must ask Einstein.

It may be said that these calculations are based on a great many assumptions, each of which may introduce an element of error. The reasoning which has been followed out was explained in the January issue of this magazine, on page 37.

*A light-year, the astronomer’s yardstick, is the distance light will travel, at 186,000 miles a second, in one year; or about six million million miles. Distances of stars are estimated in light-years; those of distant nebulas, or universes of stars, in millions of light-years.