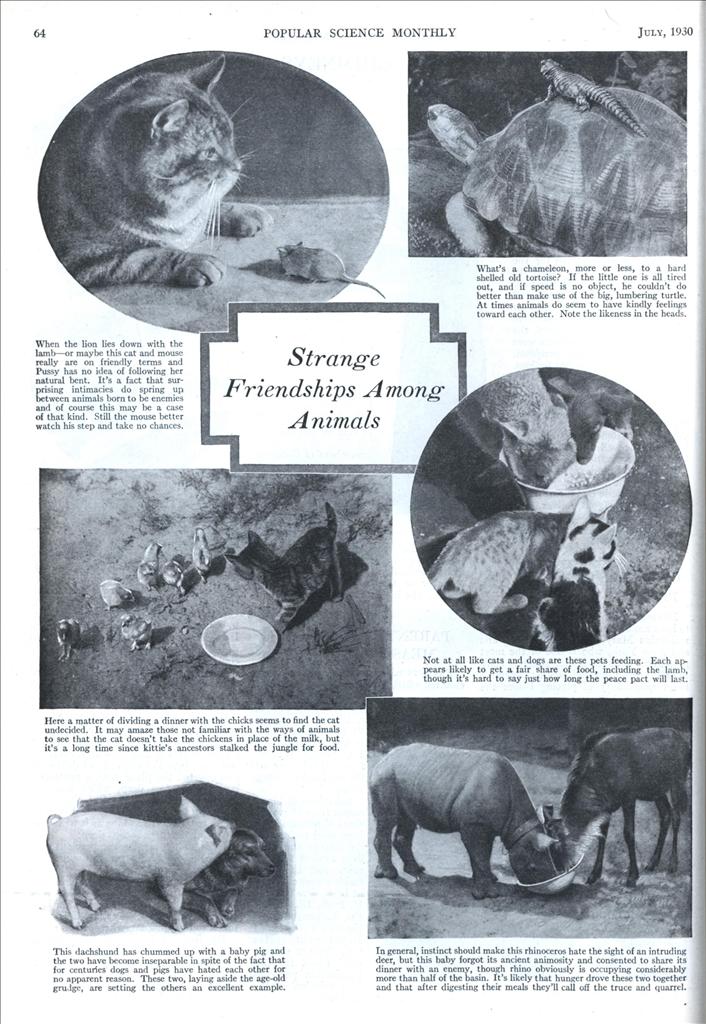 When the lion lies down with the lamb—or maybe this cat and mouse really are on friendly terms and Pussy has no idea of following her natural bent. It’s a fact that surprising intimacies do spring up between animals born to be enemies and of course this may be a case of that kind. Still the mouse better watch his step and take no chances.

Here a matter of dividing a dinner with the chicks seems to find the cat undecided. It may amaze those not familiar with the ways of animals to see that the cat doesn’t take the chickens in place of the milk, but it’s a long time since kittie’s ancestors stalked the jungle for food.

This dachshund has chummed up with a baby pig and the two have become inseparable in spite of the fact that for centuries dogs and pigs have hated each other for no apparent reason. These two, laying aside the age-old grudge, are setting the others an excellent example.

What’s a chameleon, more or less, to a hard shelled old tortoise? If the little one is all tired out, and if speed is no object, he couldn’t do better than make use of the big, lumbering turtle. At times animals do seem to have kindly feelings toward each other. Note the likeness in the heads.

Not at all like cats and dogs are these pets feeding. Each appears likely to get a fair share of food, including the lamb, though it’s hard to say just how long the peace pact will last.

In general, instinct should make this rhinoceros hate the sight of an intruding deer, but this baby forgot its ancient animosity and consented to share its dinner with an enemy, though rhino obviously is occupying considerably more than half of the basin. It’s likely that hunger drove these two together and that after digesting their meals they’ll call off the truce and quarrel.