I’m not that great at physics, but this seems to violate the conservation of momentum… 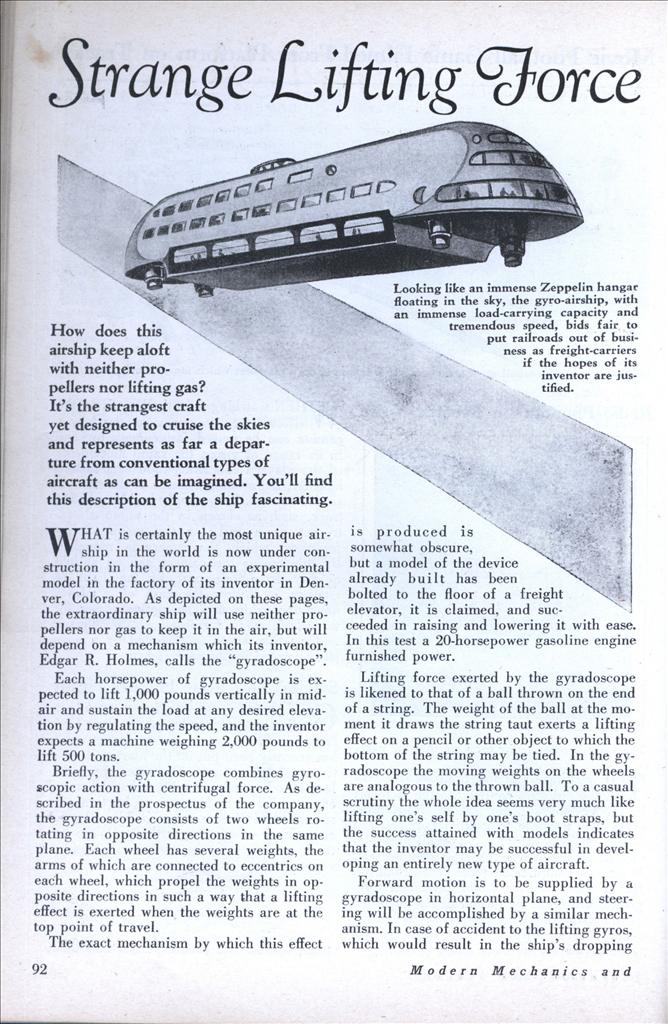 How does this airship keep aloft with neither propellers nor lifting gas? It’s the strangest craft yet designed to cruise the skies and represents as far a departure from conventional types of aircraft as can be imagined. You’ll find this description of the ship fascinating.

WHAT is certainly the most unique airship in the world is now under construction in the form of an experimental model in the factory of its inventor in Denver, Colorado. As depicted on these pages, the extraordinary ship will use neither propellers nor gas to keep it in the air, but will depend on a mechanism which its inventor, Edgar R. Holmes, calls the “gyradoscope”.

Each horsepower of gyradoscope is expected to lift 1,000 pounds vertically in midair and sustain the load at any desired elevation by regulating the speed, and the inventor expects a machine weighing 2,000 pounds to lift 500 tons.

Briefly, the gyradoscope combines gyroscopic action with centrifugal force. As described in the prospectus of the company, the gyradoscope consists of two wheels rotating in opposite directions in the same plane. Each wheel has several weights, the arms of which are connected to eccentrics on each wheel, which propel the weights in opposite directions in such a way that a lifting effect is exerted when the weights are at the top point of travel.

The exact mechanism by which this effect is produced is somewhat obscure, but a model of the device already built has been bolted to the floor of a freight elevator, it is claimed, and succeeded in raising and lowering it with ease. In this test a 20-horsepower gasoline engine furnished power.

Lifting force exerted by the gyradoscope is likened to that of a ball thrown on the end of a string. The weight of the ball at the moment it draws the string taut exerts a lifting effect on a pencil or other object to which the bottom of the string may be tied. In the gyradoscope the moving weights on the wheels are analogous to the thrown ball. To a casual scrutiny the whole idea seems very much like lifting one’s self by one’s boot straps, but the success attained with models indicates that the inventor may be successful in developing an entirely new type of aircraft.

Forward motion is to be supplied by a gyradoscope in horizontal plane, and steering will be accomplished by a similar mechanism. In case of accident to the lifting gyros, which would result in the ship’s dropping like a plummet, auxiliary machines are provided which are kept running at idling speed ready to be called upon in an emergency. Four hydraulic landing feet, one on each corner of the ship, absorb the shock of landing, which is expected to be insignificant since rate of descent is controlled by speed of the gyradoscope. Mr. Holmes, inventor of the gyro-ship, also has the invention of a popular front wheel drive for autos to his credit, as well as a four wheel drive and a caloric steam engine.

This latter machine would supply the power for the airship. As developed by Mr Holmes, waste heat from oil combustion is used in the caloric engine to convert water into steam, which drives a turbine, and is then condensed to be used over again.