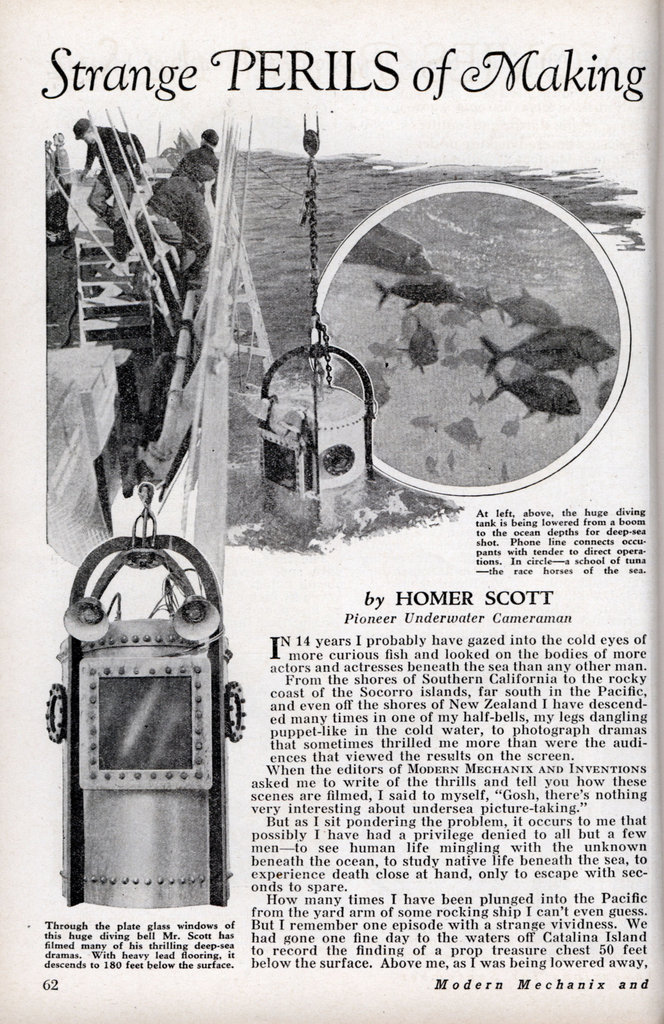 But as I sit pondering the problem, it occurs to me that possibly I have had a privilege denied to all but a few menâ€”to see human life mingling with the unknown beneath the ocean, to study native life beneath the sea, to experience death close at hand, only to escape with seconds to spare.

How many times I have been plunged into the Pacific from the yard arm of some rocking ship I can’t even guess. But I remember one episode with a strange vividness. We had gone one fine day to the waters off Catalina Island to record the finding of a prop treasure chest 50 feet below the surface. Above me, as I was being lowered away, stretched a nearly-new steel cable which had been recently tested to a breaking strength of 30 tons. Down I went . . . ten feet . . . twenty . . . thirty. Then suddenly I shot downward. The cable had parted.

I kept my legs drawn under me as I neared the floor of the ocean, drawing great gulps of air into my lungs for the long ascent to the surface, if, indeed, I could get clear of the bell. I knew I had only a few seconds, for the air line had parted and water was pouring in through the hose.

Those on deck knew what had happened instantly when the weight was released so suddenly. Without pausing to consider his personal danger, I learned later, Fred, a prominent assistant director whom I worked with, grabbed one of the 80-pound weights and leaped overboard. The lead bore him down like a millstone, and within five seconds after I had struck bottom, I saw his form looming up through the window.

Quicker than you take to read this sentence, he upturned the bell. This enabled me to slide out, and, with our lungs nearly bursting, we cracked through the surface a few seconds later where eager hands pulled us aboard the tender.

Recently in filming “Beneath the Sea” I had occasion to work with one of the largest photographic diving bells ever constructed for motion pictures. This bell, whose picture appears on these pages, was made of steel and stands seven feet, six inches high and measures nearly five feet in diameter. It will withstand water pressure at a depth of 180 feet, though this is four times deeper than I have ever filmed a human actor. Emergency flasks of oxygen stand ready for instant use in case the bell breaks from its cable and falls to the bottom of the sea.

Like all such modern contrivances, it carries a telephone and a microphone, in order that the voices of the actors may be recorded on the ship above. With a heavy flooring of lead, the bell weighs nearly two and a half tons. It rests in a frame of heavy steel straps.

Every time I descend from a ship in a bell, I think the fish below must be amused to see my legs dangling through the open bottom. You see, I sit on a saddle behind the camera, which is mounted on a bracket. Though my larger bell weighs, after the 80-pound lead weights are attached to the outside hooks, nearly two tons, I must keep my feet free to walk around the bottom.

Yes, sir! More than once I have walked along the floor of the Pacific with two tons of lead on my shoulders and my head in the big air bubble, which, by the way, helps support the great weight and makes such walking possible.

On one occasion I had descended off the California coast for a scene which required me to walk beneath the bell, photographing the side of a prop ship which had been planted there several days earlier. The set around which I was working demonstrated better than any on which I have worked beneath the Pacific just how elaborate an undersea scene may be made. For weeks prior to our arrival there, workmen had been fabricating the side of the ship, heavy concrete moulded into wire mesh, with enough steel and wood to hold it upright in a mild sea.

Near the center, below the water line, had been built a jagged hole, representing the results from a terrific impact. An actor was to crawl out of this hole, bearing with him treasure from the galleon.

I descended and focused on the hole, awaiting the actor. We were not more than 15 feet down at the time. Just at that moment a ground swell began to move inshore and, as I looked on in dismay, the set slowly toppled over, disintegrated and settled to the bottom.

Unfortunately the builders had not counted on the effect of salt water on the fastenings and had built the ship too quickly and of inferior materials. Fortunately, however, we had had seven days’ work on it already and scenes filmed earlier were made to answer the studio’s needs.

In filming scenes of people, fish and inanimate objects we never use lights. We are able, occasionally, to reflect sunlight onto our objectives. These are the ordinary brilliant reflectors, of silver or gold color, used in the studios and on location to bend light rays directly on the scene. Here, however, they are lowered on ropes and poles into the water.

Divers tell me, and I agree from long experience, that lights generally are unsuccessful under water for the reason that only lights of great power can be used and these become so hot that they quickly burn out.

I have tried to make my bells as livable as possible, for I spend many of my waking hours in them. Many days I spend five hours below water on my little seat, focusing on new scenes, changing magazines, swinging back and forth with the tides.

There in the dark I pan the camera around, tilt it up and down on its stationary tripod and otherwise handle it exactly as I would on a sound stage instead of in the depths of the world’s greatest stageâ€”the ocean.

Not only can I manipulate the camera easily, but with the help of people on deck can direct both people and fish. Human actors, of course, must be told before they dive overboard exactly what to do.

Oddly, as far as underwater direction is concerned, we can guide fish more easily than humans.

One afternoon I was dangling beneath the camera ship off the Cocos islands. We had been waiting several hours for fish. At last a big school of tuna appeared. Fred, on deck, warned me that we were easing in among the school.

“Okay,” I replied. “Throw chums over the right side of the bell.”

In a moment I saw the fish move in that direction. As soon as none remained within my vision I reported.

“They’re off my starboard beam,” I said into the ‘phone. “Toss chums in on my left and 20 feet in front.”

I started the camera, knowing I soon would have a swell picture. There they came, these race horses of the sea, dashing to the meal as they would attack fiercely anything that might stand in their paths.

And all I did was speak into a telephone, turn the switch that started the camera motor turning, and sit with my eye tight against the finder, hoping to keep the camera in focus.

Oddly, objects are magnified under the water and an actor not infrequently dodges fish that look to him as though they are about to snap at his nose. One morning we had a boy doubling for the star. He was supposed to gather up prop jewels and gold from a chest. Before he went down we had “pepped” him up a bit, telling him of the prevalence of sharks.

I had the camera rolling and he was ready to stoop down to the chest when two sea bass swam up expressing mild curiosity. The youth probably thought they were sharks, for they do resemble English bulldogs. Five times he backed around the chest, trying to beat them off when, in fact, neither was closer than three feet to his face. I literally was in spasms, though he, poor fellow, thought his life was threatened. The picture was a scream, though obviously it never reached a theatre.

I have seen many sharks, but never have seen one attack a man. In those rare cases where sharks attack humans, I’m sure the attack results from the flashing of the light flesh in the water. Nor will an octopus under ordinary circumstances rush to attack. I’ve filmed a dozen, some of them held in place by invisible wires; and every time an octopus is given his head, he makes off for parts unknown. Naturally actors are shy of the octopus, for they are formidable in appearance.

Some day I hope to get a good picture of an octopus shooting out his dark, protective liquid screen. To date, these thrilling episodes have taken place so close to my camera that the liquid obscures the entire scene. If an octopus would perform 30 feet from the bell, I’ll guarantee to produce one of the most interesting shots ever to reach the screen.