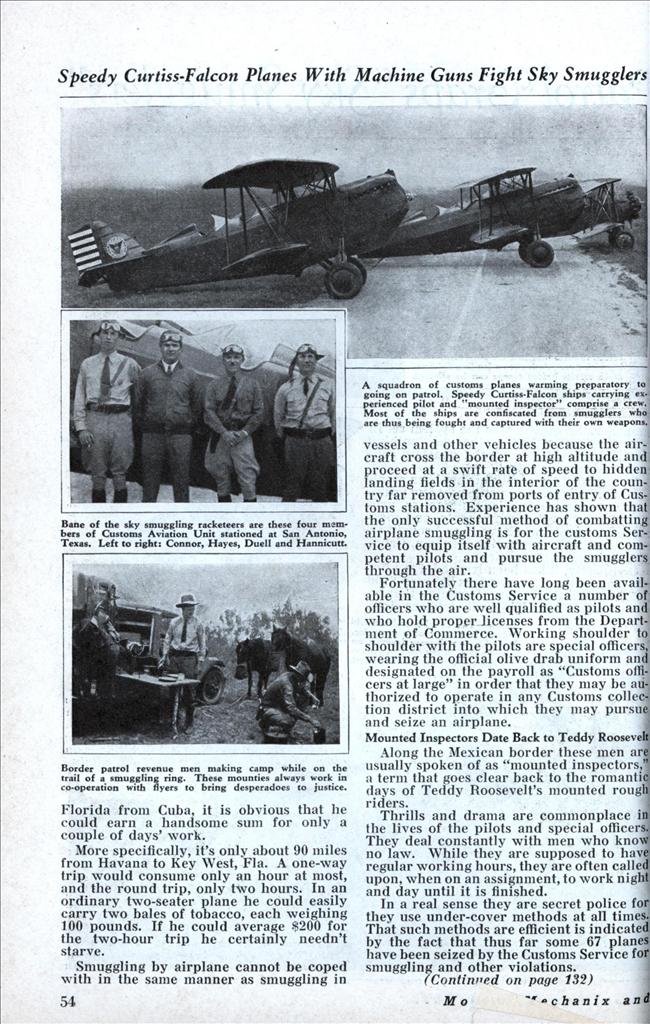 Customs Bureau Men, perplexed by the flood of narcotics, precious stones and undesirable aliens pouring across our borders, have now traced the contraband goods to their sources—”sky smugglers.” How Uncle Sam’s new aerial border patrolmen hunt down these outlaws with ingenious aerial strategy is told in this story of gripping aeronautical adventure.

FIVE thousand feet above the arid Texas-Mexican border an airplane speeds on a secret, illicit mission. Traveling well over 150 miles per hour the craft maintains its speed until about three miles west of Poteet, Texas.

At this point the pilot, evidently intending to land, slants the nose of his ship earthward, losing about a thousand feet. But suddenly another plane swoops down out of the heavens, diving straight at the first plane. On its tail is the insignia of the U. S. Customs bureau.

Immediately the chase is on. There begins a series of aerial maneuvers closely resembling the “hide and seek” combat maneuvers of the World War.

The pilot of the pursued plane puts his ship through a series of thrilling maneuvers. Diving and twisting and spinning, he finally succeeds in breaking away from the plane with Uncle Sam’s insignia on its tail and gaining a strategic point in the sky.

But not for long. Within ten minutes the pursuit ship, armed with a machine gun and. manned by two men in uniform, achieves a position alongside.

Then, pointing to the insignia on his plane the pilot of the government ship signals the pilot of the pursued plane to make an immediate landing. This order is obeyed, and a few minutes later both planes are on the ground.

Thus finally, after a sensational 200-mile chase, and without a single shot being fired, a “sky smuggler” is caught, forced to land and arrested by aerial patrolmen of the United States Customs Bureau.

Episodes like this are enacted daily along both the Canadian and Mexican border since Uncle Sam launched, about a year ago, his latest system for fighting the sky smuggler. So quietly was the system set in operation that, until the other day, nothing had leaked out from official quarters concerning the new patrol.

Smuggling through the air has been greatly on the increase during the past few years. Liquor, undesirable aliens, narcotics, precious stones, watch movements, and merchandise of all sorts have been brought in on a large scale across the Mexican, Canadian and maritime borders.

Ordinarily, it has been learned, the pilot of a smuggling plane averages between $100 to $200 for a single trip. Assuming that he were smuggling high-grade tobacco into Florida from Cuba, it is obvious that he could earn a handsome sum for only a couple of days’ work.

More specifically, it’s only about 90 miles from Havana to Key West, Fla. A one-way trip would consume only an hour at most, and the round trip, only two hours. In an ordinary two-seater plane he could easily carry two bales of tobacco, each weighing 100 pounds. If he could average $200 for the two-hour trip he certainly needn’t starve.

Smuggling by airplane cannot be coped with in the same manner as smuggling in vessels and other vehicles because the aircraft cross the border at high altitude and proceed at a swift rate of speed to hidden landing fields in the interior of the country far removed from ports of entry of Customs stations. Experience has shown that the only successful method of combatting airplane smuggling is for the customs Service to equip itself with aircraft and competent pilots and pursue the smugglers through the air.

Fortunately there have long been available in the Customs Service a number of officers who are well qualified as pilots and who hold proper licenses from the Department of Commerce. Working shoulder to shoulder with the pilots are special officers, wearing the official olive drab uniform and designated on the payroll as “Customs officers at large” in order that they may be authorized to operate in any Customs collection district into which they may pursue and seize an airplane.

Along the Mexican border these men are usually spoken of as “mounted inspectors,” a term that goes clear back to the romantic days of Teddy Roosevelt’s mounted rough riders.

Thrills and drama are commonplace in the lives of the pilots and special officers. They deal constantly with men who know no law. While they are supposed to have regular working hours, they are often called upon, when on an assignment, to work night and day until it is finished.

In a real sense they are secret police for they use under-cover methods at all times. That such methods are efficient is indicated by the fact that thus far some 67 planes have been seized by the Customs Service for smuggling and other violations.

One of the most perplexing problems that ever confronted the sleuths of the aerial patrol existed a couple of months ago along the Canadian border near Buffalo. Again and again they had been positively informed that large-scale liquor smuggling was being conducted with the Canadian base of operations near St. Catherines, Ontario, and the American base, an improvised landing field near Lockport, New York, just outside of Buffalo.

Every attempt to catch the offenders had failed. Finally, however, an informer stationed near the Lockport field came upon some information that helped the Federal officers perform an ingenious bit of strategy.

How Liquor Smugglers Were Trapped.

It seems that the pilot of the plane carrying the smuggled Canadian liquor would never land his illicit cargo unless two men wearing white sweaters were standing in the center of the field. If these men weren’t present he’d know that something was wrong—perhaps Federal men were on hand—and would circle around the field until the proper signal was given and he had the assurance the coast was clear.

Immediately on learning this fact two Customs patrolmen drove to a point near the landing field and hid themselves and their car in the surrounding bushes. After a couple of hours wait they saw an expensive car drive onto the field. Sure enough, two men, both wearing white sweaters, got out. Pistol in hand the officers marched on the field and apprehended the men. Stripping them of the white sweaters the officers themselves put on the sweaters, forcing the men to hide in the nearby bushes.

Pretty soon there was the characteristic whir of an airplane motor overhead. The pilot circled the field very cautiously, obviously to make sure his white-sweatered confederates were on hand. Not being able to make out the features of the white-clad sleuths, he evidently decided the coast was clear, and landed. The sleuths placed him under arrest after finding in his plane a huge cargo of liquor.

The saddest part of the incident was revealed by the pilot. He said that when first offered the smuggling job he had purchased the plane on the installment plan—$1,000 down and $100 after each trip. This last trip, he explained, was the very first in which he was supposed to make a clear profit, although he had made 30 previous trips. This added information, however, did not soften the hearts of the Yankee sleuths. They confiscated the plane and penalized the pilot $1,000. He is now back in his native Canada and isn’t expected to visit the United States very soon.

Such episodes are commonplace in the life of Uncle Sam’s aerial patrolmen. Like the Northwest Canadian Mounted, they always get their men, even though the mission brings them face to face with death.