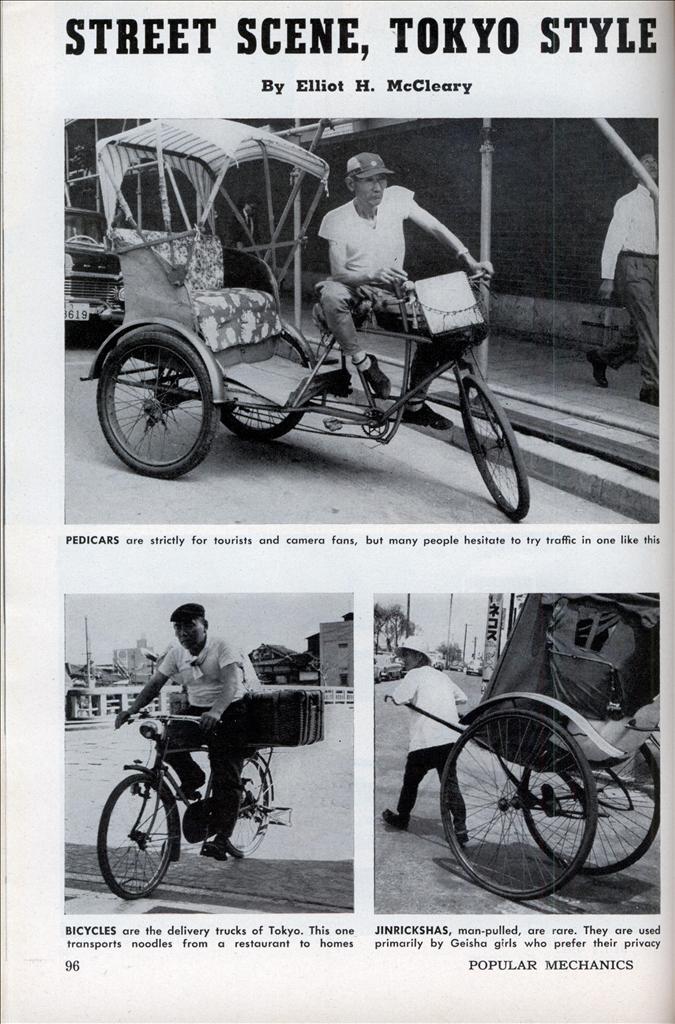 TRAFFIC IN TOKYO, the world’s largest city (population: 10 million), is, to put it mildly, dense, wild, fast, and furious.

The very diversity of vehicles, as well as their number, is startling. There are automobiles of varying shapes and sizes— Japanese, French, German, an occasional, looming Chevy or Plymouth.

Coveys of goggled motorcyclists thunder their motors at intersections, roar away in blue smoke when the light changes. There are three-wheeled trucks guided inside by handle bars. There are sleek cabs dashing in and out of openings in the traffic, scattering the pedestrians who stream in thousands across intersections, or walk right in the street in the majority of byways which have no sidewalks.

To add to the confusion and excitement of Tokyo driving (which, by the way, proceeds down the left side of the street) there are messengers on bicycles wheeling in and around the cars, laundrymen with huge bundles behind them, repairmen with ladders and tools mounted on bicycle sidecars and trailers, and white-capped restaurant delivery boys—some balancing trays on which are bowls of fish, rice or fuming tea.

All this activity is more amazing when you consider that cars are a luxury in a land where the average workman makes less than $100 a month. Also the Japanese auto industry turns out less than 500,000 four-wheeled motor vehicles a year and less than 200,000 of these are passenger cars. But Tokyo alone has 400,000 cars and trucks on its streets, with 3000 being added every month.

Traffic is further congested by the national output of a million and a half motor bikes and mtorcycles and 300,000 three-wheelers a year. The city government cannot keep up with the demand for better streets and more sidewalks which are desperately needed to curb the rate of 14,000 accidents per year.

Something will have to be done, muse the city fathers while they appropriate more money for traffic policemen, street lights, and an expressway.

But like their counterparts in the United States, they may be unable to solve a modern mystery: Why does a mild-mannered average man suddenly become an avenging warrior when he gets behind the wheel of his Datsun?