Make posted a few articles on solar furnaces yesterday. (link, link) Here’s a companion peice from 1954 with a few that get up to 8,000 degrees F. I particularly like the solar cigarette lighter on page two. 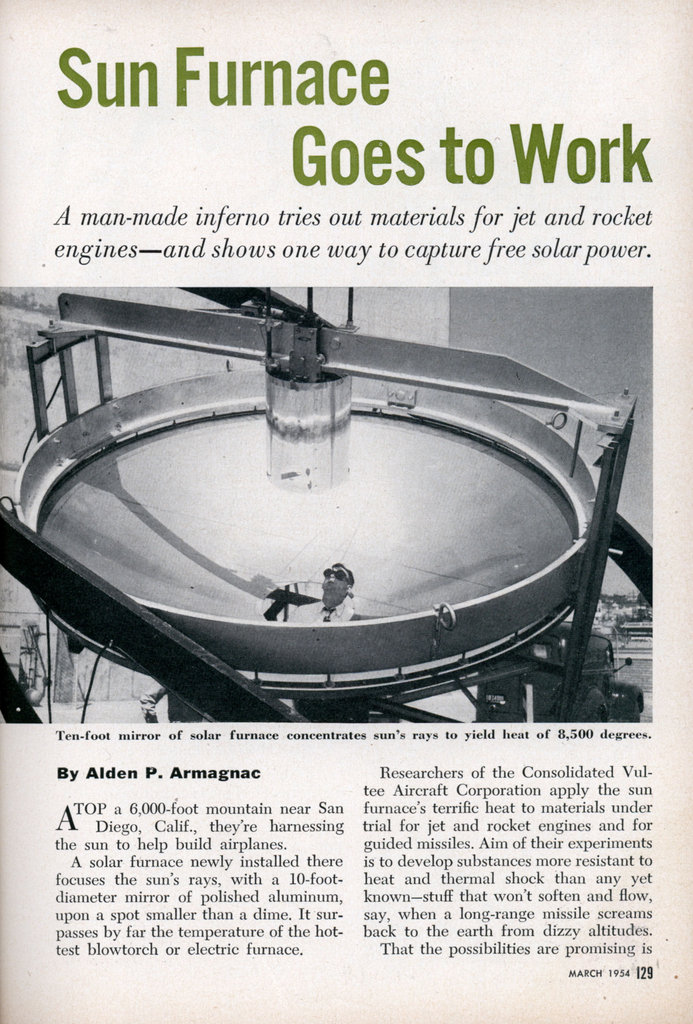 ATOP a 6,000-foot mountain near San Diego, Calif., they’re harnessing the sun to help build airplanes. A solar furnace newly installed there focuses the sun’s rays, with a 10-foot-diameter mirror of polished aluminum, upon a spot smaller than a dime. It surpasses by far the temperature of the hottest blowtorch or electric furnace.

Researchers of the Consolidated Vultee Aircraft Corporation apply the sun furnace’s terrific heat to materials under trial for jet and rocket engines and for guided missiles. Aim of their experiments is to develop substances more resistant to heat and thermal shock than any yet knownâ€”stuff that won’t soften and flow, say, when a long-range missile screams back to the earth from dizzy altitudes.

That the possibilities are promising is shown by recent discovery of two super-refractories, hafnium carbide and tantalum carbide, with fantastically high melting pointsâ€”7,530 and 7,020 degrees F., respectively. The first looks like the record for any substance known. For comparison, iron melts at a mere 2,800 degrees, and tungsten tops the list of metals at 6,100 degrees; while graphite, long the supreme heat-resisting material, turns from solid into vapor at about 6,600 degrees.

The California experimenters’ solar furnace, essentially, an enormous burning glass, provides the most practicable way to explore this newly opening extreme-high-temperature realm. When sky conditions are ideal, it yields an estimated maximum of 8,500 degrees F. At the focus of the great mirror, this heat is concentrated in a spot 5/16 of an inch in diameter.

Its intensity burns a hole in firebrick with ease. Steel melts and drips like sealing wax over a flame, when a rod is held with its tip at the focal point. A movable cylindrical sunshade controls the temperature of thousands of degrees to within a degree or two, a triumph of precision. Equipped with an astronomical drive, the big mirror turns automatically to follow the sun, permitting experiments of hours duration.

Best of all pure samples of materials can be subjected to the searing heat without contamination by foreign substances, like carbon in electric furnaces. And there are no electric and magnetic fields, nor fumes, to disturb reactions or hinder spectroscopic observation.

In going to work for industry, the solar furnace has exchanged academic robes for overalls. For its advantages long were appreciated only by savants of pure science. Lavoisier and other great chemists of the past melted metals with solar furnaces, which made up in size whatever their lenses or mirrors lacked in optical perfection. Then the idea seems to have been forgotten, until recent years.

Abroad, French experiments that began a few years ago with a 78-inch searchlight mirror (PSM, Aug. ’50, p. 122) have now led to what is probably the world’s largest solar furnace. Using a 40-foot-diameter composite mirror, a mosaic of small panes of window glass, this semi-industrial installation in the Pyrenees went into operation in 1952.

In this country, first practical use of a solar furnace appears to date back only a little earlier, to a little-known project of World War II. A 120-inch sun furnace was built for the AC Spark Plug Division of General Motors at Flint, Mich., with the cooperation of the Aluminum Company of America. Originally 16 reflecting sectors of quarter-inch sheet aluminum gave it a sa