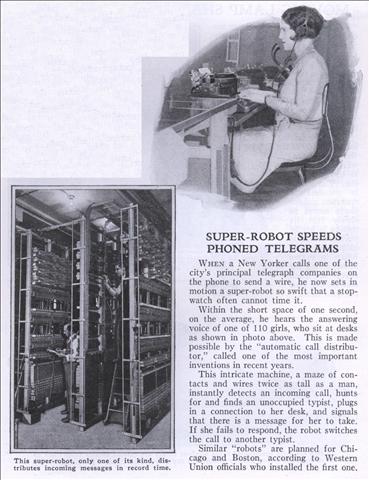 When a New Yorker calls one of the city’s principal telegraph companies on the phone to send a wire, he now sets in motion a super-robot so swift that a stopwatch often cannot time it.

Within the short space of one second, on the average, he hears the answering voice of one of 110 girls, who sit at desks as shown in photo above. This is made possible by the “automatic call distributor, ” called one of the most important inventions in recent years.

This intricate machine, a maze of contacts and wires twice as tall as a man, instantly detects an incoming call, hunts for and finds an unoccupied typist, plugs in a connection to her desk, and signals that there is a message for her to take. If she fails to respond, the robot switches the call to another typist.

Similar “robots” are planned for Chicago and Boston, according to Western Union officials who installed the first one.