I grew up right near this building and it really is quite massive. It is now one of UPS’s main hubs in Manhattan. 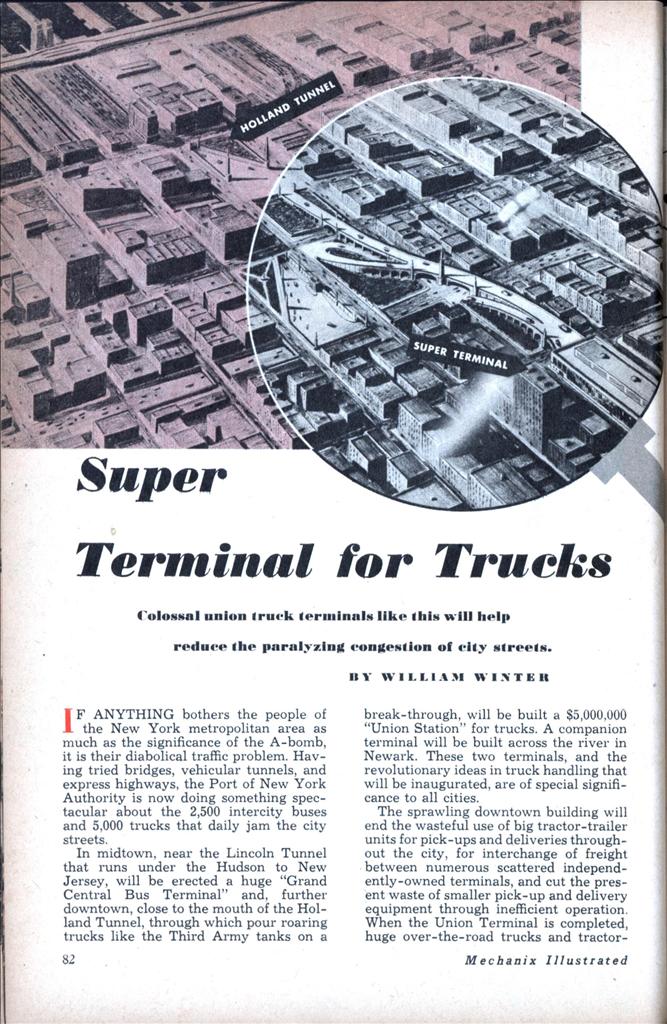 Colossal union truck terminals like this will help reduce the paralyzing congestion of city streets.

IF ANYTHING bothers the people of the New York metropolitan area as much as the significance of the A-bomb, it is their diabolical traffic problem. Having tried bridges, vehicular tunnels, and express highways, the Port of New York Authority is now doing something spectacular about the 2,500 intercity buses and 5,000 trucks that daily jam the city streets.

In midtown, near the Lincoln Tunnel that runs under the Hudson to New Jersey, will be erected a huge “Grand Central Bus Terminal” and, further downtown, close to the mouth of the Holland Tunnel, through which pour roaring trucks like the Third Army tanks on a break-through, will be built a $5,000,000 “Union Station” for trucks. A companion terminal will be built across the river in Newark. These two terminals, and the revolutionary ideas in truck handling that will be inaugurated, are of special significance to all cities.

The sprawling downtown building will end the wasteful use of big tractor-trailer units for pick-ups and deliveries throughout the city, for interchange of freight between numerous scattered independently-owned terminals, and cut the present waste of smaller pick-up and delivery equipment through inefficient operation. When the Union Terminal is completed, huge over-the-road trucks and tractor- trailer equipment will funnel into the terminal, and pick-up and delivery will be performed by “mosquito fleets” of small trucks. The mosquito-fleet operators will be assigned one or more of 36 “P and D” zones.

These truck terminals are no run-of-the-mill affairs. The fact that two-thirds of the merchandise freight that comes into New York each day arrives in trucks, means that the transportation experts have gone all out in the design of the New York and Newark terminals. They are the first of a series.

Located between Washington and Greenwich Streets, on New York’s lower west side, and extending in a single unit from Spring Street, at the Holland Tunnel, three blocks north to West Houston Street, the New York terminal is 1,000 feet long and 160 feet wide. This happens to be 200 feet longer than a monster plant like Republic Aviation.

The terminal looks very much like a modern factory. Its roof will accommodate possible helicopter cargo pick-up and delivery—a Bell helicopter already has made a demonstration delivery to the site—as well as parking place for 70 complete tractor-trailer units. Instead of blocking surrounding streets, waiting trucking will be parked on the roof.

Along the sides of the terminal will be bays for 144 trucks (80 over-the-road, 56 local, and eight for expansion). Running almost the entire length of the building at its center will be an 800×80-foot island or platform equipped with an overhead conveyor. Small trailers with telescoping masts can be quickly attached or removed from the conveyor. Continuously moving at the rate of 100 feet per minute, the conveyor travels down one side of the island, crosses at the end, then goes up the other side and around the end to complete the circle. In one revolution, the conveyor will handle as much as 80 tons of freight. It is an interesting fact that the conveyor is actuated by a single variable-speed five-hp electric motor. If it proves possible to handle freight at a faster clip, the speed of the conveyor can be stepped up. A transverse crane at one end of the platform will provide means to lift across the island weights up to 10 tons. When the trucks are backed to the platform they will stand entirely within the building line.

Under the present system, or lack of system, big tractor-trailers frequently pick up or deliver shipments at from six to 12 widely-scattered addresses. A freight shipment through New York involves five separate loadings and unloadings just to be transferred from one over-the-road carrier to another for delivery beyond the city.

Like a city in itself, the terminal contains two floors of offices which will be rented to tenant carriers, mosquito fleet operator’s, local truckmen, and allied business firms. There will be facilities for banking, doctor’s quarters, a restaurant, locker and shower rooms, meeting rooms, drivers’ call rooms, and conference rooms. To step up efficiency there will be a pneumatic tube communicating system, an inter-office communicating system, and an automatic electric-eye method of checking the flow of parcels through the terminal.

Handling a capacity of 2,000 tons daily, the New York terminal will be of prime importance in reducing the numbers of trucks on the streets. The Newark terminal (the biggest in the world), 1,200 feet long, with a capacity of 2,500 tons, is expected to save up to $432,000 in truck transport costs each year.

City fathers and truckers from coast to coast are keeping a thoughtful eye on the Port of New York Authority’s offensive on the world’s number one traffic jam. •