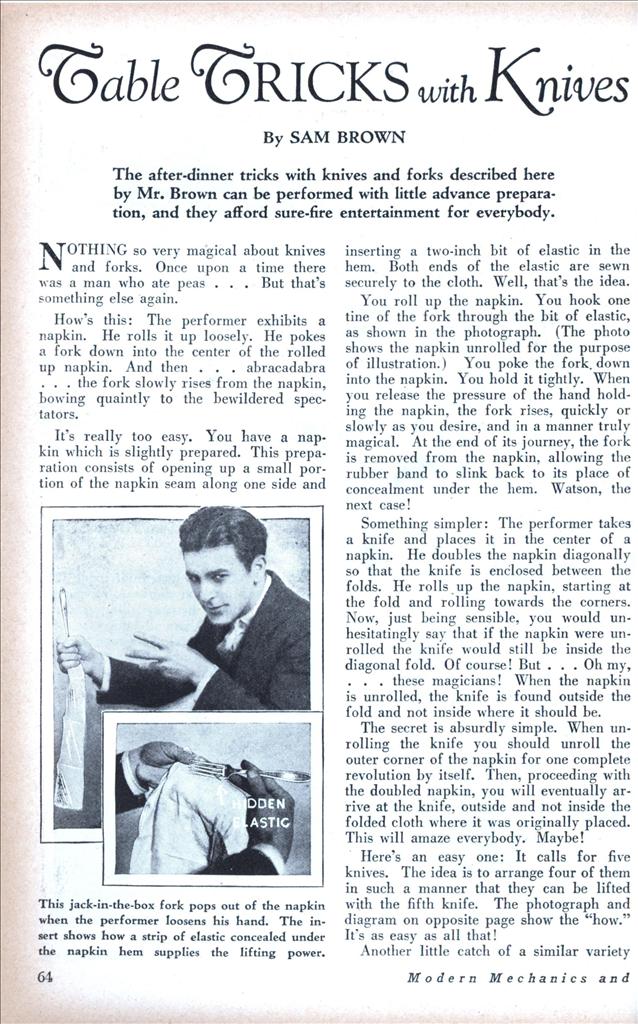 The after-dinner tricks with knives and forks described here by Mr. Brown can be performed with little advance preparation, and they afford sure-fire entertainment for everybody.

NOTHING so very magical about knives and forks. Once upon a time there was a man who ate peas . . . But that’s something else again.

How’s this: The performer exhibits a napkin. He rolls it up loosely. He pokes a fork down into the center of the rolled up napkin. And then . . . abracadabra . . . the fork slowly rises from the napkin, bowing quaintly to the bewildered spectators.

It’s really too easy. You have a napkin which is slightly prepared. This preparation consists of opening up a small portion of the napkin seam along one side and inserting a two-inch bit of elastic in the hem. Both ends of the elastic are sewn securely to the cloth. Well, that’s the idea.

You roll up the napkin. You hook one tine of the fork through the bit of elastic, as shown in the photograph. (The photo shows the napkin unrolled for the purpose of illustration.) You poke the fork, down into the napkin. You hold it tightly. When you release the pressure of the hand holding the napkin, the fork rises, quickly or slowly as you desire, and in a manner truly magical. At the end of its journey, the fork is removed from the napkin, allowing the rubber band to slink back to its place of concealment under the hem. Watson, the next case!

Something simpler: The performer takes a knife and places it in the center of a napkin. He doubles the napkin diagonally so that the knife is enclosed between the folds. He rolls up the napkin, starting at the fold and rolling towards the corners. Now, just being sensible, you would unhesitatingly say that if the napkin were unrolled the knife would still be inside the diagonal fold. Of course! But . . . Oh my, . . . these magicians! When the napkin is unrolled, the knife is found outside the fold and not inside where it should be.

The secret is absurdly simple. When unrolling the knife you should unroll the outer corner of the napkin for one complete revolution by itself. Then, proceeding with the doubled napkin, you will eventually arrive at the knife, outside and not inside the folded cloth where it was originally placed. This will amaze everybody. Maybe!

Here’s an easy one: It calls for five knives. The idea is to arrange four of them in such a manner that they can be lifted with the fifth knife. The photograph and diagram on opposite page show the “how.” It’s as easy as all that!

Another little catch of a similar variety consists of arranging three tumblers in triangular formation and bridging them with three knives. A condition of the construction is that each knife must rest upon one tumbler only, and at one point. The bridge when finished must be firm enough to sustain a fairly heavy weight—say, a plate of the wife’s best biscuits. The marvelous bit of structural engineering is fully explained by the photograph.

The solution of this excellent little effect lies in one deft movement of the right hand which can be easily mastered by anyone. To commence, dab on the three squares of paper to either side of the knife. Now, holding the knife in your right hand, remove one of the small squares, the tip one, with your left forefinger. The second move is to apparently turn the knife over and remove the corresponding square from the opposite side of the blade. What you do, however, is something entirely different— you turn the knife completely over, immediately brushing your finger over the empty space on the knife from which you have previously removed the paper square.

The “deft movement” before referred to has to do with this complete turn of the knife so that it will appear to the spectator as if the knife were but turned half way over. To do it you hold the knife in your right hand, as shown in the first photograph, palm up, thumb on the side of the knife handle. Now . . . take a knife in your hand and go through this slowly . . . if you will twist your thumb over, you can give the knife a half turn, as shown in the second- photo. You will also find that if you turn your hand over so that it is palm down, you can give the knife an additional half turn, thereby making a complete revolution of the knife although the two movements, blended together with a little flourish of the hand, seem to be but the natural movement required to turn the blade over.

After making the complete revolution, the forefinger of the left hand immediately strokes the knife blade as if removing a square of paper. The second square of paper is then removed and the knife again turned completely over by reversing the movement—a pull with the thumb and a turn of the hand—and the forefinger again pounces down on the knife and brushes away an imaginary slip of paper.

Do you get it? It really is one of the most excellent bits of magic in existence, and not at all as difficult as all this haranguing would seem to indicate. Try it!

An Amazing Sound Trick This one has to do with “acoustics.” Don’t let the subject stop you . . . it’s only Greek for playing the fool with sound. The performer places two tumblers on the table. He picks up a fork. He plucks the prongs of the fork with his fingers so that it gives out a sound, and after the sound has died away, he proceeds to pick it out of the air again and throw it into first one tumbler and then the other.

The whole basis of the thing is that the fork continues to “ring” for some time after the sound has apparently stopped, but inaudibly. If the butt end of the fork is gently touched to a solid object, however, the sound will at once become audible again, and the note given off in consequence is, by association of ideas, at once attributed to the glass. In an old form of this excellent trick, it was customary to touch the butt end of the fork to the table top. A great improvement in the tone of the notes can be effected by concealing a small matchbox in your hand, as shown in the photograph, and using this as a sound box. The fork is held clear of the box until the initial note has died away, and then touched lightly to the box for the “plucked” notes which appear to come from the glasses.

This is the big, knife-swallowing act! The performer takes an ordinary table knife and rolls it in a napkin. Then, holding the end of the napkin to his mouth, he taps the opposite end gently and lets the knife slip down his throat. Right down! And then … a reproduction from the region of the vest line . . . and there you are!

It’s all very simple. The trick is performed at a table. The wrapping of the knife and all that is fair enough, but just before the knife is carried to the mouth, there is a brief moment when the mouth of the napkin is below the table top, and in that fraction of a second the knife is allowed to slip out and fall to the performer’s knees, as shown in the photograph.

The swallowing then takes place, ending with the complete crushing of the napkin to show that the knife is “all gone.” While the masticating process is going on . . . steel is “rawther” difficult, you know . . . the performer is cautiously busy with the task of pushing the knife up under his vest so that it can be later removed from the region of the middle button hole.