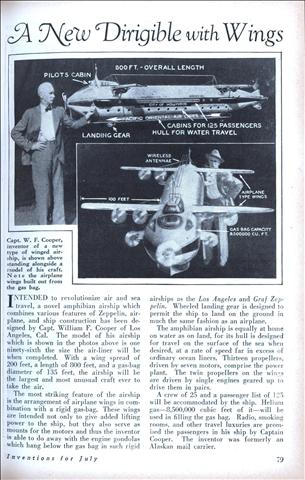 A New Dirigible with Wings

INTENDED to revolutionize air and sea travel, a novel amphibian airship which combines various features of Zeppelin, airplane, and ship construction has been designed by Capt. William F. Cooper of Los Angeles, Cal. The model of his airship which is shown in the photos above is one ninety-sixth the size the air-liner will be when completed. With a wing spread of 200 feet, a length of 800 feet, and a gas-bag diameter of 135 feet, the airship will be the largest and most unusual craft ever to take the air. 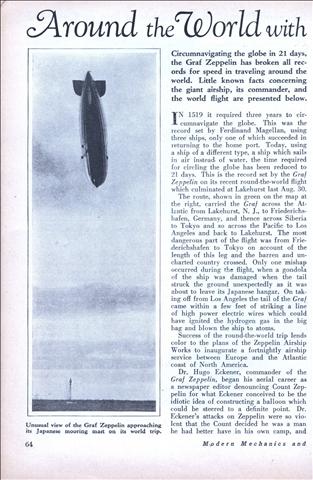 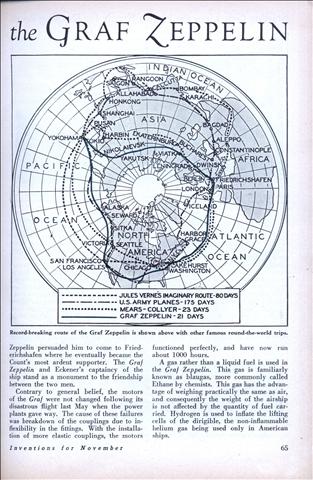 Around the World with the Graf Zeppelin

Circumnavigating the globe in 21 days, the Graf Zeppelin has broken all records for speed in traveling around the world. Little known facts concerning the giant airship, its commander, and the world flight are presented below. 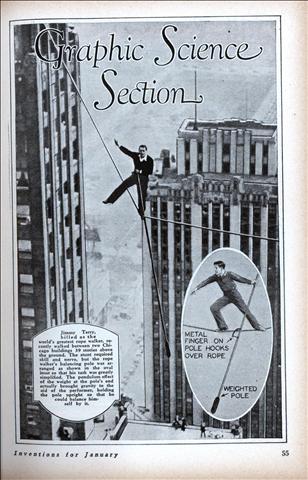 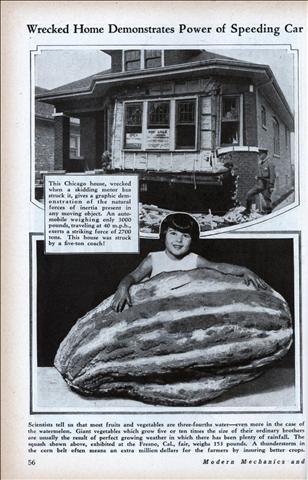 Jimmy Terry, billed as the world’s greatest rope walker, recently walked between two Chicago buildings 39 stories above the ground. The stunt required skill and nerve, but the rope walker’s balancing pole was arranged as shown in the oval inset so that his task was greatly simplified. The pendulum effect of the weight at the pole’s end actually brought gravity to the aid of the performer, holding the pole upright so that he could balance himself by it. 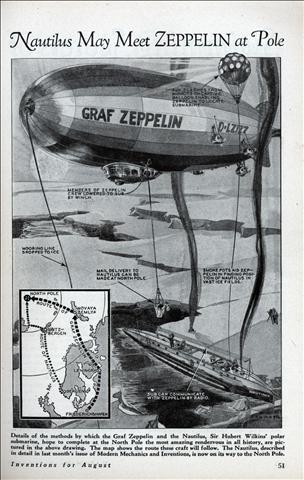 Nautilus May Meet Zeppelin at Pole
Details of the methods by which the Graf Zeppelin and the Nautilus, Sir Hubert Wilkins’ polar submarine, hope to complete at the North Pole the most amazing rendezvous in all history, are pictured in the above drawing. The map shows the route these craft will follow. The Nautilus, described in detail in last month’s issue of Modern Mechanics and Inventions, is now on its way to the North Pole. 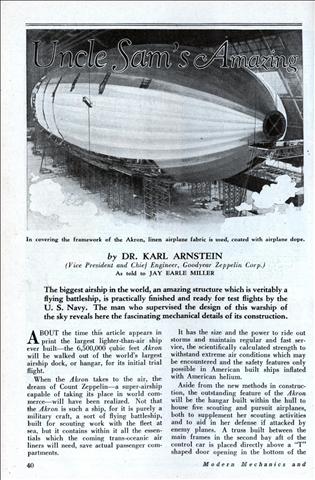 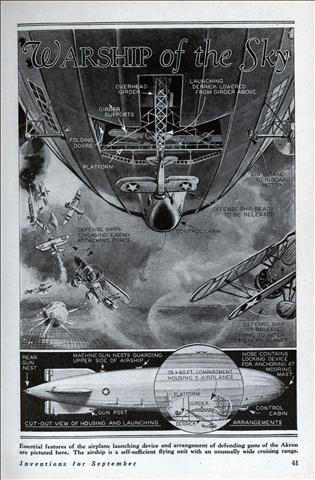 The biggest airship in the world, an amazing structure which is veritably a flying battleship, is practically finished and ready for test flights by the U. S. Navy, The man who supervised the design of this warship of the sky reveals here the fascinating mechanical details of its construction.

ABOUT the time this article appears in print the largest lighter-than-air ship ever built—the 6,500,000 cubic feet Akron will be walked out of the world’s largest airship dock, or hangar, for its initial trial flight.

When the Akron takes to the air, the dream of Count Zeppelin—a super-airship capable of taking its place in world commerce—will have been realized. Not that the Akron is such a ship, for it is purely a military craft, a sort of flying battleship, built for scouting work with the fleet at sea, but it contains within it all the essentials which the coming trans-oceanic air liners will need, save actual passenger compartments. 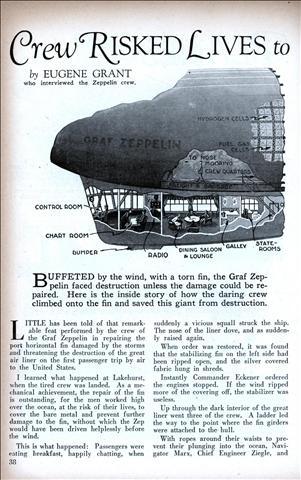 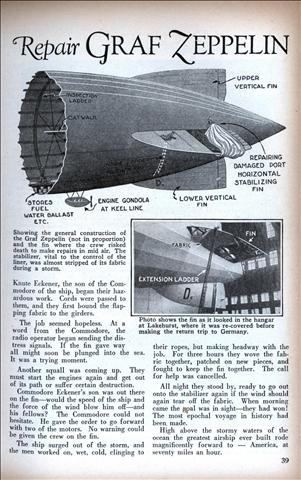 by EUGENE GRANT who interviewed the Zeppelin crew.

BUFFETED by the wind, with a torn fin, the Graf Zeppelin faced destruction unless the damage could be repaired. Here is the inside story of how the daring crew climbed onto the fin and saved this giant from destruction.

LITTLE has been told of that remarkable feat performed by the crew of the Graf Zeppelin in repairing the port horizontal fin damaged by the storms and threatening the destruction of the great air liner on the first passenger trip by air to the United States.

THE AERIAL NEMESIS OF SUBMARINES (Jun, 1917) 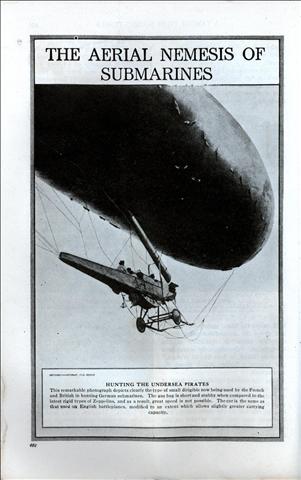 THE AERIAL NEMESIS OF SUBMARINES

This remarkable photograph depicts clearly the type of small dirigible now being used by the French and British in hunting German submarines. The gas bag is short and stubby when compared to the latest rigid types of Zeppelins, and as a result, great speed is not possible. The car is the same as that used on English battleplanes, modified to an extent which allows slightly greater carrying
capacity. 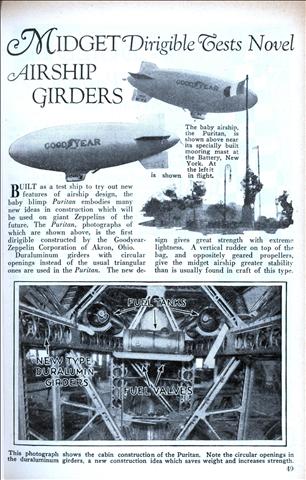 BUILT as a test ship to try out new features of airship design, the baby blimp Puritan embodies many new ideas in construction which will be used on giant Zeppelins of the future. The Puritan, photographs of which are shown above, is the first dirigible constructed by the Goodyear-Zeppelin Corporation of Akron, Ohio. 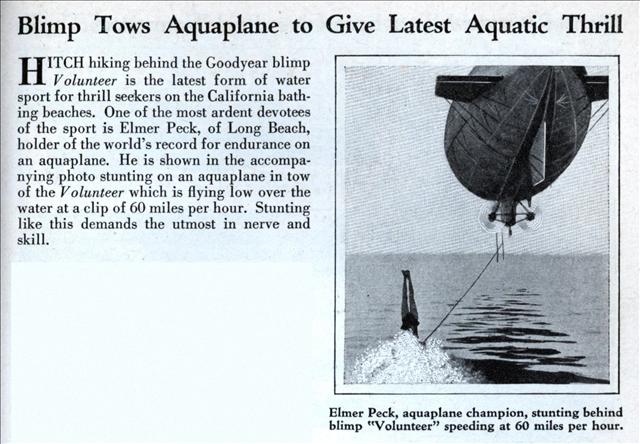 Blimp Tows Aquaplane to Give Latest Aquatic Thrill
HITCH hiking behind the Goodyear blimp Volunteer is the latest form of water sport for thrill seekers on the California bathing beaches. One of the most ardent devotees of the sport is Elmer Peck, of Long Beach, holder of the world’s record for endurance on an aquaplane. He is shown in the accompanying photo stunting on an aquaplane in tow of the Volunteer which is flying low over the water at a clip of 60 miles per hour. Stunting like this demands the utmost in nerve and skill. 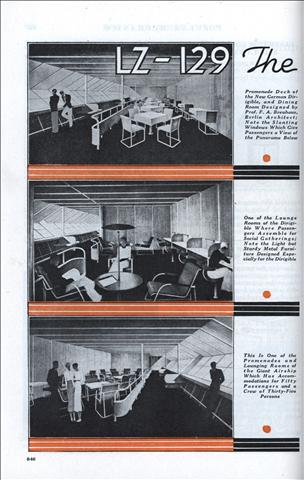 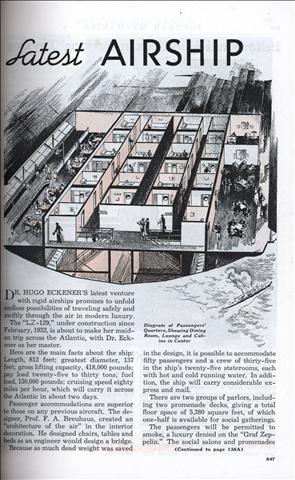 The “LZ-129,” under construction since February, 1932, is about to make her maiden trip across the Atlantic, with Dr. Eckener as her master.

Here are the main facts about the ship: Length, 812 feet; greatest diameter, 137 feet; gross lifting capacity, 418,000 pounds; pay load twenty-five to thirty tons; fuel load, 130,000 pounds; cruising speed eighty miles per hour, which will carry it across the Atlantic in about two days.