Modern Mechanix
Issue: Aug, 1937
Posted in: Aviation
Tags: airships
1 Comment on 36 Killed on the “Hindenburg” But Records Prove That Zeppelins Are Safe (Aug, 1937)

36 Killed on the “Hindenburg” But Records Prove That Zeppelins Are Safe (Aug, 1937) 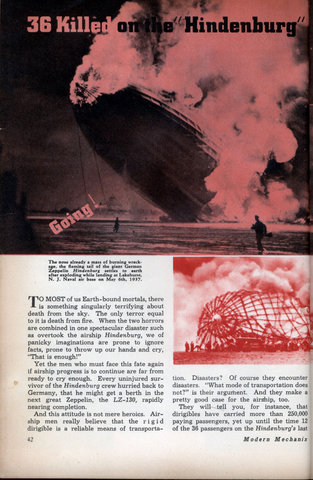 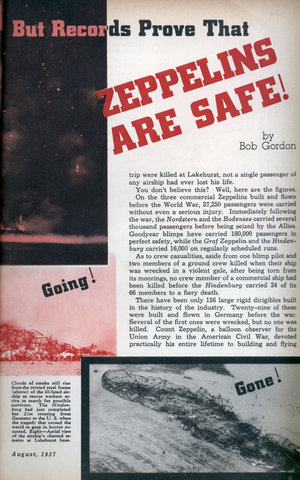 TO MOST of us Earth-bound mortals, there is something singularly terrifying about death from the sky. The only terror equal to it is death from fire. When the two horrors are combined in one spectacular disaster such as overtook the airship Hindenburg, we of panicky imaginations are prone to ignore facts, prone to throw up our hands and cry, “That is enough!”

Yet the men who must face this fate again if airship progress is to continue are far from ready to cry enough. Every uninjured survivor of the Hindenburg crew hurried back to Germany, that he might get a berth in the next great Zeppelin, the LZ-130, rapidly nearing completion. 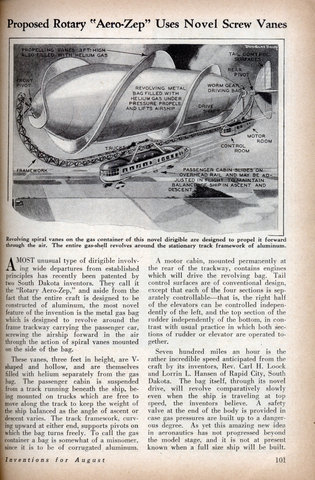 A MOST unusual type of dirigible involving wide departures from established principles has recently been patented by two South Dakota inventors. They call it the “Rotary Aero-Zep,” and aside from the fact that the entire craft is designed to be constructed of aluminum, the most novel feature of the invention is the metal gas bag which is designed to revolve around the frame trackway carrying the passenger car, screwing the airship forward in the air through the action of spiral vanes mounted on the side of the bag.

Nope, nothing scary here. Who would have a problem hanging out in a tin can being dangled a few thousand feet below a blimp? I’m not really sure what the propeller is supposed to do. Are they saying there is actually an engine in the capsule? 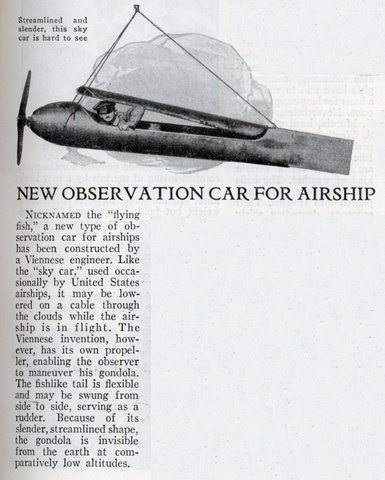 NEW OBSERVATION CAR FOR AIRSHIP
Nicknamed the “flying fish,” a new type of observation car for airships has been constructed by a Viennese engineer. Like the “sky car,” used occasionally by United States airships, it may be lowered on a cable through the clouds while the airship is in flight. The Viennese invention, however, has its own propeller, enabling the observer to maneuver his gondola. The fishlike tail is flexible and may be swung from side to side, serving as a rudder. Because of its slender, streamlined shape, the gondola is invisible from the earth at comparatively low altitudes. 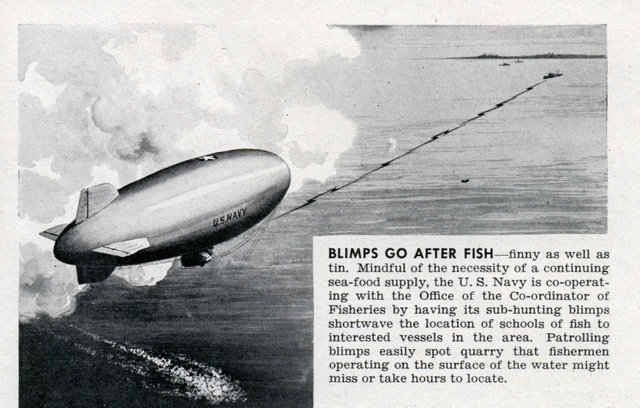 BLIMPS GO AFTER FISHâ€”finny as well as tin. Mindful of the necessity of a continuing sea-food supply, the U. S. Navy is co-operating with the Office of the Co-ordinator of Fisheries by having its sub-hunting blimps shortwave the location of schools of fish to interested vessels in the area. Patrolling blimps easily spot quarry that fishermen operating on the surface of the water might miss or take hours to locate. 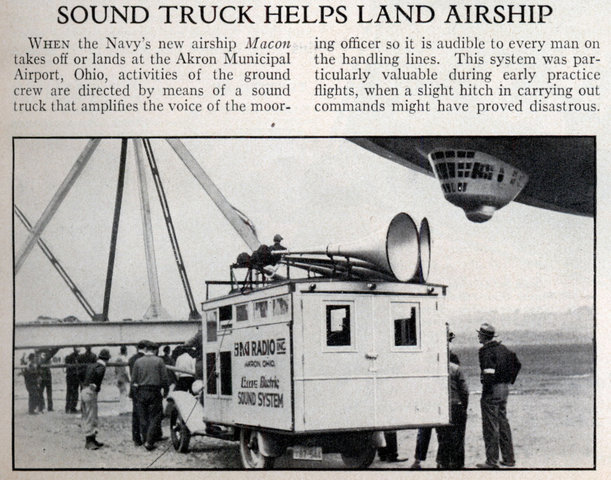 SOUND TRUCK HELPS LAND AIRSHIP
When the Navy’s new airship Macon takes off or lands at the Akron Municipal Airport, Ohio, activities of the ground crew are directed by means of a sound truck that amplifies the voice of the mooring officer so it is audible to every man on the handling lines. This system was particularly valuable during early practice flights, when a slight hitch in carrying out commands might have proved disastrous. 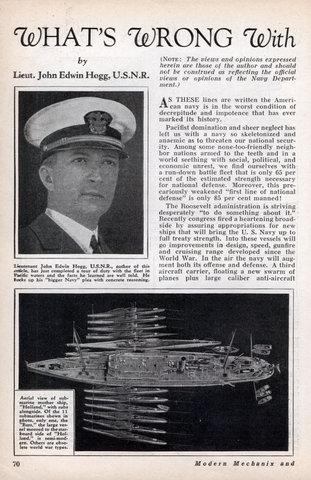 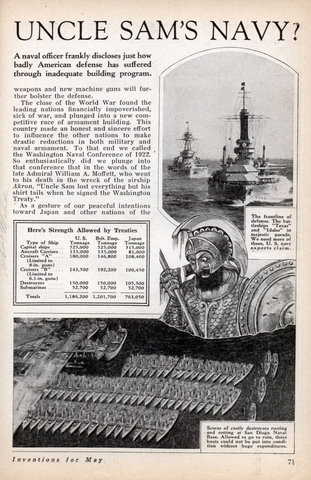 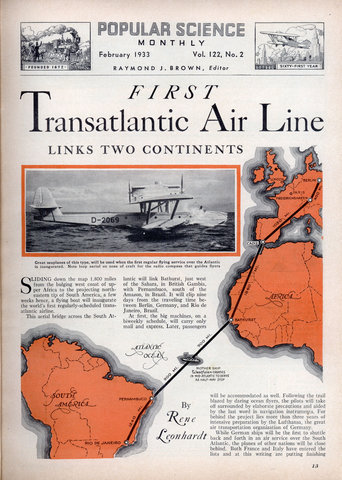 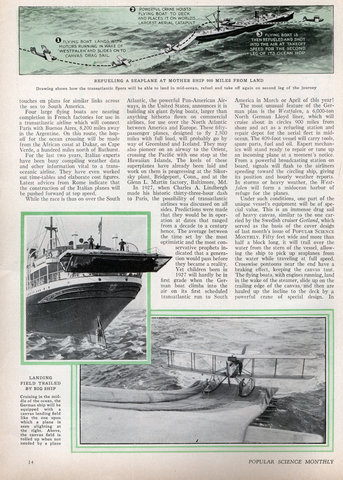 SLIDING down the map 1,800 miles from the bulging west coast of upper Africa to the projecting northeastern tip of South America, a few weeks hence, a flying boat will inaugurate the world’s first regularly-scheduled transatlantic airline.

This aerial bridge across the South Atlantic will link Bathurst, just west of the Sahara, in British Gambia, with Pernambuco, south of the Amazon, in Brazil. It will clip nine days from the traveling time between Berlin, Germany, and Rio de Janeiro, Brazil.

At first, the big machines, on a biweekly schedule, will carry only mail and express. Later, passengers will be accommodated as well. Following the trail blazed by daring ocean flyers, the pilots will take off surrounded by elaborate precautions and aided by the last word in navigation instruments. For behind the project lies more than three years of intensive preparation by the Lufthansa, the great air transportation organization of Germany. 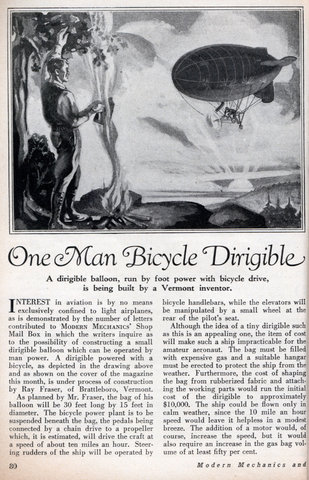 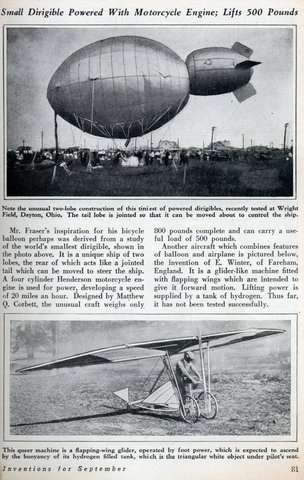 A dirigible balloon, run by foot power with bicycle drive, is being built by a Vermont inventor.

INTEREST in aviation is by no means exclusively confined to light airplanes, as is demonstrated by the number of letters contributed to Modern Mechanics’ Shop

Mail Box in which the writers inquire as to the possibility of constructing a small dirigible balloon which can be operated by man power. A dirigible powered with a bicycle, as depicted in the drawing above and as shown on the cover of the magazine this month, is under process of construction by Ray Fraser, of Brattleboro, Vermont. As planned by Mr. Fraser, the bag of his balloon will be 30 feet long by 15 feet in diameter.

Popular Science
Issue: Jun, 1936
Posted in: Aviation, Sign of the Times
Tags: airships
3 Comments on Now You Can Fly Around the World (Jun, 1936)

This sounds like a lot of fun. As long as they keep the Hindenburg filled with helium and not hydrogen on that first leg. 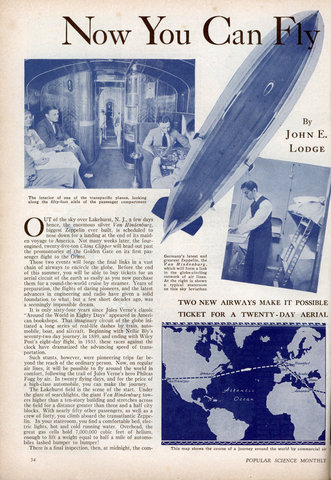 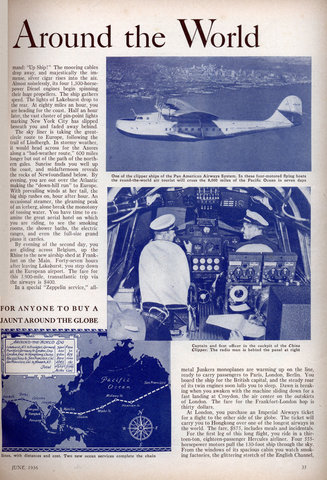 Now You Can Fly Around the World

OUT of the sky over Lakehurst, N. J., a few days hence, the enormous silver Von Hindenburg, biggest Zeppelin ever built, is scheduled to nose down for a landing at the end of its maiden voyage to America. Not many weeks later, the four-engined, twenty-five-ton China Clipper will head out past the promontories of the Golden Gate on its first passenger flight to the Orient.

Those two events will forge the final links in a vast chain of airways to encircle the globe. Before the end of this summer, you will be able to buy tickets for an aerial circuit of the earth as easily as you now purchase them for a round-the-world cruise by steamer. Years of preparation, the flights of daring pioneers, and the latest advances in engineering and radio have given a solid foundation to what, but a few short decades ago, was a seemingly impossible dream. 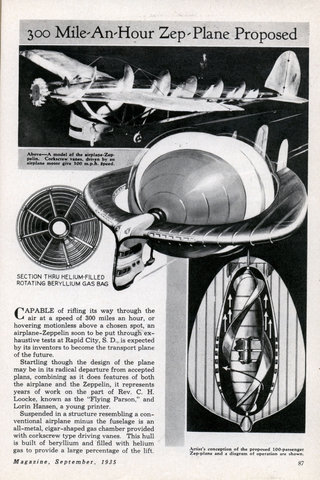 CAPABLE of rifling its way through the air at a speed of 300 miles an hour, or hovering motionless above a chosen spot, an airplane-Zeppelin soon to be put through exhaustive tests at Rapid City, S. D., is expected by its inventors to become the transport plane of the future.

Startling though the design of the plane may be in its radical departure from accepted plans, combining as it does features of both the airplane and the Zeppelin, it represents years of work on the part of Rev. C. H. Loocke, known as the “Flying Parson,” and Lorin Hansen, a young printer.

Suspended in a structure resembling a conventional airplane minus the fuselage is an all-metal, cigar-shaped gas chamber provided with corkscrew type driving vanes. This hull is built of beryllium and filled with helium gas to provide a large percentage of the lift.