In the entire article he uses the word radiation twice and never mentions radioactivity at all. 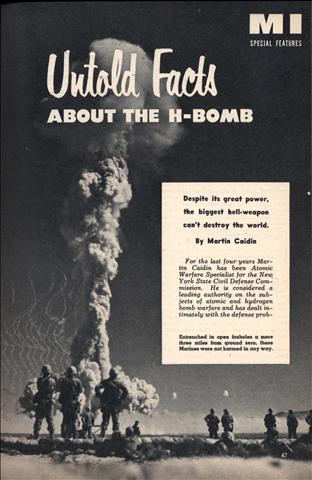 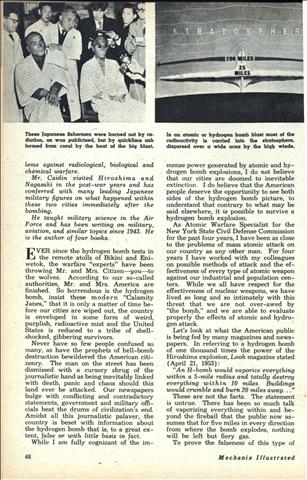 Untold Facts About the H-Bomb

Despite its great power, the biggest hell-weapon can’t destroy the world.

For the last four years Martin Caidin has been Atomic Warfare Specialist for the New York State Civil Defense Commission. He is considered a leading authority on the subjects of atomic and hydrogen bomb warfare and has dealt intimately with the defense problems against radiological, biological and chemical warfare.

Mr. Caidin visited Hiroshima and Nagasaki in the post-war years and has conferred with many leading Japanese military figures on what happened within these two cities immediately after the bombing.

Why this would be any better than a dive bomber? The pilot is screwed either way. If he misses the ship they are just going to blow up his little raft and if he hits the ship then he’ll be floating around in water that is filled with all of the people who jumped off the ship. They might hold a grudge. He might as well just fly it right into the ship, at least that way it’ll be quick. 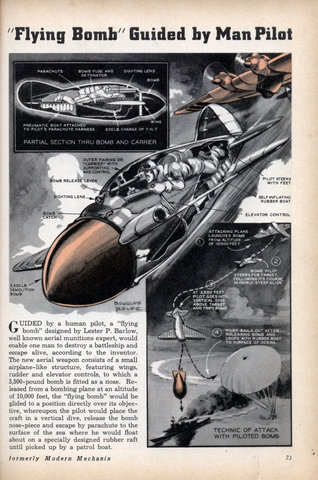 GUIDED by a human pilot, a “flying bomb” designed by Lester P. Barlow, well known aerial munitions expert, would enable one man to destroy a battleship and escape alive, according to the inventor. The new aerial weapon consists of a small airplane-like structure, featuring wings, rudder and elevator controls, to which a 3,500-pound bomb is fitted as a nose. 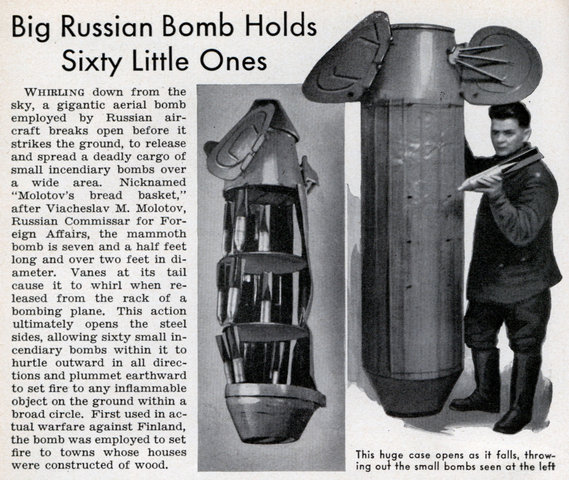 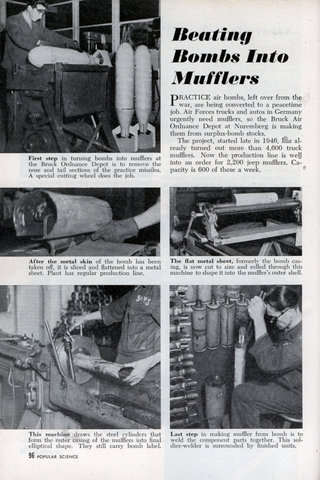 Beating Bombs Into Mufflers
PRACTICE air bombs, left over from the war, are being converted to a peacetime job. Air Forces trucks and autos in Germany urgently need mufflers, so the Bruck Air Ordnance Depot at Nuremberg is making them from surplus-bomb stocks.

The project, started late in 1946, Has already turned out more than 4,600 truck mufflers. Now the production line is well into an order for 2,200 jeep mufflers. Capacity is 600 of these a week.