Mechanics And Handicraft
Issue: Sep, 1936
Posted in: Animals
Tags: death ray
3 Comments on Would You Believe It? Oddities from Many Lands (Sep, 1936)

Would You Believe It? Oddities from Many Lands (Sep, 1936) 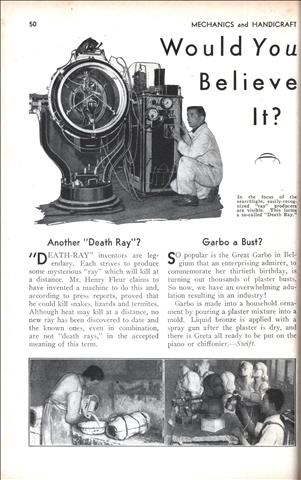 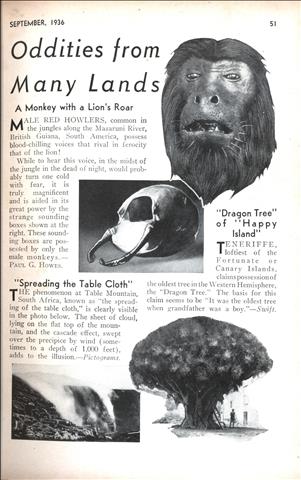 “DEATH-RAY” inventors are legendary. Each strives to produce some mysterious “ray” which will kill at a distance. Mr. Henry Fleur claims to have invented a machine to do this and, according to press reports, proved that he could kill snakes, lizards and termites. Although heat may kill at a distance, no new ray has been discovered to date and the known ones, even in combination, are not “death rays,” in the accepted meaning of this term.

I’m going to go with complete fraud. I don’t even know if an EMP would stop a 1920’s vintage motorcycle. 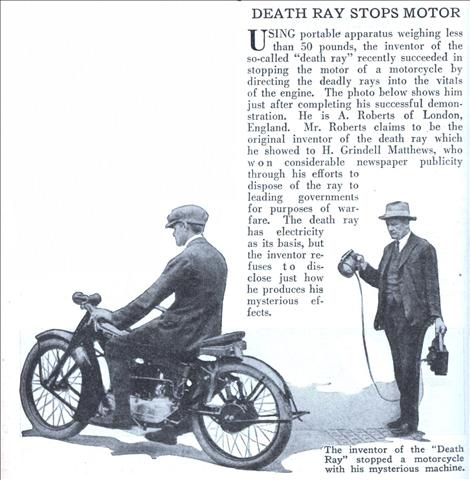 USING portable apparatus weighing less than 50 pounds, the inventor of the so-called “death ray” recently succeeded in stopping the motor of a motorcycle by directing the deadly rays into the vitals of the engine. The photo below shows him just after completing his successful demonstration.

Listed as an advantage of light beam weapons (lasers): “There is an unlimited supply of light.”

That’s really not how lasers work at all. It’s like saying electricity good because there is an unlimited supply of electrons. 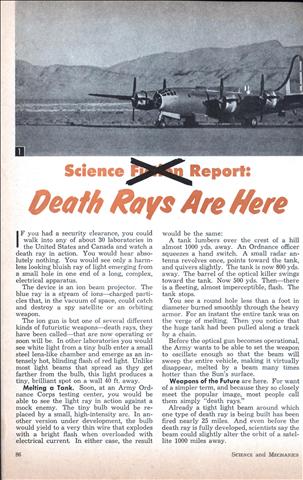 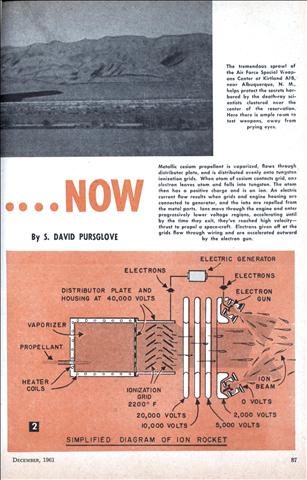 IF you had a security clearance, you could walk into any of about 30 laboratories in the United States and Canada and watch a death ray in action. You would hear absolutely nothing. You would see only a harmless looking bluish ray of light emerging from a small hole in one end of a long, complex, electrical apparatus.

The device is an ion beam projector. The blue ray is a stream of ions—charged particles that, in the vacuum of space, could catch and destroy a spy satellite or an orbiting weapon. 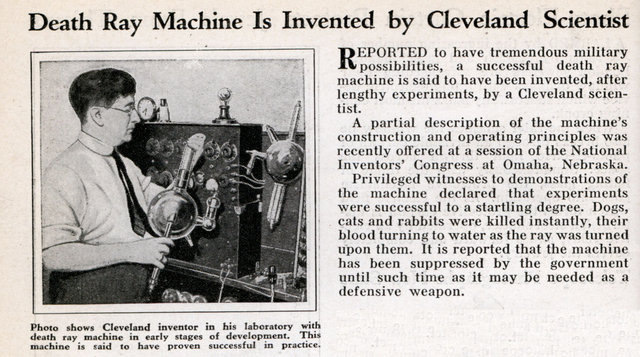 REPORTED to have tremendous military possibilities, a successful death ray machine is said to have been invented, after lengthy experiments, by a Cleveland scientist.

A partial description of the machine’s construction and operating principles was recently offered at a session of the National Inventors’ Congress at Omaha, Nebraska.