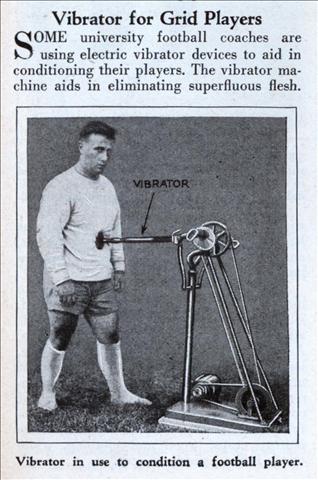 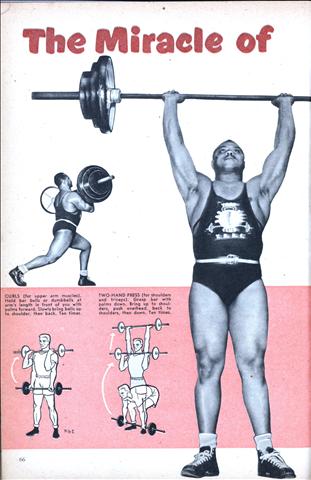 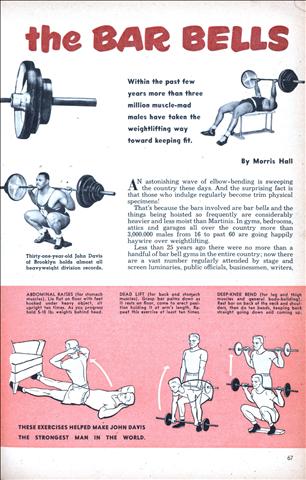 The Miracle of the BAR BELLS

Within the past few years more than three million muscle-mad males have taken the weightlifting way toward keeping fit.

AN astonishing wave of elbow-bending is sweeping the country these days. And the surprising fact is that those who indulge regularly become trim physical specimens! 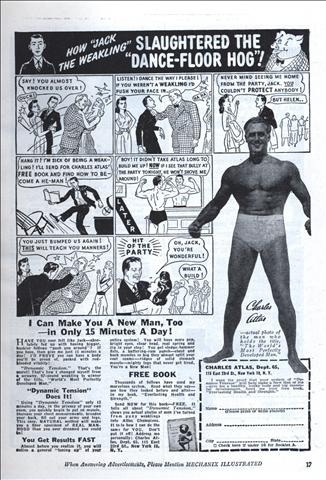 How “Jack the Weakling” SLAUGHTERED THE “DANCE-FLOOR HOG”!

HAVE YOU ever felt like Jack—absolutely fed up with having bigger, huskier fellows “push you around”? 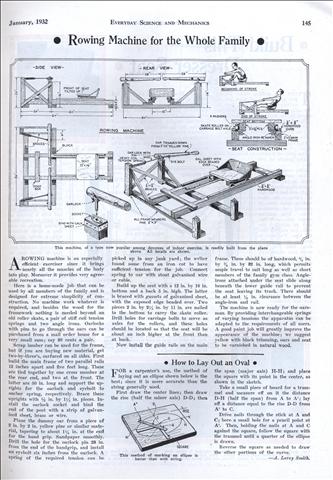 Rowing Machine for the Whole Family

A ROWING machine is an especially efficient exerciser since it brings nearly all the muscles of the body into play. Moreover it provides very agreeable recreation.

Here is a home-made job that can be used by all members of the family and is designed for extreme simplicity of construction. No machine work whatever is required, and besides the wood for the framework nothing is needed beyond an old roller skate, a pair of stiff coil tension springs and two angle irons. 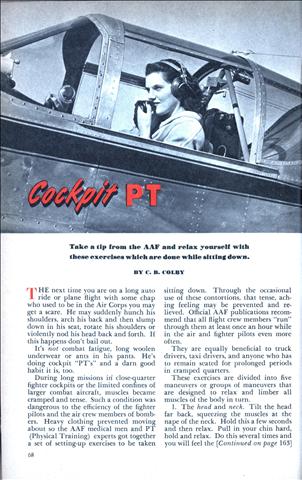 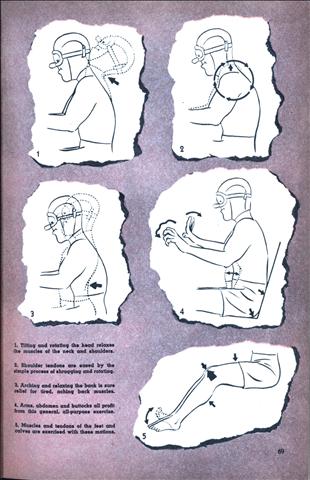 Take a tip from the AAF and relax yourself with these exercises which are done while sitting down.

THE next time you are on a long auto ride or plane flight with some chap who used to be in the Air Corps you may get a scare. He may suddenly hunch his shoulders, arch his back and then slump down in his seat, rotate his shoulders or violently nod his head back and forth. If this happens don’t bail out.

It’s not, combat fatigue, long woolen underwear or ants in his pants. He’s doing cockpit “PT’s” and a darn good habit it is, too.

“After you’ve given each spot the once over, place a heavy turkish towel over the spot and slap the flesh good and hard. Don’t be afraid to put a little determination into those slaps, either. About six good ones are enough”

Very few exercise instructions tell you to repeatedly slap your ass these days. 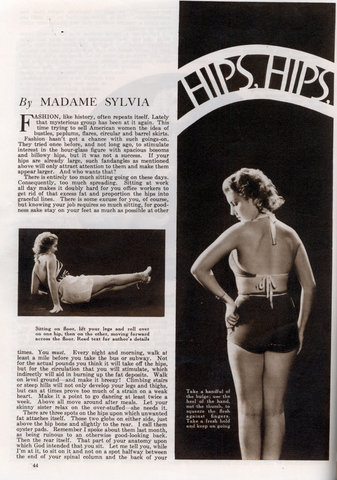 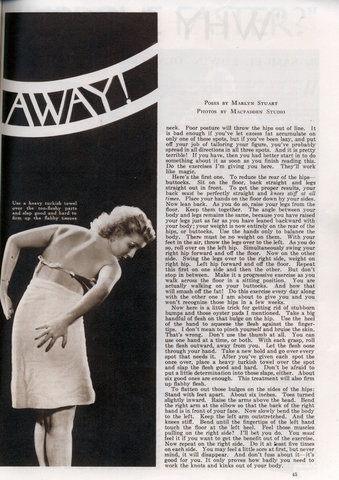 FASHION, like history, often repeats itself. Lately that mysterious group has been at it again. This time trying to sell American women the idea of bustles, peplums, flares, circular and barrel skirts.

Fashion hasn’t got a chance with such goings-on. They tried once before, and not long ago, to stimulate interest in the hour-glass figure with spacious bosoms and billowy hips, but it was not a success. If your hips are already large, such fandangles as mentioned above will only attract attention to them and make them appear larger. And who wants that? 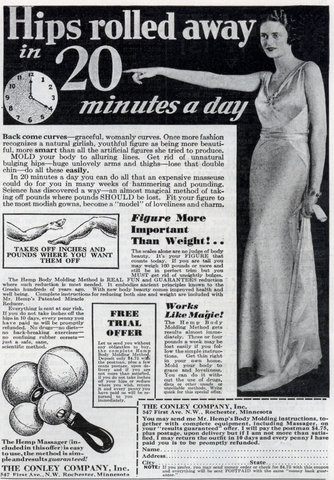 Hips rolled away in 20 minutes a day

Back come curves—graceful, womanly curves. Once more fashion recognizes a natural girlish, youthful figure as being more beautiful, more smart than all the artificial figures she tried to produce.

MOLD your body to alluring lines. Get rid of unnatural bulging hips—huge unlovely arms and thighs—lose that double chin—do all these easily.

In 20 minutes a day you can do all that an expensive masseuse could do for you in many weeks of hammering and pounding. Science has discovered a way—an almost magical method of taking off pounds where pounds SHOULD be lost. Fit your figure to the most modish gowns, become a “model” of loveliness and charm.

Physical Culture
Issue: Mar, 1922
Posted in: Advertisements
Tags: exercise
2 Comments on Can a Man Be as Strong as a Lion? (Mar, 1922) 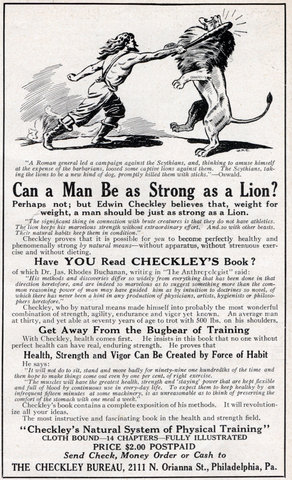 Can a Man Be as Strong as a Lion?

Perhaps not; but Edwin Checkley believes that, weight for weight, a man should be just as strong as a Lion.

“The significant thing in connection with brute creatures is that they do not have athletics. The lion keeps his marvelous strength without extraordinary effort. And so with other beasts. Their natural habits keep them in condition.”

Checkley proves that it is possible for you to become perfectly healthy and phenomenally strong by natural means—without apparatus, without strenuous exercise and without dieting. 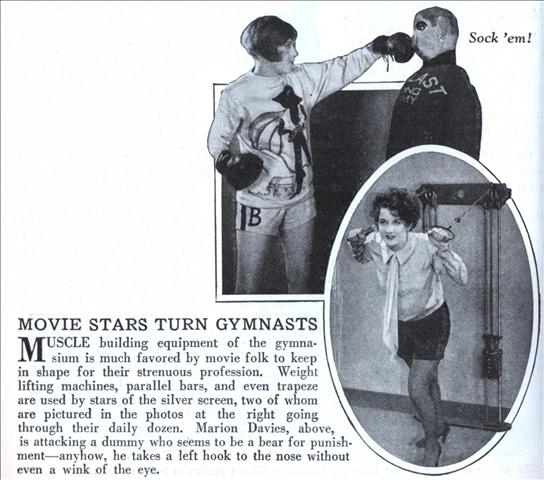 MUSCLE building equipment of the gymnasium is much favored by movie folk to keep in shape for their strenuous profession. Weight lifting machines, parallel bars, and even trapeze are used by stars of the silver screen, two of whom are pictured in the photos at the right going through their daily dozen. Marion Davies, above, is attacking a dummy who seems to be a bear for punishment—anyhow, he takes a left hook to the nose without even a wink of the eye.

Why is there a basketball team watching the girl ride? And also, doesn’t almost one slice per minute seem a bit high? 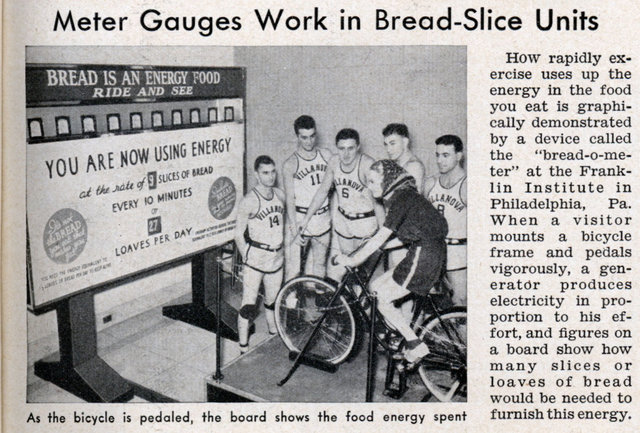 How rapidly exercise uses up the energy in the food you eat is graphically demonstrated by a device called the “bread-o-meter” at the Franklin Institute in Philadelphia, Pa. When a visitor mounts a bicycle frame and pedals vigorously, a generator produces electricity in proportion to his effort, and figures on a board show how many slices or loaves of bread would be needed to furnish this energy.