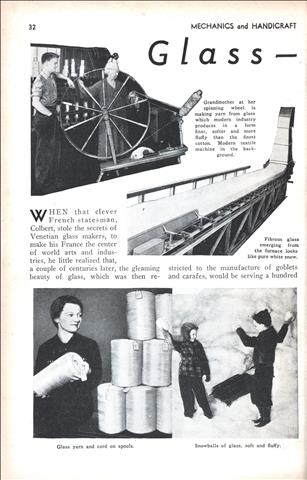 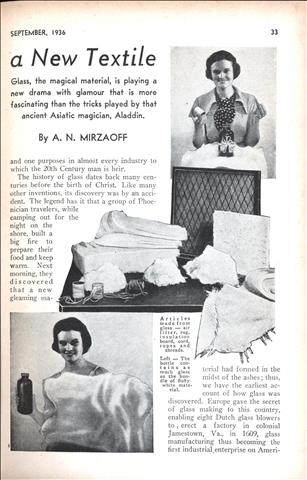 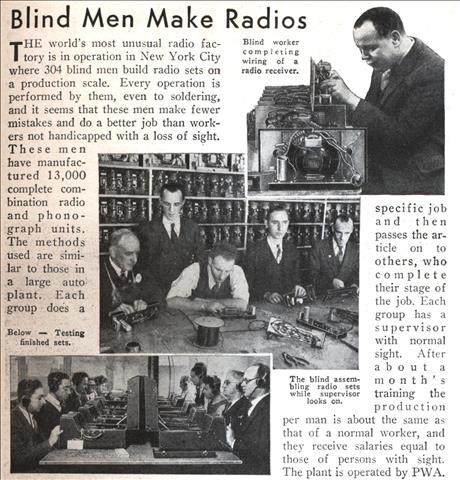 Illustrated World
Issue: Jun, 1917
Posted in: General
Tags: how its made
No Comments on THE MANUFACTURE OF FINE MIRRORS (Jun, 1917) 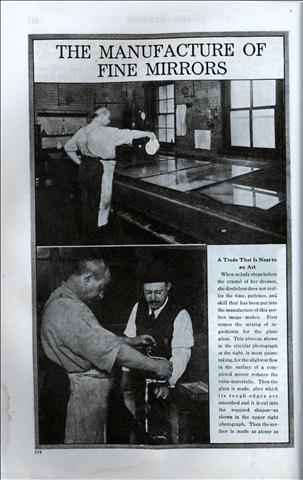 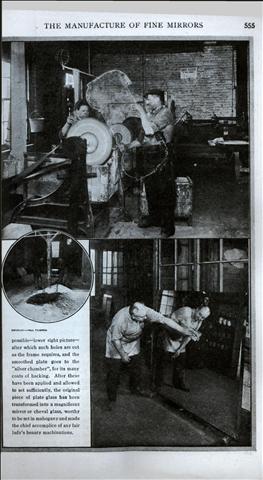 THE MANUFACTURE OF FINE MIRRORS

A Trade That Is Near to an Art When milady stops before the crystal of her dresser, she doubtless does not realize the time, patience, and skill that has been put into the manufacture of this perfect image-maker.

Technical World
Issue: Feb, 1909
Posted in: General
Tags: how its made, matches
1 Comment on WHOLE FORESTS TURNED INTO MATCHES (Feb, 1909) 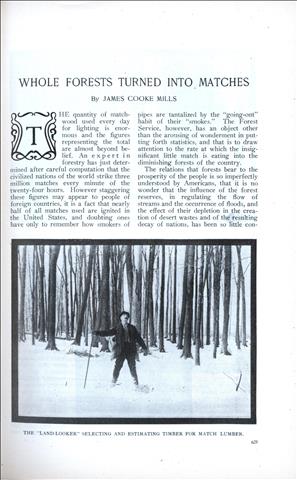 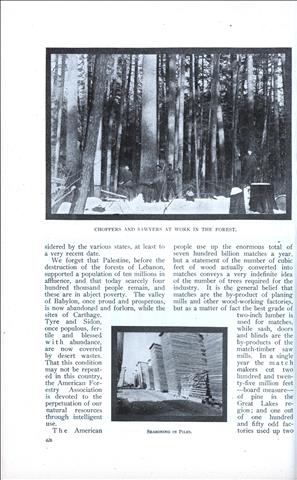 HE quantity of matchwood used every day for lighting is enormous and the figures representing the total are almost beyond belief. An expert in forestry has just determined after careful computation that the civilized nations of the world strike three million matches every minute of the twenty-four hours.

Popular Science
Issue: Jul, 1931
Posted in: Medical
Tags: how its made
2 Comments on Thousands of Pills for Human Ills Turned Out Each Minute by Whirling Machines (Jul, 1931)

Thousands of Pills for Human Ills Turned Out Each Minute by Whirling Machines (Jul, 1931)

I’m going to go out on a limb and say that all the poison ivy and bee’s stingers went into the homeopathic pills, even though the author thinks the only difference is in how hard the pills are. 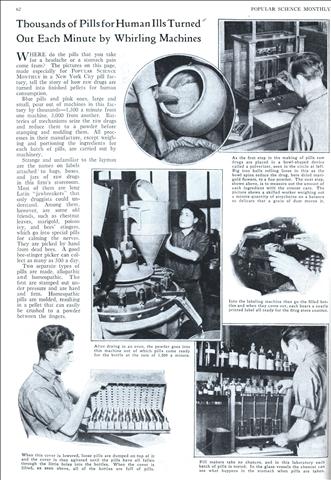 WHERE do the pills that you take for a headache or a stomach pain come from? The pictures on this page, made especially for Popular Science Monthly in a New York City pill factory, tell the story of how raw drugs are turned into finished pellets for human consumption. 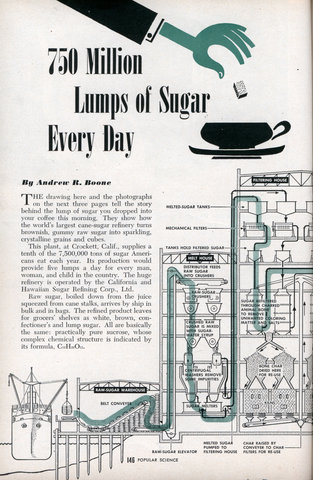 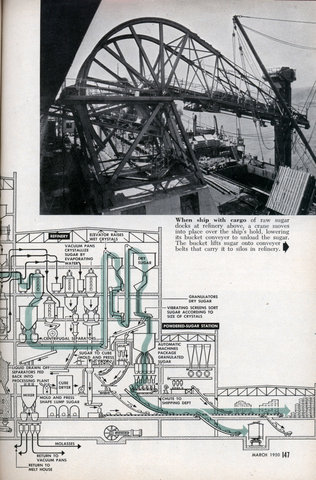 750 Million Lumps of Sugar Every Day

THE drawing here and the photographs on the next three pages tell the story behind the lump of sugar you dropped into your coffee this morning. They show how the world’s largest cane-sugar refinery turns brownish, gummy raw sugar into sparkling, crystalline grains and cubes.

Popular Science
Issue: Mar, 1922
Posted in: How to
Tags: how its made
3 Comments on How Machines Make Magic Carpets from Oil and Cork (Mar, 1922)

How Machines Make Magic Carpets from Oil and Cork (Mar, 1922) 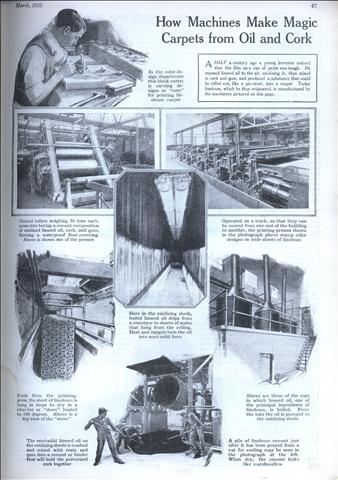 How Machines Make Magic Carpets from Oil and Cork

A HALF a century ago a young inventor noticed that the film on a can of paint was tough. He exposed linseed oil to the air, oxidizing it, then mixed in cork and gum, and produced a substance that could be rolled out, like a pie-crust, into a carpet. Today linoleum, which he thus originated, is manufactured by the machinery pictured on this page.

Popular Science
Issue: Aug, 1931
Posted in: How to
Tags: how its made, lighting, signs
1 Comment on MAGIC OF NEON SIGN MAKING SHOWN IN PICTURES (Aug, 1931) 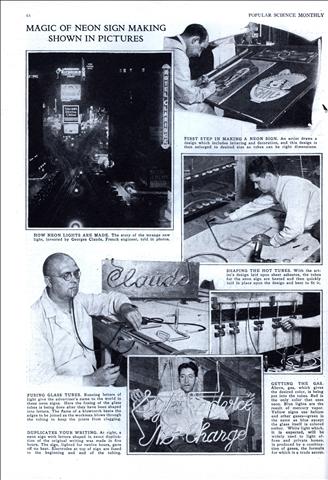 HOW NEON LIGHTS ARE MADE. The story of the strange new light, invented by Georges Claude, French engineer, told in photos.

FIRST STEP IN MAKING A NEON SIGN. An artist draws a design which includes lettering and decoration, and this design is then enlarged to desired size so tubes can be right dimensions.

SHAPING THE HOT TUBES. With the artist’s design laid upon sheet asbestos, the tubes for the neon sign are heated and then quickly laid in place upon the design and bent to fit it.

Popular Science
Issue: Dec, 1933
Posted in: General
Tags: how its made
No Comments on ROPE MAKERS OF SPAIN TWIST STRANDS BY HAND (Dec, 1933)

It’s kind of crazy to contrast this with the way modern rope is made (video). 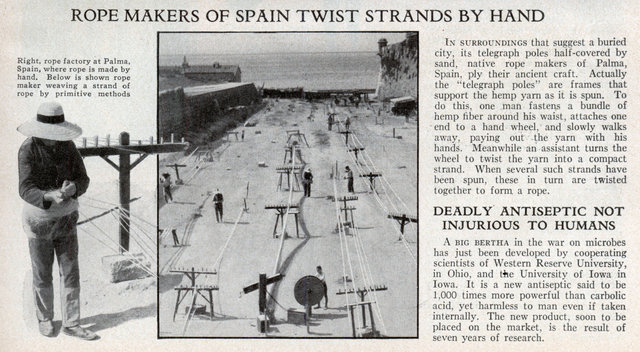 In surroundings that suggest a buried city, its telegraph poles half-covered by sand, native rope makers of Palma, Spain, ply their ancient craft. Actually the “telegraph poles” are frames that support the hemp yarn as it is spun. To do this, one man fastens a bundle of hemp fiber around his waist, attaches one -end to a hand wheel, and slowly walks away, paying out the yarn with his hands. Meanwhile an assistant turns the wheel to twist the yarn into a compact strand. When several such strands have been spun, these in turn are twisted together to form a rope.

Mechanix Illustrated
Issue: May, 1950
Posted in: House and Home
Tags: beds, furniture, how its made
1 Comment on Beds From Rubber Bubbles (May, 1950) 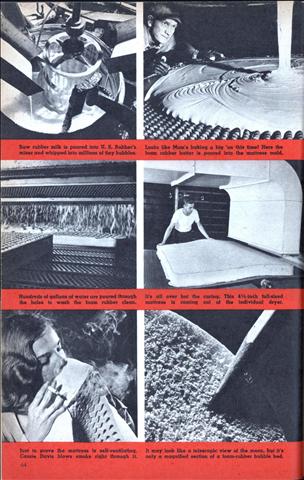 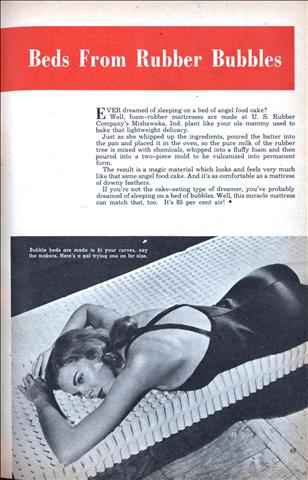 EVER dreamed of sleeping on a bed of angel food cake?

Well, foam-rubber mattresses are made at U. S. Rubber Company’s Mishawaka, Ind. plant like your ole mammy used to bake that lightweight delicacy.

Just as she whipped up the ingredients, poured the batter into the pan and placed it in the oven, so the pure milk of the rubber tree is mixed with chemicals, whipped into a fluffy foam and then poured into a two-piece mold to be vulcanized into permanent form.