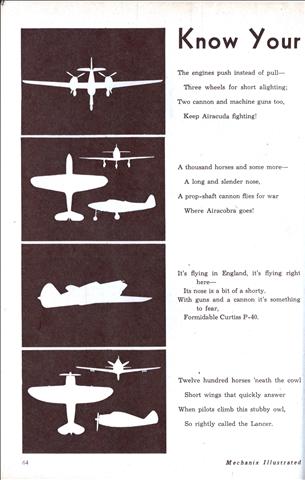 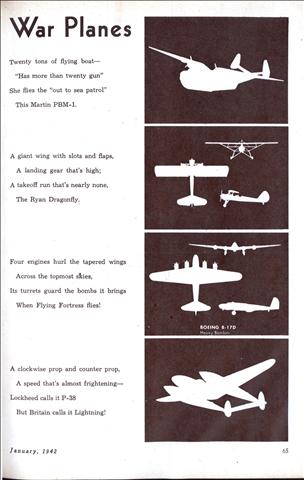 The engines push instead of pull—
Three wheels for short alighting;
Two cannon and machine guns too,
Keep Airacuda fighting!

Considering that this was published just a few months after Pearl Harbor it seems amazingly mild and reasonable.

HOW YOU LOOK TO THE JAPS

DO YOU believe that the Japanese launched their attack as a form of national suicide? If so, you’re wrong. They have dared to attack the most powerful nation in the world simply because they believe our national characteristics prove us to be vulnerable. 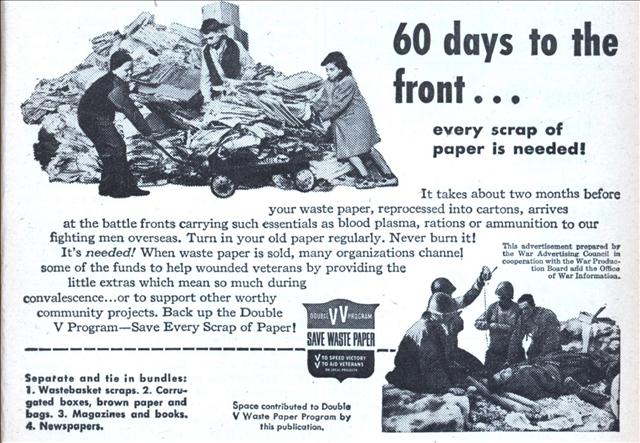 60 days to the front…every scrap of paper is needed!

It takes about two months before your waste paper, reprocessed into cartons, arrives at the battle fronts carrying such essentials as blood plasma, rations or ammunition to our fighting men overseas. Turn in your old paper regularly. Never burn it! It’s needed! When waste paper is sold, many organizations channel some of the funds to help wounded veterans by providing the little extras which mean so much during convalescence…or to support other worthy community projects. Back up the Double V Program—Save Every Scrap of Paper! 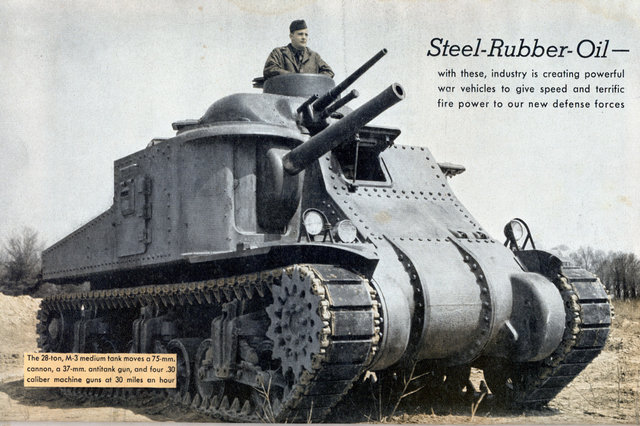 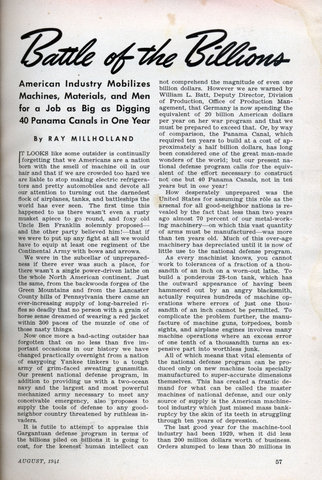 Battle of the Billions

American Industry Mobilizes Machines, Materials, and Men for a Job as Big as Digging 40 Panama Canals in One Year

IT LOOKS like some outsider is continually forgetting that we Americans are a nation born with the smell of machine oil in our hair and that if we are crowded too hard we are liable to stop making electric refrigerators and pretty automobiles and devote all our attention to turning out the darnedest flock of airplanes, tanks, and battleships the world has ever seen.

If war should be declared today, Russia would have more men and more planes at her command than any other nation in Europe. The Soviet Republic boasts a standing army of 1,300,000, reserves of 7,000,000 and an air fleet of 3,000 planes. 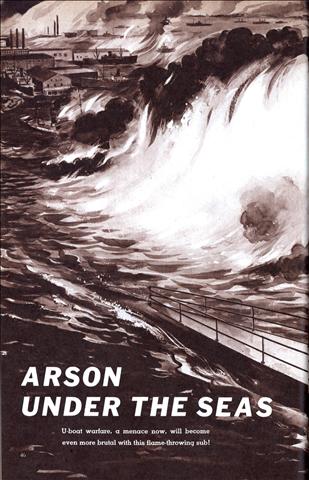 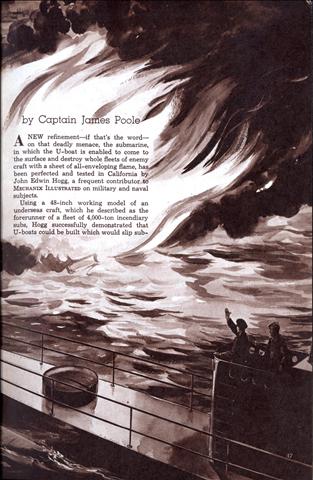 Wow, this is just about the most grim camera ad I’ve ever seen.

“Chinese captive granted extra moment of life, but only while noble son of Nippon holds heroic pose for snapshot to delight honorable folks back home.” 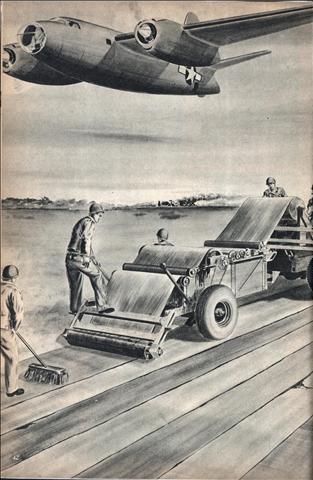 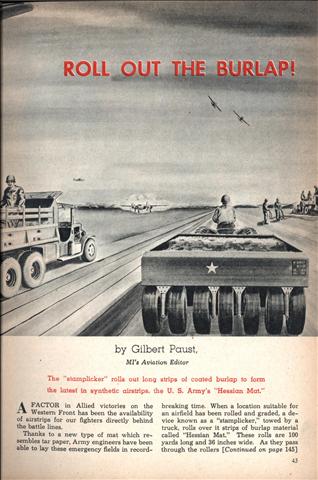 ROLL OUT THE: BURLAP!

The “stamplicker” rolls out long strips of coated burlap to form the latest in synthetic airstrips, the U.S. Army’s “Hessian Mat.”

A FACTOR in Allied victories on the Western Front has been the availability of airstrips for our fighters directly behind the battle lines.

Thanks to a new type of mat which resembles tar paper, Army engineers have been able to lay these emergency fields in record- breaking time. 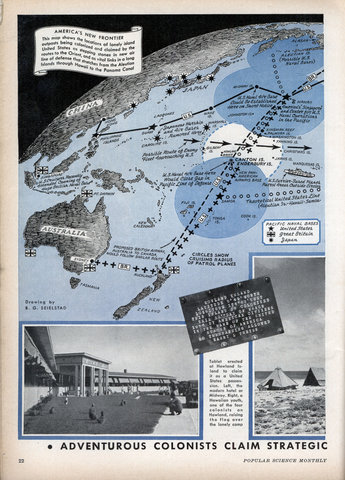 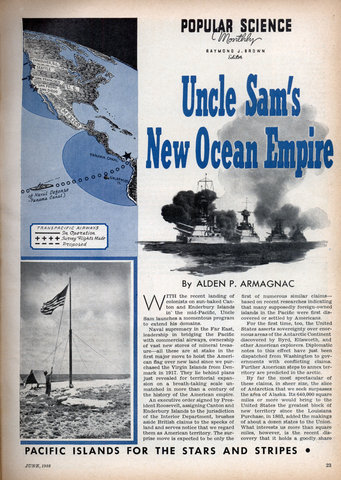 Naval supremacy in the Far East, leadership in bridging the Pacific with commercial airways, ownership of vast new stores of mineral treasure—all these are at stake in the first major move to hoist the American flag over new land since we purchased the Virgin Islands from Denmark in 1917. 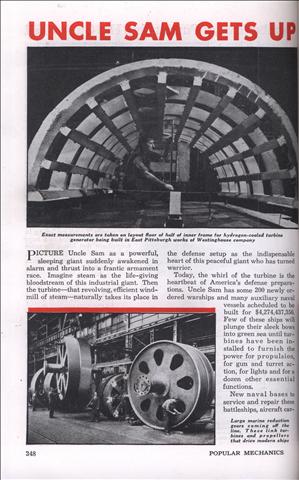 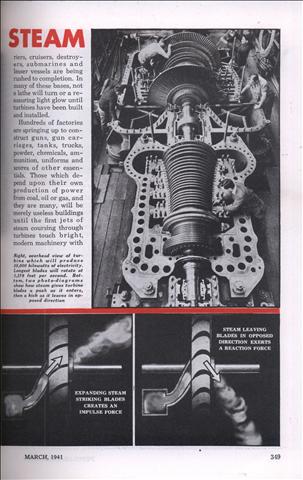 UNCLE SAM GETS UP STEAM

PICTURE Uncle Sam as a powerful, sleeping giant suddenly awakened in alarm and thrust into a frantic armament race. Imagine steam as the life-giving bloodstream of this industrial giant. Then the turbine—that revolving, efficient windmill of steam—naturally takes its place in the defense setup as the indispensable heart of this peaceful giant who has turned warrior.