I don’t see how this would work. It assumes that all of the words have equivalents in all the languages and that there is no such thing as grammar or context.

The other difference between this and other artificial languages like Esperanto is that you can actually learn to speak those. The only time you see someone walking around spouting a string of numbers is in movies where an android goes haywire. 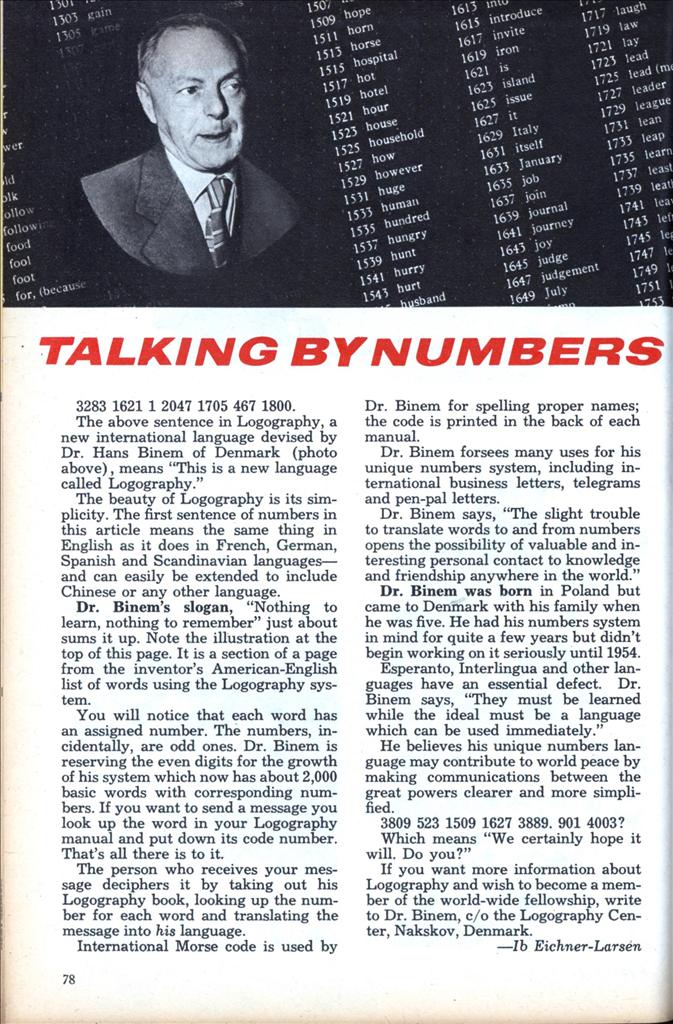 The above sentence in Logography, a new international language devised by Dr. Hans Binem of Denmark (photo above), means “This is a new language called Logography.”

The beauty of Logography is its simplicity. The first sentence of numbers in this article means the same thing in English as it does in French, German, Spanish and Scandinavian languages— and can easily be extended to include Chinese or any other language.

Dr. Binem’s slogan, “Nothing to learn, nothing to remember” just about sums it up. Note the illustration at the top of this page. It is a section of a page from the inventor’s American-English list of words using the Logography system.

You will notice that each word has an assigned number. The numbers, incidentally, are odd ones. Dr. Binem is reserving the even digits for the growth of his system which now has about 2,000 basic words with corresponding numbers. If you want to send a message you look up the word in your Logography manual and put down its code number. That’s all there is to it.

The person who receives your message deciphers it by taking out his Logography book, looking up the number for each word and translating the message into his language.

International Morse code is used by Dr. Binem for spelling proper names; the code is printed in the back of each manual.

Dr. Binem says, “The slight trouble to translate words to and from numbers opens the possibility of valuable and interesting personal contact to knowledge and friendship anywhere in the world.”

Dr. Binem was born in Poland but came to Denmark with his family when he was five. He had his numbers system in mind for quite a few years but didn’t begin working on it seriously until 1954.

Esperanto, Interlingua and other languages have an essential defect. Dr. Binem says, “They must be learned while the ideal must be a language which can be used immediately.”

He believes his unique numbers language may contribute to world peace by making communications between the great powers clearer and more simplified.

Which means “We certainly hope it will. Do you?”

If you want more information about Logography and wish to become a member of the world-wide fellowship, write to Dr. Binem, c/o the Logography Center, Nakskov, Denmark.