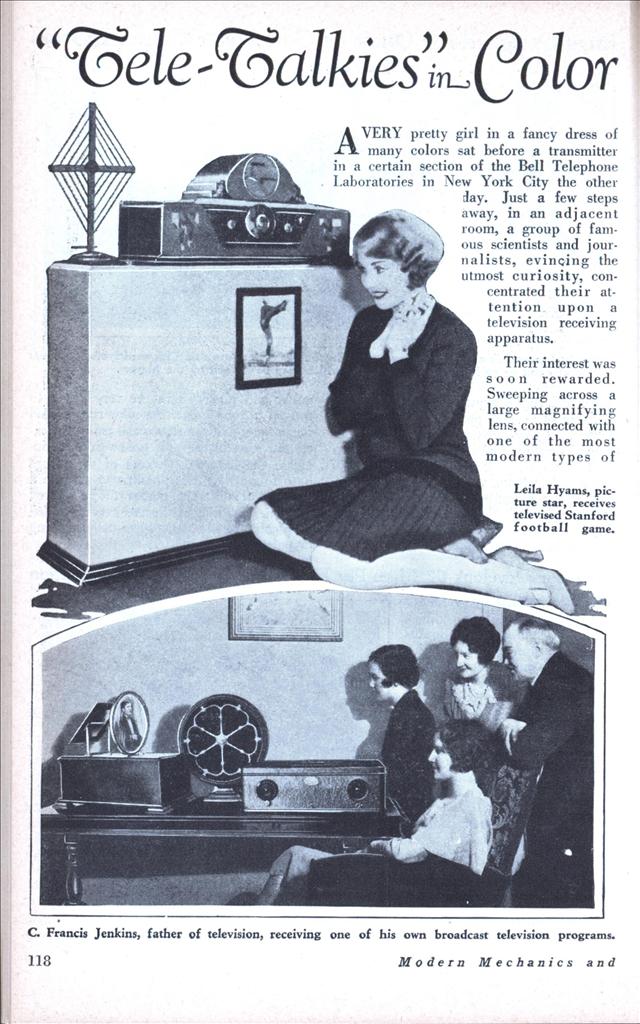 Their interest was soon rewarded. Sweeping across a large magnifying lens, connected with one of the most modern types of radiovisor, could be plainly seen the dress, features and form of the charming girl, in the original colors!

Here was an accomplishment indeed. Not only did it mark the first time movies in full color had been broadcast successfully in this country, but it gave promise of a time not remote when Mr. Average American, seated before an inexpensive radio set, will be able to view world events, thousands of miles away, in all their colorful majesty.

This triumph of television research is only one of the many introduced to an astonished America during the past few months. The famous British radio inventor, John L. Baird, has just opened an office in New York, where his American representative, Captain W. J. Jerrard, plans to introduce something entirely unique to Yankee television enthusiasts which he refers to as the “tele-talkie.” Meanwhile, C. Francis Jenkins of Washington, D. C., world-noted pioneer in radiomovies, has lately made three outstanding contributions to the new science: a quartz rod drum to take the place of the customary scanning disc used in television transmitting; a novel television camera making it possible to accomplish airplane broadcasts; and a unique system of transmitting, as a regular procedure, movies that in appearance are not so remote from those we now see in the average motion picture theatre.

Color tele-movies is the achievement of Dr. Herbert E. Ives of the Bell interests. A point be likes to stress about his invention is that it does not require entirely new apparatus—it utilizes the same light sources —- scanning discs, synchronizing systems, etc.—and the same type of circuit and method of amplification as are used in the monochromatic method. However, Dr. Ives explains that there are needed a different type and arrangement of the photo-electric cells at the sending end, as well as of the neon and argon lamps at the receiving end.

Dr. Ives points out that for the ordinary human eye any color may be repre sented by the proper mixture of red, green and blue—the three fundamental colors. In order to mix these colors effectively a method has been used known as “beam scanning.” Explains Dr. Ives: “To apply this method to color television, three sets of photo-electric cells are employed in place of the one set used before. Each of these sets is provided with color filters made up of sheets of colored gelatin. One set lias filters of an orange-red color which makes the cells see things as the hypothetical red sensitive nerves of the retina see them; another set has yellow-green filters to give the green signal, and the third set has greenish-blue filters which perform a corresponding function for the blue constituent of vision.

“The scanning disc and the light source are the same as with the beam scanning arrangement used in monochromatic television. The only difference is in the photo-electric cells, and thanks to the tri-chromatic nature of color vision, it is only necessary to have three times the number of cells used previously to reproduce all colors. Three sets of television signals, one for each set of cells, are generated instead of one, and three channels are used for the transmission of the television signals. In the new photoelectric cell container, twenty-four cells are employed, two with “blue” filters, eight with “green” filters and fourteen with ‘”red” filters. Large sheets of rough-pressed glass are set up some distance in front of the cell containers, so that the light reflected from the subject is well diffused.

“For color television the images must be received in their appropriate colors and viewed simultaneously, this reception being similar essentially to our method of monochromatic television. The surface of a disc similar to that used at the sending end is viewed, and the light from the receiving lamp is focussed on the pupil of the observer’s eye by suitable lenses. To combine the light of the three lamps, they are placed at some distance behind the scanning disc and two semi-transparent mirrors are set up at right angles to each other, but each at 45° to the line of sight. One lamp is then viewed directly through both mirrors and one lamp is seen by reflection from each (see diagram).

“The receiving apparatus at present consists of one of the 16-inch television discs used in our earlier experimental work. Behind it are three special lamps fable to work at high current densities), and a lens system which focusses the light into a small aperture in front of the disc. The observer looking into this aperture receives, through each hole of the disc as it passes by, light from the three lamps—each controlled by its appropriate signal from the sending end. When the intensities of the three images are properly adjusted he therefore sees an image in its true colors and with the general appearance of a colored motion picture.”

The “tele-talkie” of John L. Baird seems to rightfully deserve its unique title, for it consists of simultaneous broadcasts, on the same wave length, of the voices and images of living entertainers. This is being done, Captain W. J. Jerrard, Baird’s spokesman, explains, “on the present wave length facilities of stations and without disturbing their present apparatus, just as it is sent over ordinary radio broadcasting wave lengths.