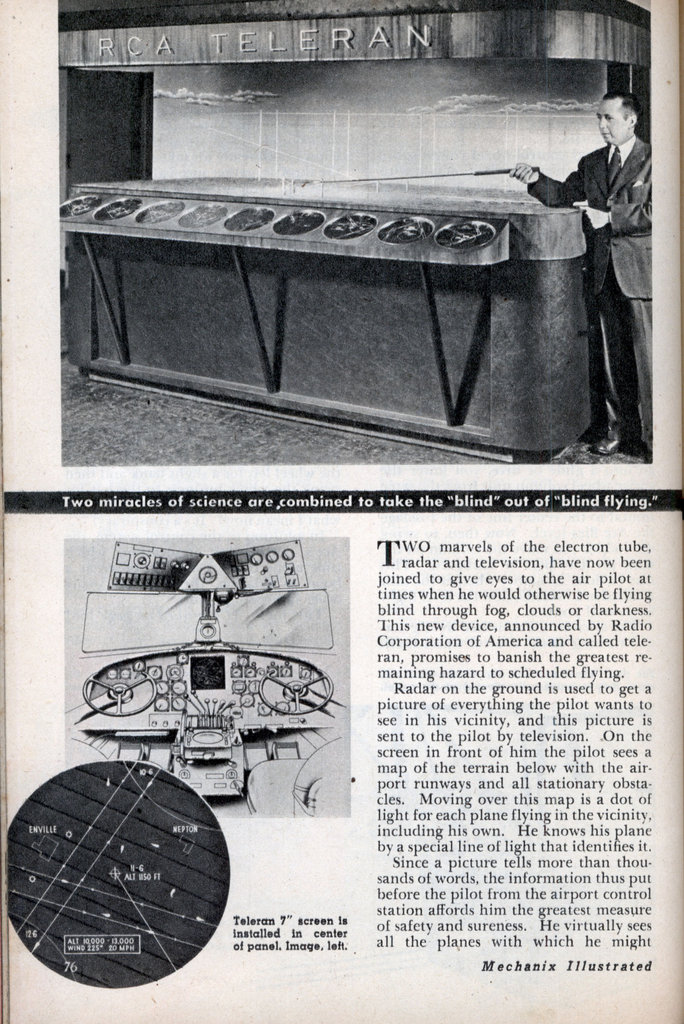 TWO marvels of the electron tube, radar and television, have now been joined to give eyes to the air pilot at times when he would otherwise be flying blind through fog, clouds or darkness. This new device, announced by Radio Corporation of America and called teleran, promises to banish the greatest remaining hazard to scheduled flying.

Radar on the ground is used to get a picture of everything the pilot wants to see in his vicinity, and this picture is sent to the pilot by television. On the screen in front of him the pilot sees a map of the terrain below with the airport runways and all stationary obstacles. Moving over this map is a dot of light for each plane flying in the vicinity, including his own. He knows his plane by a special line of light that identifies it.

Since a picture tells more than thousands of words, the information thus put before the pilot from the airport control station affords him the greatest measure of safety and sureness. He virtually sees all the planes with which he might collide; knows their relative positions and the direction of their flight. He “sees” the airport with its runways clearly outlined. If there are tall buildings or hills, the radar spots them and shows them to him on his screen.

The plane itself does not have to carry around heavy and cumbersome radar equipment; that is all in the airport. The plane carries only a relatively light receiving apparatus. One radar outfit on the ground suffices to give pictorial information to all planes in the vicinity.

In announcing its development of this new aid to air navigation, RCA stated that this is its most important postwar enterprise, the research program to which its experts are giving most of their efforts. A demonstration was staged at Indianapolis, the first public revelation of the new system.

RCA considers that teleran is ideally suited to accurate and safe control of traffic into and out of busy airports. Since neither radar nor television can be balked by bad visibility, planes can be moved with regularity when ceilings are low, avoiding the delays of “stacking up” under the control methods now in use.

The radar-television equipment has a range of 30 to 50 miles, which is considered quite enough for airport control. This furnishes the control center and all pilots within range complete data for continuous operations.

The pictures that a pilot sees on his instrument board when teleran is used look more like drawings than photo- graphs, but they are actually photographed by the television camera at the airport. A composite picture is placed before the camera, consisting of data brought in by radar, weather reports, barometer readings, figures showing the distance from the airport, and so on. Individual messages can be sent, too, for the benefit of any airman in the area. The control officer can do this by pointing to the individual pilot’s spot on the picture and inserting instructions or information for him. The television camera photographs the finger against the background of other data.

Voice channels can still be used, but it is anticipated that such communication will be held to a minimum, being usually unnecessary.

Still further simplifying the pilot’s task, the teleran apparatus has a method of separating the radar echoes from planes according to altitude layers. This avoids the confusion of showing too much at one time. The pilot can push a button to get a picture of any one of nine altitude layers, with all planes flying in the vicinity for each layer.

By pushing another button, the pilot picks up a weather map whenever he wishes. This is kept up to the minute at the airport control station. The map gives him the weather information he needs much more quickly than if it were sent by voice.

If it is necessary to send a plane to another airport for any reason, the pilot not only gets instruction through the television picture, but his route is telran on the map for him at the same time. All he does is put his individual light spot on the indicated line and hold it there.

Radar scopes at the airport continually pick up echoes from planes at all altitudes for a distance of 30 to 50 miles. As these are automatically separated according to altitude, there is a separate radar tube for each layer, and a television camera focused on each tube. The map of the area, together with other symbols and information, is drawn on a clear plastic sheet and placed between the radar screen and the camera. This composite picture is what goes over the air waves to the pilot’s cockpit. Relative locations of all planes on the map are thus shown to him at all times.

Each plane using teleran carries a “transponder,” which consists of a receiver and transmitter connected together so that the transmitter emits one or more pulses when the receiver picks up a pulse from the ground radar. In this way the radar signal passes back and forth from ground to plane constantly.