Scientific American
Issue: May, 1953
Posted in: Television
Tags: politics
17 Comments on TELEVISION AND THE ELECTION (May, 1953) 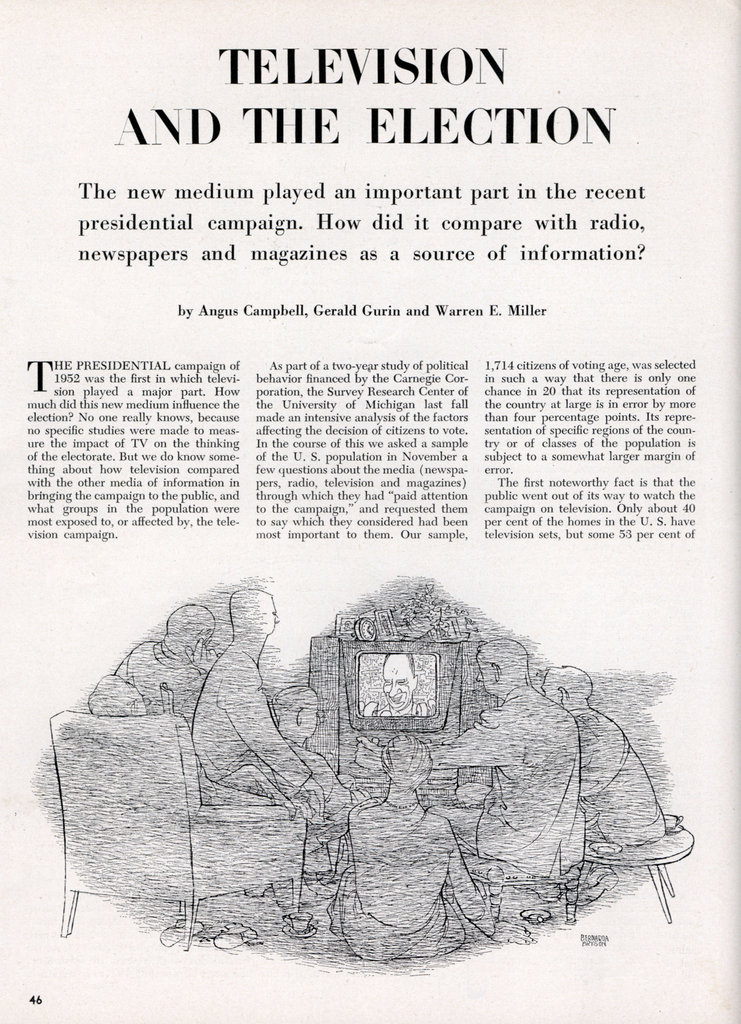 TELEVISION AND THE ELECTION

The new medium played an important part in the recent presidential campaign. How did it compare with radio, newspapers and magazines as a source of information?

THE PRESIDENTIAL campaign of 1952 was the first in which television played a major part. How much did this new medium influence the election? No one really knows, because no specific studies were made to measure the impact of TV on the thinking of the electorate. But we do know something about how television compared with the other media of information in bringing the campaign to the public, and what groups in the population were most exposed to, or affected by, the television campaign.

As part of a two-year study of political behavior financed by the Carnegie Corporation, the Survey Research Center of the University of Michigan last fall made an intensive analysis of the factors affecting the decision of citizens to vote. In the course of this we asked a sample of the U. S. population in November a few questions about the media (newspapers, radio, television and magazines) through which they had “paid attention to the campaign” and requested them to say which they considered had been most important to them. Our sample, 1,714 citizens of voting age, was selected in such a way that there is only one chance in 20 that its representation of the country at large is in error by more than four percentage points. Its representation of specific regions of the country or of classes of the population is subject to a somewhat larger margin of error.

There are several points of interest in the geographical picture given by this table. The relatively poor showing of radio in the Northeast indicates that television is supplanting radio in that region. In the South radio leads all other media because that predominantly rural region has relatively few TV sets and a smaller proportion of newspaper readership than other parts of the country.

WHEN PEOPLE were asked which medium had given them the most information about the campaign, the impact of television became even more striking [see middle table at right]. In the nation as a whole television, though available to only a minority of the people, led the other media in the number of persons who rated it most informative. Of those who actually watched the campaign on TV (nearly all of whom were exposed to other media), 59 per cent considered television their most important information source. In contrast, among those who followed the campaign in newspapers, which takes in 79 per cent of the population, only 28 per cent rated newspapers as the medium from which they got most of their information. Again there were marked regional differences: the Northeast relied most heavily on television, the South on radio, and the Midwest and West were almost identical in pattern, with television in the lead.

To what sections of the population did television appeal most? The situation is summarized in the table at the top of the next page, which breaks down the responses into population categories. To begin with, the ability to buy a set obviously is an important selective factor: the proportion of people who followed the campaign on television was much smaller in the lowest income group (under $3,000) than in the higher-income groups. (We know that ownership of sets rises with income.) In general the attraction, or availability, of television was highest in metropolitan areas and among the better paid groupsâ€”professional and business men, white-collar workers and skilled workers. The rural, low-income and unskilled groups relied mainly on radio. But it seems certain that among these people also television will supplant radio as TV sets, and broadcasting stations, become available to them. Where income and facilities allow, people of all groups tend to turn from radio to television.

When it comes to newspaper and magazine reading, the differences among the occupational and income groups are not so wide. But there are substantial differences according to education: the better educated people were, the more they read about the campaign. And by the same token, the less they valued television as the source of information. The income factor masks this, as well-educated people are more likely to have high incomes and therefore to own television sets. When we separated education from income status, however, we found that people with college degrees or some college education rated television markedly lower than did those with less schooling. This is shown in the table at the bottom of the next page.

Among people in the higher-income groups, who can afford television sets, the campaign on TV seems to have made a significantly greater impact on those with only a grammar or high school education than on college people. It got its highest rating from people with an income of $5,000 or more who never went to high school. A third of the college group considered TV the most important single source of information on the campaign, but reading played a pro- -portionately larger part in their information-getting than it did for those with less education. This simply bears out the truism that higher education tends to create active rather than passive habits of obtaining information.

Television as a campaign medium has made its main inroads into radio. On the whole the newspapers and magazines so far seem to have held their ground, for their importance was rated as high in the Northeast, where TV sets are most common, as in other regions. But as television expands its coverage and develops techniques for appealing to the various kinds of audiences, it will undoubtedly offer more and more competition for the attention of the voters.

AS TO HOW television affected the voting itself, we have no clear evidence. Those who rated television their most important source of information voted for Eisenhower in about the same proportion as those who relied mainly on radio or newspapers [see bottom table above]. Magazine readers were considerably more Republican. Stevenson did somewhat better among the television devotees than among those who preferred radio or newspapers, but these differences may not be very significant, as geographical and other factors also entered into the situation.

We cannot tell from our studies whether television had a distinctive im-pact on voters. It may be that television, radio and the newspapers were all equally partisan (or nonpartisan) in covering the campaign and thus had similar effects on their followers. On the other hand, it is also possible that television did have a more potent effect on the individuals who viewed the campaign, but that the degree of its influence is concealed by selective factors which were not controlled in our analysis. To measure the comparative effects of the various media it will be necessary to track down these other factors and make allowances for them.

In the 1956 election there will be an opportunity to analyze the effects specifically and precisely, and it is to be hoped that such studies will be undertaken. By then television probably will have expanded its coverage of the nation so greatly that the sociological pattern of its audience, and of the other media audiences, will be substantially different from what it was in the 1952 campaign. The direction of these changes will itself be revealing as to the nature of television’s impact.

Another word of caution should be added. The 1952 data apply only to the audiences for political broadcasting and reporting. It cannot be assumed that the same pattern of media preferences would be found in other areas of information or entertainment.