Television over the Telephone Sends Images of Speakers (Oct, 1938) 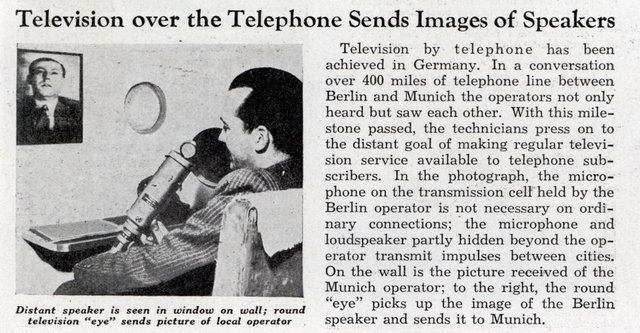 Television over the Telephone Sends Images of Speakers

Television by telephone has been achieved in Germany. In a conversation over 400 miles of telephone line between Berlin and Munich the operators not only heard but saw each other. With this milestone passed, the technicians press on to the distant goal of making regular television service available to telephone subscribers. In the photograph, the microphone on the transmission cell held by the Berlin operator is not necessary on ordinary connections; the microphone and loudspeaker partly hidden beyond the operator transmit impulses between cities. On the wall is the picture received of the Munich operator; to the right, the round “eye” picks up the image of the Berlin speaker and sends it to Munich.