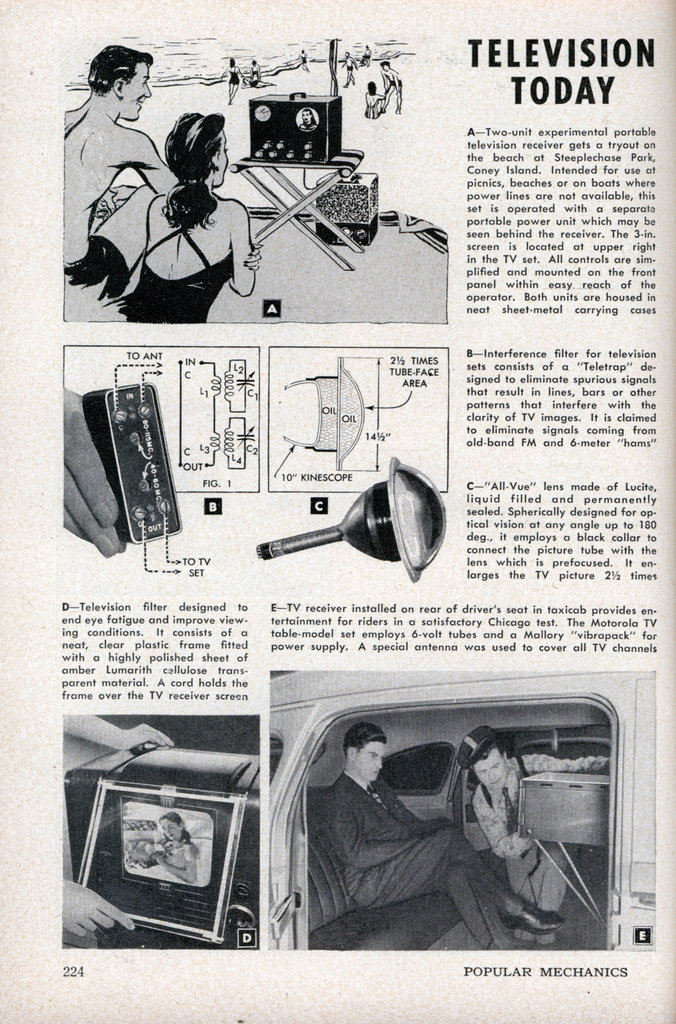 A—Two-unit experimental portable television receiver gets a tryout on the beach at Steeplechase Park, Coney Island. Intended for use at picnics, beaches or on boats where power lines are not available, this set is operated with a separate portable power unit which may be seen behind the receiver. The 3-in. screen is located at upper right in the TV set. All controls are simplified and mounted on the front panel within .easy reach of the operator. Both units are housed in neat sheet-metal carrying cases

B—Interference filter for television sets consists of a “Teletrap” designed to eliminate spurious signals that result in lines, bars or other patterns that interfere with the clarity of TV images. It is claimed to eliminate signals coming from old-band FM and 6-meter “hams”

C—”All-Vue” lens made of Lucite, liquid filled and permanently sealed. Spherically designed for optical vision at any angle up to 180 deg., it employs a black collar to connect the picture tube with the lens which is prefocused. It enlarges the TV picture 2-1/2 times

E—TV receiver installed on rear of driver’s seat in taxicab provides entertainment for riders in a satisfactory Chicago test. The Motorola TV table-model set employs 6-volt tubes and a Mallory “vibrapack” for power supply. A special antenna was used to cover all TV channels