Screw the iPhone. I’m getting a record player for my car. 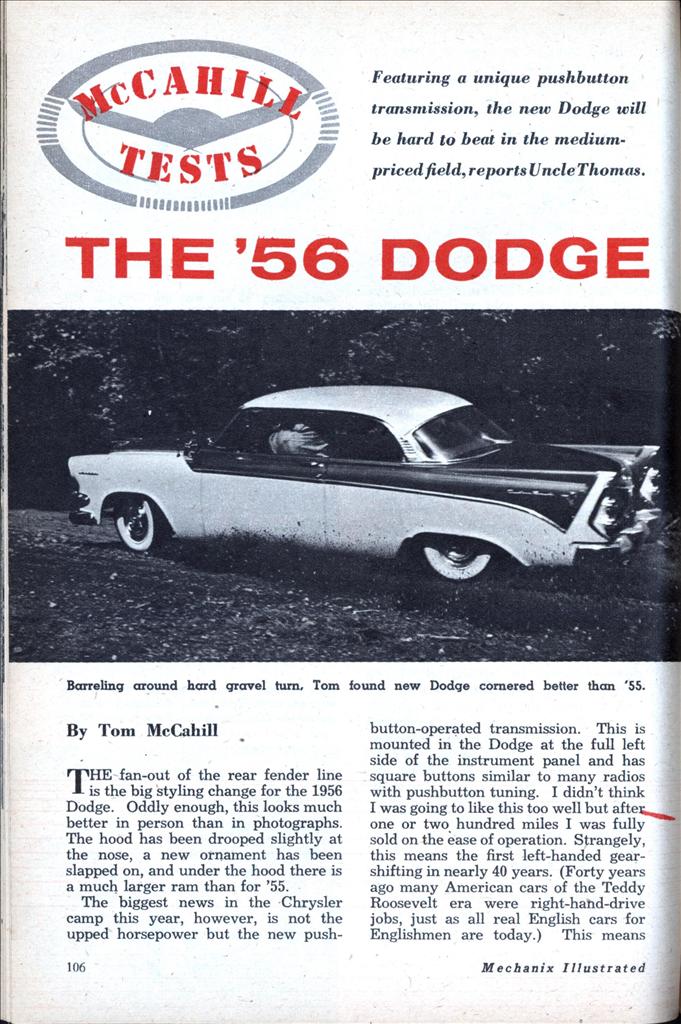 Featuring a unique pushbutton transmission, the new Dodge will be hard to beat in the medium-priced field, reports Uncle Thomas.

THE fan-out of the rear fender line is the big styling change for the 1956 Dodge. Oddly enough, this looks much better in person than in photographs. The hood has been drooped slightly at the nose, a new ornament has been slapped on, and under the hood there is a much larger ram than for ’55.

The biggest news in the Chrysler camp this year, however, is not the upped horsepower but the new push- button-operated transmission. This is mounted in the Dodge at the full left side of the instrument panel and has square buttons similar to many radios with pushbutton tuning. I didn’t think I was going to like this too well but after, one or two hundred miles I was fully sold on the ease of operation. Strangely, this means the first left-handed gear-shifting in nearly 40 years. (Forty years ago many American cars of the Teddy Roosevelt era were right-hand-drive jobs, just as all real English cars for Englishmen are today.) This means that the left hand, fully neglected for four decades, except for occasionally steadying the steering wheel, adjusting your hat or throwing bricks at cops, now has a role to play in driving.

The operation of this transmission is childish in its simplicity. Mounted in a diamond pattern, the top button has a big, fat N on it which stands for Neutral (not Nuts). This must be pushed in before the key starter will work. Going around the diamond clockwise, the next button has a D for Drive. At the bottom of the diamond we find the L for Low and at the nine o’clock position a big R which, naturally, stands for Rutabaga. I repeat once again, I didn’t think I’d like this pushbutton deal but I was wrong. I do.

Bill Newberg, Dodge’s youngish prexy, made the opening kick-off for the Chrysler Corporation’s ’56 season. After suffering seriously from buyer stay-awayitis, Dodge pulled a comeback in ’55 with a line of cars that were considered by many to be the best-looking on the road. Newberg, who came up through the ranks the hard way, from the days he was a Chrysler test driver, realized that one quick punch should immediately be followed by another. In 1955, Dodge had its first taste of volume buyer blood in a long time. And though these successful models were less than ten months old, the 1956 cars were introduced in early October.

Due to the fact that the Chrysler Proving Grounds were tied up by a band rehearsal or an Elk’s clambake before the new model announcement date, a Dodge was shipped to me, at my own New Jersey proving grounds, under the cover of darkness in a plain, un-marked envelope. Mr. P. Whiteman, who is a car nut’s nut, was on hand for the unveiling which took place in my front yard. I will quote the Denver fiddle player’s words as closely as I can remember, after he had made three full laps around the car: “That’s the best-looking fender line I’ve ever seen on an American car.”

Paul was referring to the new flare-up (Flight Sweep) fenders. After another turn or two he announced, “That’s the best-looking American car I’ve seen in a long time.” The car was a three-tone, two-door Custom Royal Lancer and though I attempt to keep my enthusiasms under more control than the Dean of American Windwhippers, I was forced to admit that it is a damn good-looking automobile.

My first test runs took place at night. The instrument panel lighting is extremely pleasing—in fact, almost glamorous. Unfortunately, the instruments are on the small side and not too easy to read, except for the speedometer. Something that impressed me was the quietness of the ride. Inside cabin noise, which means everything from a baritone boom to mouse-like squeaks, were totally absent. The engine noise was practically non-existent and the transmission not only operated smoother than my ’55 Dodge station wagon but didn’t have the God-awful gear scream when running up the rpm in the low end of Drive.

This car corners better and plows less than the ’55. In fact, the rear held so well in my gravel spin corner that when I purposely tried to full-spin it, I only succeeded in getting about half way around. Barreling through hard gravel corners at speed, only the slightest correction was needed to get back on course when it drifted out too far. This is a good road car and therefore a safe automobile.

The full-time power steering is quick and sure but when I first took this car on test, it had a bad front-end shimmy developing at about 55 mph and ending at around 60. The shimmy was so bad it erased all thoughts of any high-speed, running until I had it corrected. Earl Miller, my local Chrysler-Plymouth dealer, went to work on balancing the front wheels which took 7% ounces of lead on one wheel and 9 on the other. Tubeless tires? Phooey! Just make ’em round and balanced, boys. I can’t help but think how some neophyte buying his first car could get crossed up and in really serious trouble through badly balanced wheels. Even if he never drove faster than the Legal limits, the wear caused by an unbalanced wheel at key points such as king pins, wheel bearings, steering mechanism and even engine support’s, could wear a car out in half its normal time if not corrected.

The performance of this ’56 Dodge has been very noticeably improved and the reason is rather simple to find. The cubic-inch displacement has been raised from 270 cubic inches to 315. This 45 cu. in. addition holds the secret. In spite of adverse criticism from the cloak-and-dagger, windscreen-and-bon- net boys of automobildom, when you want oomph and power you just can’t beat inches (meaning cubic inch displacement) . It is like trying to get the same performance out of a 20-gauge gun that you can get out of a 12-gauge. You can kill ducks with a 20-gauge, and thousands are killed every year with this weapon, but the big 12 can kill them just a little deader and quite a few paces farther away.

Like the 12-gauge gun over the 20, the new Dodge has 12-bore volume and really pays off when digging from a traffic light or getting through a tight squeeze while passing. On the car I tested, the engine was the new Super-Powered Super Red Ram 230-hp kit job, which includes a four-barrel carburetor. (How do you like that fancy nomenclature, “Super-Powered Super Red Ram?” You could kill a duck with that name alone.) This increase has been done without upping the compression ratio abnormally, it being 8:1 in this current world of 9, 9.5 and 10:1.

Also belted by a new 12-volt ignition system, these jobs can do a sizzling 0-60 mph in 10.4 seconds on a fully-corrected speedometer. The speedometer on the car was 11 per cent out at 60 mph. Very few cars will embarrass this job in the getaway and performance departments. Zero to 30 mph took 3.8 seconds; 0-50 was 7.6 and 0-70 was 14.6. If you don’t think this is terrific performance, get out some of your old Mis and check what other cars have done in recent years.

In September on the salt flats a new Dodge broke 306 AAA records, averaged 92.86 mph for 14 continuous days and went a total of 31,224 miles during this time. The competition-tuned Dodge at the salt flats managed to hit 115.2. When I made my top speed runs in a neighboring state there were some severe early-morning quartering winds, which made pin-point accuracy impossible, and the car was in highway tune, not competition tune, which easily knocks off two or three mph. Our average, however, varied betwen 109 and 112 mph.

In summing up. These are undoubtedly the greatest cars in Dodge’s long history, by far. The interior appointments and comforts are equal to the most expensive standard automobiles on the road and this is a car that would be hard to beat in the medium-price field. Gasoline economy is nothing to get excited about but, all in all, this is a great vehicle and I sincerely recommend it as a top offering. •