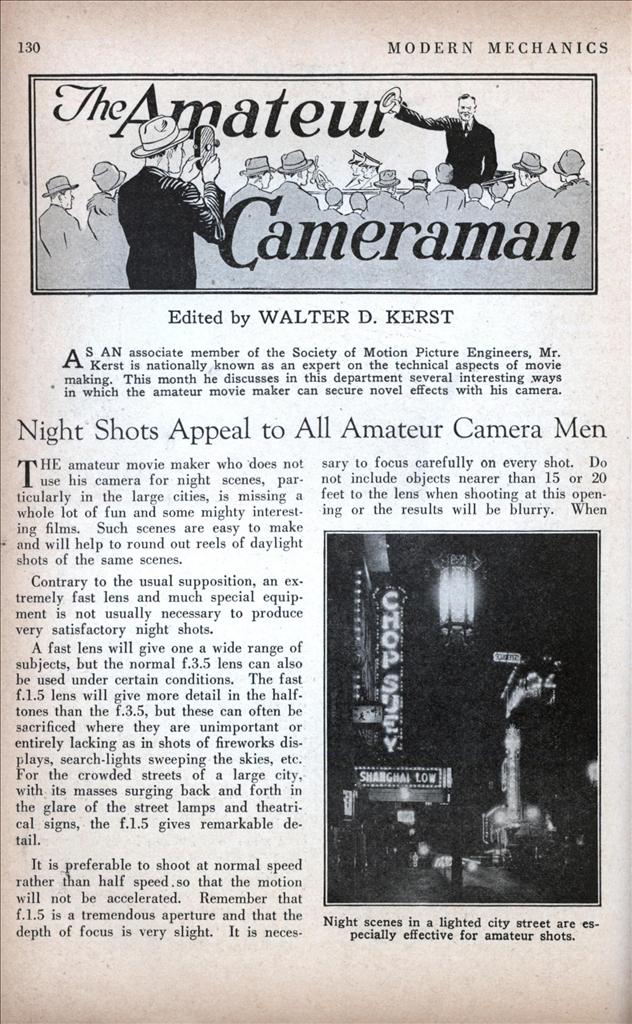 AS AN associate member of the Society of Motion Picture Engineers, Mr. Kerst is nationally known as an expert on the technical aspects of movie making. This month he discusses in this department several interesting ways in which the amateur movie maker can secure novel effects with his camera.

THE amateur movie maker who does not use his camera for night scenes, particularly in the large cities, is missing a whole lot of fun and some mighty interesting films. Such scenes are easy to make and will help to round out reels of daylight shots of the same scenes.

Contrary to the usual supposition, an extremely fast lens and much special equipment is not usually necessary to produce very satisfactory night shots.

A fast lens will give one a wide range of subjects, but the normal f.3.5 lens can also be used under certain conditions. The fast f.1.5 lens will give more detail in the halftones than the f.3.5, but these can often be sacrificed where they are unimportant or entirely lacking as in shots of fireworks displays, search-lights sweeping the skies, etc. For the crowded streets of a large city, with its masses surging back and forth in the glare of the street lamps and theatrical signs, the f.1.5 gives remarkable detail.

It is preferable to shoot at normal speed rather than half speed so that the motion will not be accelerated. Remember that f.1.5 is a tremendous aperture and that the depth of focus is very slight. It is neces- sary to focus carefully on every shot. Do not include objects nearer than 15 or 20 feet to the lens when shooting at this opening or the results will be blurry. When using the f.3.5 for night work, a half speed of the film in the camera, or 8 exposures a second instead of 16, is desirable, so as to insure the fullest exposure possible.

Night work is by no means limited to the amateur in the large city. Particularly is this true in the winter, when the snow lies heavily on the ground. A corner in the little town, illuminated by the corner arc lamp, plus the bright reflection from the snow, will give some interesting silhouette effects. An f.1.5 lens and half speed of the film is necessary here. Do not attempt to get detail but place the subjects between the light source and the lens, so that they will be in silhouette.

Another interesting night shot is that of a camp-fire. The fire, with the figures silhouetted before it or placed at the side so that the glare of the flames will light up the faces, will be most realistic on the screen. With the f. 1.5 lens, camera at half speed, and panchromatic film, a good picture can be secured.

When using only the ordinary film, which is not sensitive to the red and yellow of the flames, it will be necessary to use one or two flares in a hole dug in the ground, directly beneath the fire. The flares burn a sufficient length of time for photographing a normal scene. The white smoke given off during their burning will add to the effect. Flares may be purchased at small cost.

MANUFACTURERS of all kinds, particularly those of commodities that are too bulky or that cannot be shown by their salesmen to prospective buyers, are turning more and more to the 16 mm. film and projector as a selling agent. Take the manufacturers of farm tractors, for instance.

Heretofore the salesman had only his vocabulary and a few small pictures in a catalog, perhaps, with which to sell his prospect. It would hardly be practical for him to have a tractor shipped a great distance to help close a sale. But the next best thing to the tractor itself is a movie of it in operation, that can be run off for the prospective buyer right in his office, with a minimum of time and trouble. With his compact portable 16 mm. projector and a little daylight screen that fits in the case with the projector, he brings the most conclusive argument possible right to the buyer’s desk. It is needless to repeat that “seeing is believing,” and that this method of salesmanship is gaining great popularity in the industrial field. Also more concerns each day are using the 16 mm. movie as an advertising medium, as through it they can reach a tremendous field in a manner that cannot be surpassed in any other way. A few years hence will probably see a large number of concerns offering ]6 mm. subjects showing their products. The Gorham Silver Company recently inaugurated the distribution to amateurs of many 16 mm. prints of an excellent three-reel subject showing the making of their silver and bronze products. Other concerns are falling in line and it will not be long before all the manufacturers of America will be sold on the idea that “seeing is believing.”

In projecting your film, you have no doubt noticed that some scenes, denser than others, held back a lot of light from the screen, while others let a lot of light through to the screen. By using the rheostat control on your projector during the showing of the film, you can control the amount of light reaching the screen. When a dense scene appears, crowd all the light possible through the film by pushing the ammeter dial up to its full amount. Likewise, reduce it to its lowest reading when the filnt image is thin. By varying the projector light in this way, you can get a professional-like showing and one that is much better than if the projector is started and left alone until the reel has been run.

Here’s another little refinement. When letting up your screen and projector to get the proper size image to fit the screen, make the throw of the projector so that the edges of the picture all around will extend slightly over the black frame or border surrounding the screen. The black will “kill” the light from the picture on it, and the picture will frame very nicely on the screen.

Do not place the screen too low in relation to the eye-level of your audience and do not place the first row too near the screen. If you are using a glass bead screen, keep your audience confined to within a narrow angle in front of it. This is because quite a percentage of light is lost to those viewing a picture from an extreme angle with this type of screen. When using an aluminum screen the audience can be spread out at more of an angle, as this is a diffusing surface, and spreads the light consideraby..

A FASCINATING pastime for the amateur during the winter months is that of making microscopic movies. This type of shooting is increasing greatly among movie enthusiasts and they are getting no end of fun and education from it. An interesting use to which the microscope and the 16 mm. camera has been put recently is that of taking micro-movies of uncut diamonds so as to detect any flaws in the stones. This is far superior to taking still micro pictures as the stone can be turned in every conceivable way while being photographed, leaving no possibility for the flaw to escape the microscope’s all-seeing eye.

The illustration shows a 16 mm. camera attached to the microscope by means of the Microphote, or microscope adapter, the reflex focuser, for focusing the image sharply, and the microstage, holding in this case, a prepared slide with specimen. A strong light is directed by the reflecting mirror beneath the stage. This mirror throws the light upward, illuminating the subject on the slide.

Focusing is done through the eyepiece set near the front of the camera. The camera is equipped with the hand crank so that speed of the film may be controlled to obtain correct exposure. In making micro-movies the camera lens is removed, the lens of the microscope serving instead.

Always use a filter when making tele-photo shots.

Make telephoto pictures only on days when the atmosphere is clear as crystal. Otherwise the haze in the air will destroy definition.

Always use a tripod when making shots with three, four and six inch lenses.

Try a closeup of a person with a four or six inch lens. Due to the distance of the camera, all camera consciousness and nervousness will disappear.

Be sure you do not use too long a tele-photo lens on subjects too near the camera. Remember that the field of view is narrowed considerably as you increase the focal length of the lens, and you are liable to eliminate an important part of the scene.

Under-expose telephoto shots slightly so as to increase the contrast.

Focus all telephoto shots accurately, as a slight error will mean the difference between success and failure.

A. This is done by manipulating the lens diaphragm, while shooting a scene. To get a fade-out or in of proper length it is necessary that the scene call for an exposure of f. 5.6 or more. To fade in, press the button with the hand held over the lens and the diaphragm set at f. 16. Slowly remove your hand and then slowly open the diaphragm stop to the proper setting for the scene. To fade out reverse the action, bringing the hand over the lens at the end so as to exclude all light from the film.

A. Get in the habit of oiling your projector each time after running three 400-foot reels. Don’t squirt the oil into the holes but merely put a drop in each one. Too much oil is almost as detrimental as too little. It will get on your film and ruin it. Wipe sprockets, idlers and the film channel with a soft, lintless rag after oiling.