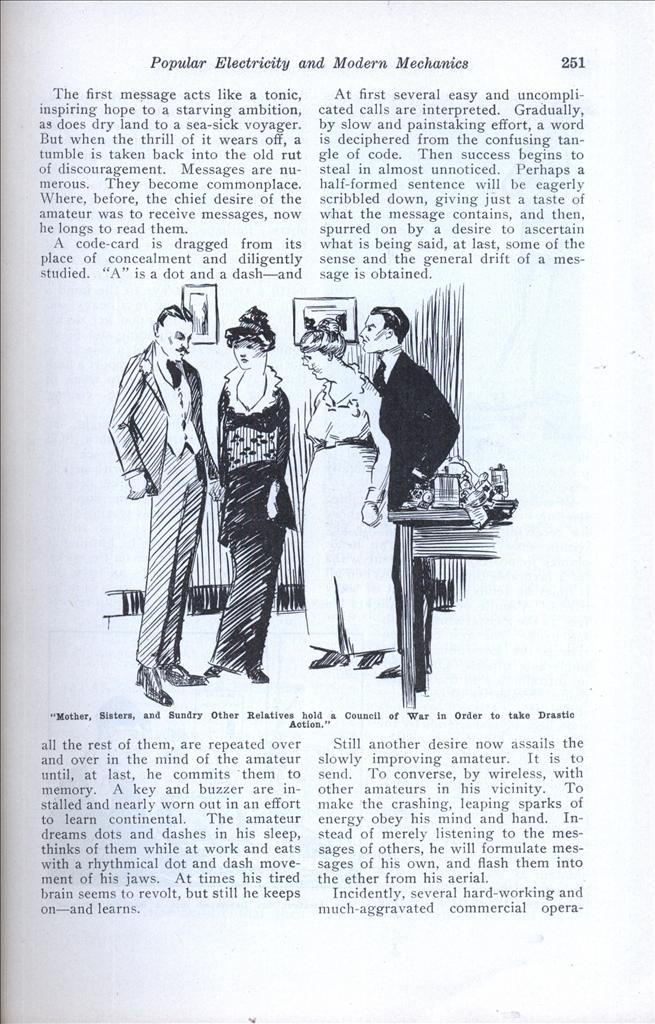 Wireless amateurism is a craze of high order and rather difficult to sustain. The enthusiastical effect of crashing sparks and the lure of hidden potentialities, are neutralized when confronted by unexpected technicalities and the prospect of never-ending study. But he who survives the first six months of groping into its mysteries is doomed to success.

An aspiring wireless amateur’s first desire is to “pick up” messages. With this end in view, every piece of stray wire, scraps of brass, and homeless insulators are gathered together for use in the construction of a receiving set. Frequent trips to electrical shops serve to increase the supply of “junk.” Choice bits of brass and wire are utilized in constructing the first detector and loose coupler. The remainder is preserved for future use. But the supply of “junk,” gathered from everywhere, soon displays alarming proportions, with the result that mother, sisters and sundry other relatives hold a council of war in order to take drastic action. The verdict of the assembly, in effect, is that rooms were designed to harbor human beings, so the wireless “fiend” constructs a “shack” in the back yard and moves his “junk” therein.

This shack is shunned by all except wireless experimenters. None others dare venture within. Huge coils of wire, mysterious looking instruments, odorous chemicals and seemingly omnipresent electric shocks strike terror to the heart of uninformed transgressors.

Undisturbed in his new quarters, the amateur continues to construct his instruments. Soon a towering aerial stretches majestically skyward and numerous guy wires branch out as if their sole purpose in existence was to trip up unwary pedestrians. Several shelves in the shack sag danger- ously under their load of electrical magazines, catalogs and technical books, unceremoniously crowding out dime novels and other useless literature. These latter books, relics of bygone days, are used in the air-tight heater at times when the sun has failed in its efforts to keep ”jack frost” in submission.

The “gang” nightly assembled at the corner miss one of their former members. Whispered conversation indicates that he has degenerated into one of those “scientific ginks” wasting perfectly good time on such useless fads as wireless. The appearance of an aerial confirms their suspicions. Little concerned, though with an inward feeling of pity for one who devotes his time to study, they go their way, discussing such weighty matters as the latest style in sporty sox, or why certain seemingly intelligent young ladies reject their uninvited advances.

Although left strictly alone by his former associates the amateur soon finds new friends among the workers in his chosen field.

Then comes the thrill of his first message!

Many assembled instruments, the result of weeks of labor, are carefully connected in order. Eagerly he places the head ‘phones in position and throws the aerial switch, then the loose-coupler is carefully manipulated, in changing from wave to wave. But not a sound, as yet, can be heard. A little sigh of tired toleration escapes his lips. Disappointments are becoming remarkably commonplace. Some defect must have occurred in construction.

But wait! He has found it! Dominated by excitement he had neglected to “set” the detector. This trifling, though necessary, detail is attended to, and again he is on the alert. Then, in the ‘phones, a faint grating sound is heard. He breathes a sigh of relief. That feeble splash of static indicates that the set is in working order. With nerves on edge he waits and hopes. Then his efforts are rewarded. From out of the stillness of the night comes a faint purring string of flickering dots and dashes. Snatched from the vibrating ether by his aerial and made audible by sensitive instruments, they whisper that his toils have not been in vain.

His first message! The light of victory shines within his eyes. The blood surges through his arteries. His soul thrills with joy. Hours of study and work have been consumed; disappointments have been choked down; seeming impossibilities have been overcome, and now success is his. An unbounded, passionate, hope-inspiring feeling of pleasure dominates his spirit.

The little message speeds on its way, and the cold, practical, commercial operator, shooting it out on his key, little dreams of the joy he has induced into the heart of a tireless student.

Not a word is deciphered by the amateur, nor a single dot or dash understood. The mysteries of the continental code have yet to be fathomed. But that does not trouble him. Operating will come by practice. The climax of his ambition has been attained in the voice of the invisible ether.

Little does the amateur dream of the long hours of study to which he will fall heir in the struggle to become an operator.

The first message acts like a tonic, inspiring hope to a starving ambition, as does dry land to a sea-sick voyager. But when the thrill of it wears off, a tumble is taken back into the old rut of discouragement. Messages are numerous. They become commonplace. Where, before, the chief desire of the amateur was to receive messages, now he longs to read them.

A code-card is dragged from its place of concealment and diligently studied. “A” is a dot and a dash—and all the rest of them, are repeated over and over in the mind of the amateur until, at last, he commits them to memory. A key and buzzer are installed and nearly worn out in an effort to learn continental. The amateur dreams dots and dashes in his sleep, thinks of them while at work and eats with a rhythmical dot and dash movement of his jaws. At times his tired brain seems to revolt, but still he keeps on—and learns.

At first several easy and uncomplicated calls are interpreted. Gradually, by slow and painstaking effort, a word is deciphered from the confusing tangle of code. Then success begins to steal in almost unnoticed. Perhaps a half-formed sentence will be eagerly scribbled down, giving just a taste of what the message contains, and then, spurred on by a desire to ascertain what is being said, at last, some of the sense and the general drift of a message is obtained.

Still another desire now assails the slowly improving amateur. It is to send. To converse, by wireless, with other amateurs in his vicinity. To make the crashing, leaping sparks of energy obey his mind and hand. Instead of merely listening to the messages of others, he will formulate messages of his own, and flash them into the ether from his aerial.

Incidently, several hard-working and much-aggravated commercial opera- tors in the neighborhood will profoundly and in a very emphatic manner denounce all amateurs. This, more especially, was the case before the recent Government regulations went into effect.

The amateur must first construct his transmitting apparatus, which he proceeds to do. A bulky, out of proportion transformer, questionable looking condensers, a ridiculously ill-designed, small-wire helix, and a spark-gap constructed to produce deafening noise, are gradually assembled.

Proudly he sits before his table: sending instruments to the right, those for receiving to the left, and the key within easy reach. With the headphones in position, the amateur waits for a favorable opportunity. When all is quiet he sends out the call of some friend. A smile of triumph lights his face as the answer comes flashing back. The first conversation is the fore-runner of innumerable others. One needs no introduction in the wireless game. Similarity of purpose is sufficient. Utter strangers soon become fast friends by the aid of the blue-white sparks. Amateurs, hearing each other for the first time, will exchange confidences, arrange to meet and become acquainted. In this way the majority of the amateurs within their sending range become friends.

By continual practice the amateur is soon able to read and copy commercial and naval messages. When this stage of development is reached wireless becomes highly interesting. To “listen in,” with first-class instruments, is like entering into a new existence where one can reach out and feel the pulse of the world for a thousand miles around. Ships hundreds of miles to the north or south, or far out at sea, are heard giving their positions and weather reports. Perhaps, at the amateur’s station, the weather may be clear and calm, with myriads of bright stars shining overhead, while far, far to the north a report portrays to the mind a ship floundering along in a heavy sea, with the rain beating upon her decks, and the sky dark, forbidding and cloud-bound. The next moment, a ship far in the opposite direction will report a high temperature, causing one to think of lounging on deck sipping cooling drinks.

Sometimes, in the silent night, far away, will be heard the frantic SOS distress call of a helpless vessel. Instantly the ether vibrates with action. Ships and land stations alike, keep in touch with each other; the ships reporting their progress, as tearing along through the waters they rush to the rescue. The vessel may be burning at sea, or breaking to pieces on the rocks, and a sigh of relief goes up from the many listeners, some hundreds of miles away, when the first relief ship reports reaching the scene of the disaster.

The amateur has now developed into a reliable operator, his one ambition being to receive “long-distance.”

Along about midnight, when the busy world lies sleeping, all long-distance work is performed. At this time, the rays of the sun, far out of sight, no longer interfere with wireless ether oscillations. The amateur, developed into an operator, sits alone in his silent little room. The head-phones are pressed tightly against his ears; his hand slowly tunes the instruments to different wave lengths. Everything is set to marvelous sensitiveness. In absolute stillness he listens. Then a faint, almost inaudible whisper vibrates within the phones. Scarcely breathing for fear of making a sound, he waits for the “sign.” If no other disturbances occur, he receives it, and a thrill of satisfaction takes place when he realizes that a station two thousand miles away has been heard. On exceptionally good nights these messages can be copied, but at times they are so faint that the scratching of a pencil on paper drowns out the sound. The amateur is satisfied if the “sign” can be read, as that discloses the identity of the station.

When this stage of the game is reached—a matter of years if the amateur is self-taught—he is in his glory. His ambition has been realized. But with its realization new ones are born and the amateur works on and on.