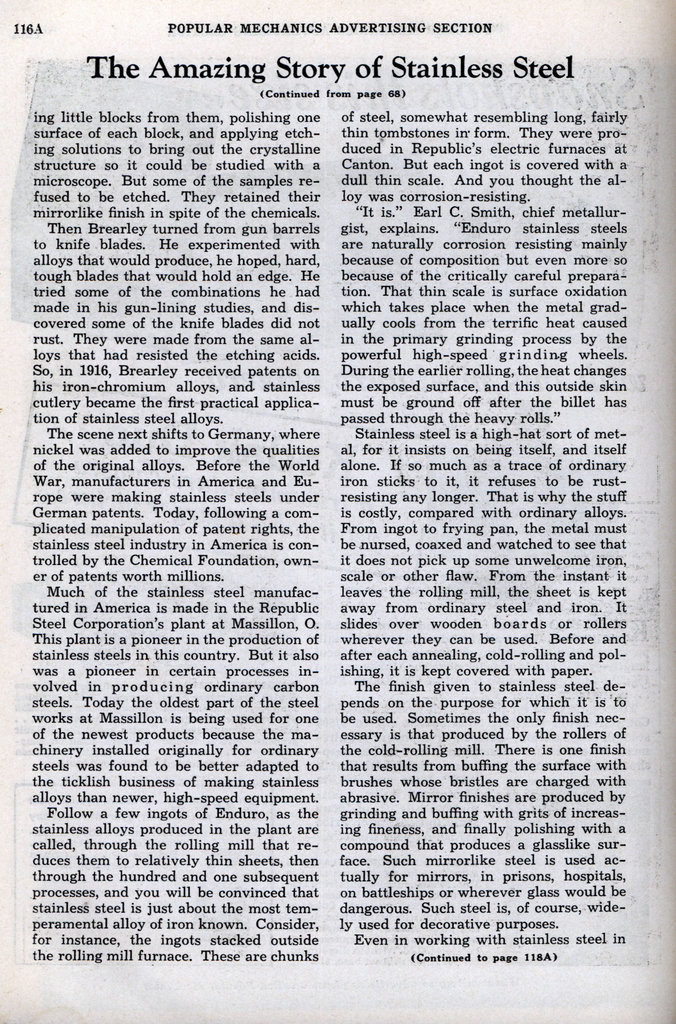 Today, as the result of the struggles, we have stainless steel, wonder alloy that promises to work amazing changes in almost every activity involving steel, particularly the automotive and aviation industries.

The story of present-day rust-resisting steel alloys really began in 1912 and a number of men have had a part in the research. Elwood Haynes of Kokomo, Ind., in an attempt to make spark-plug points that would not corrode and pit, melted iron with nickel, cobalt and chromium. He came very close indeed to a great discovery. Five years later, at the great Krupp works in Germany, Benno Strauss poked about among alloys of iron, nickel and chromium, trying to find a material from which he could make better tubes for pyrometers used in measuring very high temperatures.

Here and there, during the next decade, experimenters tried combinations of the three important metals now found in stainless steels in attempts to make such things as scale-resisting castings and alloys that would withstand the cutting action of the oxyacetylene flame. Mixing iron with chromium was not new, for chromium steel made in crucibles had been in use since 1869 for manufacturing locks, crusher parts and burglarproof safes.

But it remained for Harry Brearley, head of a steel company research laboratory at Sheffield, England, to stumble onto the most important property of iron-chromium combinations, their resistance to corrosion. Brearley was trying to find a better metal for lining the bores of big guns. The life of such guns, ordnance officials complained, was too short, largely because of the action of heat and corrosion on the bore. The heat developed in firing a single shot was, in large-caliber guns, high enough to melt a thin film of the metal then being used. In addition, the corrosive action of chemical products of explosions attacked the bore.

Brearley knew that a steel that does not contain much carbon cannot be melted as easily as one having a high percentage. By reducing the carbon in the gun-lining steel, he ought to raise the melting point. But something had to be done to retain the hardness. He knew chromium-iron alloys were hard, and stood up well against heat. So he mixed iron and chromium in various proportions, put them through all kinds of tests but could not produce a gun lining that would meet all the requirements.

Part of his testing of these experimental steels consisted of sawing little blocks from them, polishing one surface of each block, and applying etching solutions to bring out the crystalline structure so it could be studied with a microscope. But some of the samples refused to be etched. They retained their mirrorlike finish in spite of the chemicals.

Then Brearley turned from gun barrels to knife blades. He experimented with alloys that would produce, he hoped, hard, tough blades that would hold an edge. He tried some of the combinations he had made in his gun-lining studies, and discovered some of the knife blades did not rust. They were made from the same alloys that had resisted the etching acids. So, in 1916, Brearley received patents on his iron-chromium alloys, and stainless cutlery became the first practical application of stainless steel alloys.

The scene next shifts to Germany, where nickel was added to improve the qualities of the original alloys. Before the World War, manufacturers in America and Europe were making stainless steels under German patents. Today, following a complicated manipulation of patent rights, the stainless steel industry in America is controlled by the Chemical Foundation, owner of patents worth millions.

Much of the stainless steel manufactured in America is made in the Republic Steel Corporation’s plant at Massillon, O. This plant is a pioneer in the production of stainless steels in this country. But it also was a pioneer in certain processes involved in producing ordinary carbon steels. Today the oldest part of the steel works at Massillon is being used for one of the newest products because the machinery installed originally for ordinary steels was found to be better adapted to the ticklish business of making stainless alloys than newer, high-speed equipment.

Follow a few ingots of Enduro, as the stainless alloys produced in the plant are called, through the rolling mill that reduces them to relatively thin sheets, then through the hundred and one subsequent processes, and you will be convinced that stainless steel is just about the most temperamental alloy of iron known. Consider, for instance, the ingots stacked outside the rolling mill furnace. These are chunks of steel, somewhat resembling long, fairly thin tombstones in form. They were produced in Republic’s electric furnaces at Canton. But each ingot is covered with a dull thin scale. And you thought the alloy was corrosion-resisting.

“It is.” Earl C. Smith, chief metallurgist, explains. “Enduro stainless steels are naturally corrosion resisting mainly because of composition but even more so because of the critically careful preparation. That thin scale is surface oxidation which takes place when the metal gradually cools from the terrific heat caused in the primary grinding process by the powerful high-speed grinding wheels. During the earlier rolling, the heat changes the exposed surface, and this outside skin must be ground off after the billet has passed through the heavy rolls.”

Stainless steel is a high-hat sort of metal, for it insists on being itself, and itself alone. If so much as a trace of ordinary iron sticks to it, it refuses to be rust-resisting any longer. That is why the stuff is costly, compared with ordinary alloys. From ingot to frying pan, the metal must be nursed, coaxed and watched to see that it does not pick up some unwelcome iron, scale or other flaw. From the instant it leaves the rolling mill, the sheet is kept away from ordinary steel and iron. It slides over wooden boards or rollers wherever they can be used. Before and after each annealing, cold-rolling and polishing, it is kept covered with paper.

The finish given to stainless steel depends on the purpose for which it is to be used. Sometimes the only finish necessary is that produced by the rollers of the cold-rolling mill. There is one finish that results from buffing the surface with brushes whose bristles are charged with abrasive. Mirror finishes are produced by grinding and buffing with grits of increasing fineness, and finally polishing with a compound that produces a glasslike surface. Such mirrorlike steel is used actually for mirrors, in prisons, hospitals, on battleships or wherever glass would be dangerous. Such steel is, of course, widely used for decorative purposes.

Even in working with stainless steel in the shop, care must be taken to keep ordinary iron and steel away from it. Forming dies, vise jaws and other tools frequently are protected with adhesive tape or paper. When this cannot be done, the stainless steel is given a nitric-acid treatment to remove traces of foreign particles, after forming. The nature of the ingredients also contributes much to the cost. Besides the iron itself, there are in various stainless alloys, chromium from Africa; nickel from Sudbury, Ontario; molybdenum from Colorado, and columbium, titanium, selenium and zirconium.

Stainless steel used for automobile running board molding, wipers, louvers and other parts, usually contains sixteen to eighteen per cent chromium. A steel developed for resisting dyeing solutions in the textile industry contains molybdenum. The addition of selenium gives a steel that can be machined well.

Uses to which stainless alloys have been put include kitchen sinks, table tops, cutlery, cooking utensils, plates for false teeth, even the teeth themselves, dental and surgical instruments, decorative panels, moldings and other trim for both inside and outside of buildings, automobile parts, airplane exhaust collector rings and numerous engine and fuselage parts and instruments, contact points for traffic light control equipment, bolts, nuts, rivets, screws, linings for food barrels, decorative tableware, candlesticks, loving cups, parts for boats and etched panels.

These are but a few of the thousands of applications, all the more astonishing because stainless alloy steel has been commercially available for little more than a generation, while its cost, compared with other metals, is highâ€”sometimes $1.50 a pound in special forms. Even in scrap form, this mirror-finish stainless steel is worth twenty cents a pound.

But in spite, of its brilliant record, metallurgists say that only a beginning has been made. Partly because of a lowering

of cost, partly as a result of better design of the article being manufactured, and because of the development of improved alloys, stainless steel is likely to cause changes in many fields, particularly the automobile industry and aviation.

J. H. Fishel, Republic Steel Corporation expert in stainless steel, predicts that stainless alloy automobiles, requiring no paint or other finishing, will be commonplace tomorrow. Today such a car would cost too much. But with the production of high-strength stainless steel alloys, cheaper methods of production, and the streamlining of cars so their parts will be easy to make, non-rusting automobiles will be made available to everyone.

The airplane of the future, as envisioned by Mr. Fishel, will have all-metal wings consisting largely of strong, thin stainless sheet steel, stretched over a framework of the same material. Metallurgists already are at work on the problem of making suitable sheet material. Such planes will be stronger than those in use today, will be fireproof, and will require no special protection against corrosion.

Ordinary iron alloys rust for two. reasons. First, the iron is soluble in water, so oxygen can get to it and convert it into oxide. Second, the presence of moisture and other materials among the particles of iron in the metal creates little galvanic batteries, which destroy the iron by electrolytic action. In stainless steel, the chromium present in relatively high percentages has the happy property of changing itself into oxide very quickly, in a few seconds in fact, when exposed to air. Thus there is always, over the surface of a piece of stainless alloy, a very thin, tough layer of chromium oxide, which shields the particles of iron from attack by oxygen. Other ingredients such as nickel also exert a similar protective action, in addition to giving the steel other desirable properties. Elements such as columbium actually guard the individual grains of iron against oxygen, and thus prevent weakening and failure from intergranular corrosion.

Ordinarily, whenever the protective film of chromium oxide is broken, it heals so quickly that corrosion cannot begin, and the metal remains bright and sound. Occasionally a tiny pit, which cannot be sealed effectively by the chromium oxide, is present, and starts a local oxidation that may cause trouble. Likewise, the surface may be disfigured by corrosion of foreign particles of iron deposited by tools.

Few products have gone so far in so short a time as stainless steel alloys. What the future holds, no one can predict in full. Certainly rust will be less of a menace.