I wish I could have gone to the Gilbert Hall of Science when it was still there. The Eli Whitney Museum has a large collection of A.C. Gilbert material called The Gilbert Project if you’re interested. 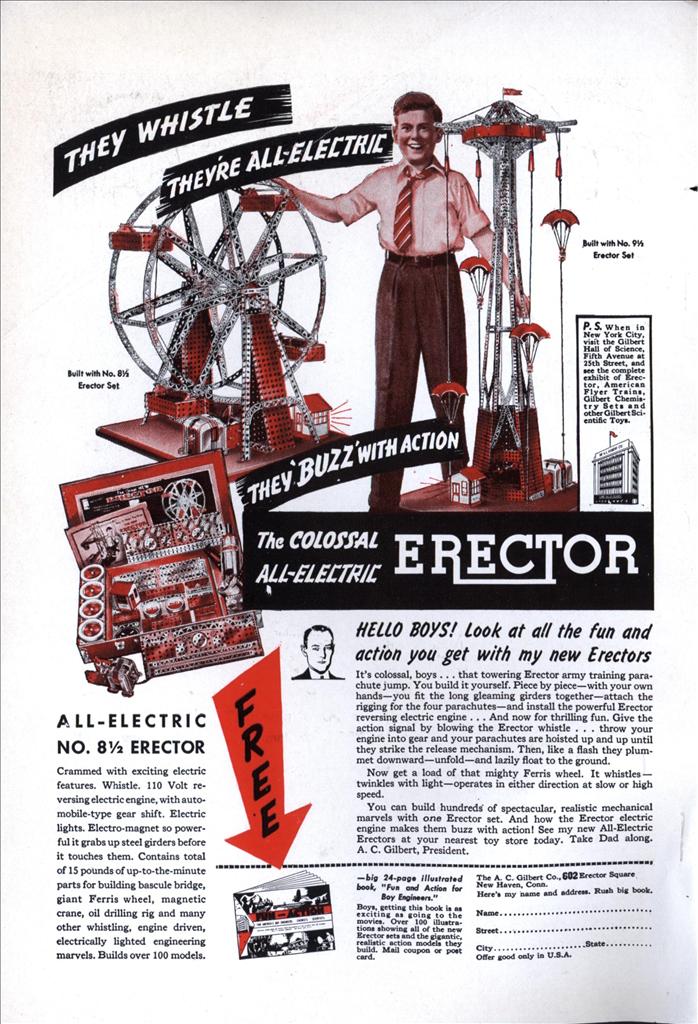 They ‘Buzz’ with Action!

HELLO BOYS! Look at all the fun and action you get with my new Erectors

It’s colossal, boys . . . that towering Erector army training parachute jump. You build it yourself. Piece by piece—with your own hands—you fit the long gleaming girders together—attach the rigging for the four parachutes—and install the powerful Erector reversing electric engine . . . And now for thrilling fun. Give the action signal by blowing the Erector whistle . . . throw your engine into gear and your parachutes are hoisted up and up until they strike the release mechanism. Then, like a flash they plummet downward—unfold—and lazily float to the ground.

Now get a load of that mighty Ferris wheel. It whistles — twinkles with light—operates in either direction at slow or high speed.

You can build hundreds” of spectacular, realistic mechanical marvels with one Erector set. And how the Erector electric engine makes them buzz with action! See my new All-Electric Erectors at your nearest toy store today. Take Dad along. A. C. Gilbert, President.

Boys, getting this book is as exciting as going to the movies. Over 100 illustrations showing all of the new Erector sets and the gigantic, realistic action models they build. Mail coupon or post card.