Good Housekeeping
Issue: Oct, 1955
Posted in: Sexuality, Sign of the Times
14 Comments on The Date Line – Facts and Fancies for the Girl in School (Oct, 1955) 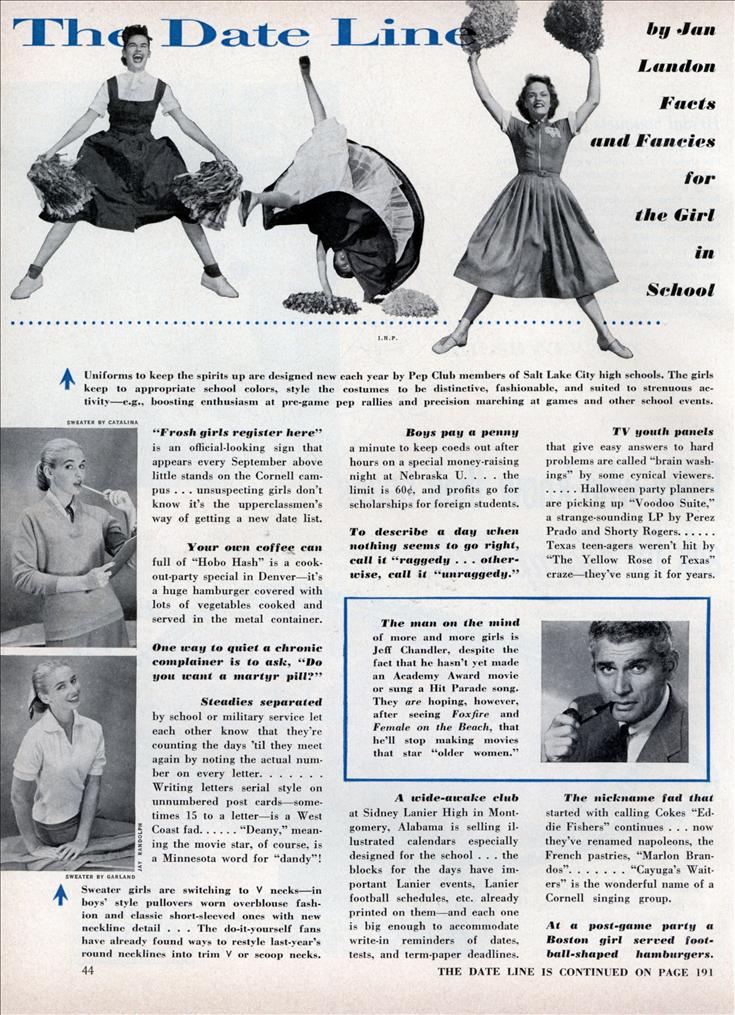 Facts and Fancies for the Girl in School

“Frosh girls register here” is an official-looking sign that appears every September above little stands on the Cornell campus . . . unsuspecting girls don’t know it’s the upperclassmen’s way of getting a new date list.

Your own coffee van full of “Hobo Hash” is a cook-out-party special in Denver—it’s a huge hamburger covered with lots of vegetables cooked and served in the metal container.

One way to quiet a chronic complainer is to ask, “Do you want a martyr pill?”

Steadies separated by school or military service let each other know that they’re counting the days ’til they meet again by noting the actual number on every letter…….Writing letters serial style on unnumbered post cards—sometimes 15 to a letter—is a West Coast fad……”Deany,” meaning the movie star, of course, is a Minnesota word for “dandy”!

Boys pay a penny a minute to keep coeds out after hours on a special money-raising night at Nebraska U. . . . the limit is 60c, and profits go for scholarships for foreign students.

To describe a day when nothing seems to go right, call it “raggedgy . . . otherwise, call it “unraggedy.”

A wide-awake club at Sidney Lanier High in Montgomery, Alabama is selling illustrated calendars especially designed for the school . . . the blocks for the days have important Lanier events, Lanier football schedules, etc. already printed on them—and each one is big enough to accommodate write-in reminders of dates, tests, and term-paper deadlines.

The man on the mind of more and more girls is Jeff Chandler, despite the fact that he hasn’t yet made an Academy Award movie or sung a Hit Parade song. They are hoping, however, after seeing Foxfire and Female on the Beach, that he’ll stop making movies that star “older women.”

TV youth panels that give easy answers to hard problems are called “brain washings” by some cynical viewers.

Texas teen-agers weren’t hit by “The Yellow Rose of Texas” craze—they’ve sung it for years.

At a post-game party a Boston girl served foot-ball-shaped hamburgers.

To publicize pinnings, Valparaiso U.’s Lambda Chi men salute girls newly pinned to members of their fraternity by lighting flares in the pattern of their Greek initials on the lawn of the sorority house involved…… It’s a fad for a boy to tie his steady’s scarf to the aerial of his car, in the fashion of knights of chivalry . . . the more frayed it is, the longer she’s been his!…… The most mysterious thing about the To Catch a Thief movie is why no one noticed before the remarkable resemblance between Cary Grant and band-leader Ray Anthony.

Girls wear black to the Sigma Alpha Epsilon Undertaker’s Ball at Louisiana State… they come to the party alone and have to look for their dates under a row of sheets!

An Oklahoma girl has a theory that you can tell where a girl comes from by the way she wears bobby socks . . . double cuffs at the ankle say she’s from the Southwest, no cuffs at all indicate the East, colored socks that match her sweater usually mean the Far West . . . and if her socks are rolled down to just above the ankle bone, she’s almost certainly from Iowa!

On “Joe-Nite” Saturdays Purdue U. coeds can wear slacks and scarf-covered pin curls to dormitory dinners……Everyone, including professors, has to wear tartan patterns during a fall “Plaid Week” at the University of Wisconsin……

“Button Bags” are a Boston fad, designed primarily as conversation pieces… The idea is to cover a cloth handbag with as many buttons as you can find and give that shy boy something to talk about.

Even mood-music addicts like the way Sammy Davis, Jr., handles the lyrics to torch songs in his “Just for Lovers” album……It happened last summer in Fayette, Alabama: So many of the boys were swept by a craze to dye their hair black that some annoyed girls took revenge by bleaching theirs blond!